The discovery of ecofacts in Liang Bua reveal that Flores was home to a distinct range of megafauna before modern humans inhabited the island.
© National Research Centre for Archaeology (ARKENAS) and University of Wollongong

The discovery of ecofacts at Liang Bua reveal that Flores was home to a distinct range of animals before modern humans inhabited the island.

Most of the wild mammals that today inhabit the island, such as wild boar, deer, porcupines, civets and monkeys, were introduced some 4 000 years ago by Neolithic farmers, based on the faunal record at Liang Bua. These animals were probably deliberately brought in as food stock, and turned feral. Other small mammals that are generally considered as pests, such as mice and rats, were likely unintentionally introduced by modern humans.

The ‘megafauna’ (giant animals) that existed alongside Homo floresiensis are very different. They include the giant rat, Komodo dragon, Marabou stork, large vulture and Stegodon (a primitive type of elephant). While the giant rat and Komodo dragon still exist in Flores today, the Marabou stork, large vulture and Stegodon are now extinct, disappearing around the same time as the Hobbit.

The Betu (local Manggarai language) (Papagomys armandvillei) is a large-bodied rat that has a long history on the island, dating back hundreds of thousands of years. The Betu has only been documented from Flores. It co-inhabited the island with Homo floresiensis and five to six other species of rat that are now extinct or extremely rare. So far, only two distinct species of giant rat have been found in Liang Bua – Papagomys armandvillei and Spelaeomys florensis. The Papagomys armandvillei in existence today, is large in size, is stout in body shape, has small ears, and is short-tailed. From head to tail it is between 40–45 cm in length. 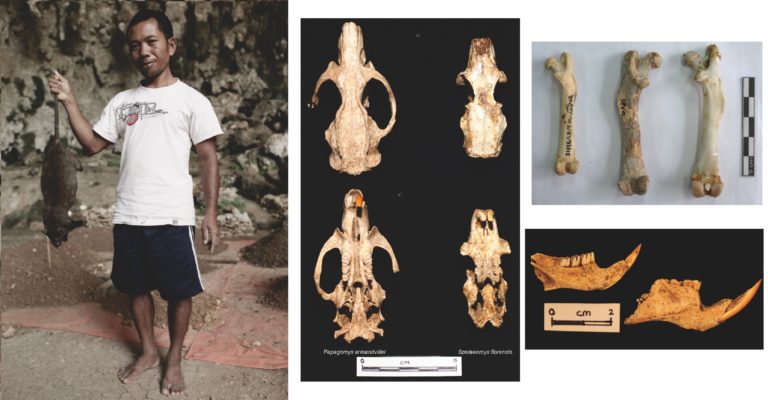 Although the Liang Bua stegodonts are small for proboscideans in general, they were likely the largest animals alive on Flores during the Late Pleistocene. They would have played an important ecological role, both as a herbivore, and as prey (i.e. hunted and/or scavenged by Homo Floresiensis and Komodo dragons). Thus, the exact timing of Stegodon extinction on Flores has significant implications for reconstructions of the island’s palaeoecology.

The Komodo dragon (Varanus komodoensis) is currently the largest lizard on Earth. Komodo dragon remains have been dated to as far back as 1 million years ago. Findings from Liang Bua and sites in Timor, Java, Australia and India indicate that they were once very widespread. They are now only found in limited patches along the north coast of Flores, and on nearby Komodo island, Rinca island and a few other small islands.

Komodo dragons are ambush predators and today prey mainly on large-to medium-sized animals, such as wild pig, deer and feral water buffalo. Before the introduction of these animals, however, they probably relied on Stegodon as their main food – and the occasional hominin. It is not clear yet if Komodo dragons were eaten by Homo floresiensis, or whether they were attracted to Liang Bua by carcasses brought in to the cave by Homo floresiensis. 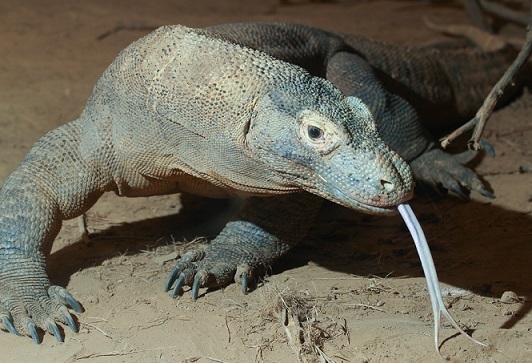 Liang Bua has yielded the largest assemblage of fossil bird remains ever recovered from Southeast Asia – including the first record of vultures in the region, as well as kingfishers, snipes, plovers, parrots, pigeons, swiftlets and marabou storks. The most spectacular bird species at Liang Bua is the Marabou stork (Leptoptilos robustus), which is represented in the lower deposits of the site with Homo floresiensis. On the basis of its leg bones, this bird species is estimated to have been 170/180 cm in height. Previously, fossils of Marabou stork were only found in Central Java from the Early Pleistocene period.

The living species of Marabou stork (Leptoptilos crumeniferus) is a large wading bird in the stork family Ciconiidae. It can reach a height of 152 cm and a weight of 9 kg (20 lb), and has a wing-stretch of 3 to 4 metres, which is the largest wing-spread of any living bird. It is a scavenger bird, and the featherless head and neck are thought to be an adaptation to procure food alongside other scavenger birds (such as vultures). 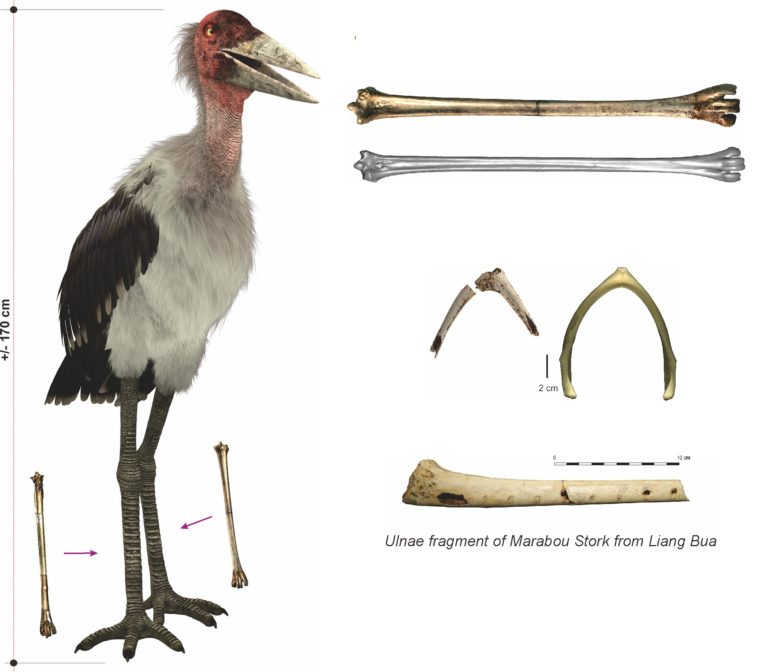 © National Research Centre for Archaeology (ARKENAS) and University of Wollongong