ICC case law addressing charges of recruitment, conscription and use of children in armed conlicts, rape and sexual violence against girls and boys. 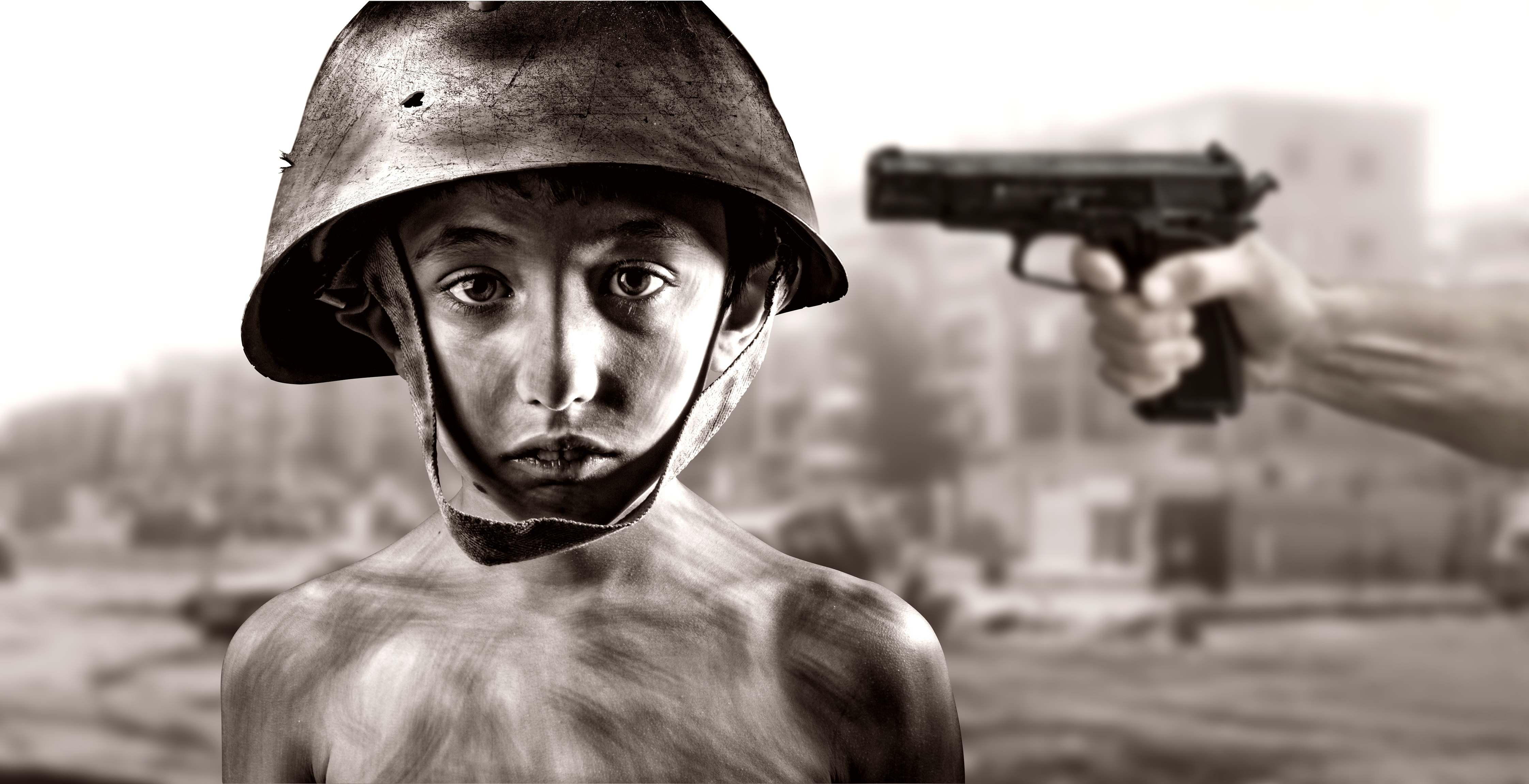 The phenomenon of ‘child soldiers’ has worried many human rights bodies, institutions, and courts.

One of the key issues that brought children’s rights to the attention of the international community is the specific violence suffered by children when they are used to take direct part in a conflict.

At the international level, the first court ruling on this matter was the Special Court for Sierra Leone in 2007. The case concerned the former leaders of the Armed Forces Revolutionary Council (AFRC)—Alex Tamba Brima, Ibrahim Bazzy Kamara, and Santigie Borbor Kanu. From 1997 to 1999, the AFRC allied itself with the Revolutionary United Front (RUF) to quell the pro-government militia, the Civil Defense Forces.

While in power, the AFRC/RUF Coalition undertook the actions necessary to gain and exercise political power and control over Sierra Leone. In particular, the two groups worked together to seize the country’s diamond mining areas. Diamonds were to be provided as compensation for those who gave outside assistance during the conflict. Extreme brutality characterised their violent campaign.

Children were abducted, drugged, and recruited as soldiers. In addition, many gender-based crimes were perpetrated against women and girls, including forced marriage, sexual enslavement, and rape. Among the numerous counts, the three accused were charged with and convicted for conscripting or enlisting children under the age of 15 years into armed forces or groups, or using them to actively participate in hostilities. In 2008, the appeals were dismissed and the convictions and sentences (imprisonment of 45 years for Brima and Kamara and 50 years for Kanu) were confirmed.

Another remarkable case held before the Special Court of Sierra Leone was that involving Charles Taylor, who, at the time of his indictment, was the Head of the State of Liberia. Taylor is said to have financed and supported all the actions of the RUF and the AFRC alliance with material and personnel, weapons, ammunition, and military training. With the aim of destabilizing the country and gaining access to the natural resources of Sierra Leone (mainly diamonds), he allegedly supported the RUF during the preparation of these military actions in Sierra Leone and even during the ensuing conflict.

Trial Chamber II of the SCSL found Charles Taylor guilty inter alia of the war crime of recruiting and using child soldiers. Although the acts were admittedly committed by an armed group that was not under his direct command and control, he had nevertheless supported the relevant group in numerous ways.

Justice Through the Special Court
This was the first time a former head of state had been found guilty of such acts. Under pressure exerted by the international community, he relinquished power and resigned as President of Liberia on 11 August 2003. In 2013, the judgement was confirmed by the Appeals Chamber, finally establishing the criminal responsibility of a former head of state for the part he took in planning and supporting crimes committed by armed groups active during the armed conflict in Sierra Leone. The case proved that an international court had the capacity to bring to justice people responsible of serious crimes including political leaders who had supported the commission of these crimes.

The Rome Statute for the Protection of Children
The ICC has followed this trend and has thus far devoted considerable energy to investigating crimes committed during armed conflicts against children. The Rome Statute is the first international criminal law instrument to criminalise the recruitment or use of children in international or non-international armed conflicts, recognising the fact that children are present, both in armed forces of some States and in non-State armed groups. It has laid bare the fact that children truly are among the most vulnerable groups in conflict.

The ICC’s first case was made against Thomas Lubanga Dyilo (whom we have already talked about) and it included three counts of war crimes for enlisting, conscripting, and using children under the age of 15 to actively participate in hostilities in the Democratic Republic of the Congo. During the conflict, children suffered many forms of violence: deprivation of sleep, forced consumption of drugs, being raped, witnessing rape, being forced to rape, and sexual slavery. Sexual violence was used as an effective mechanism for demonstrating control and ownership over child soldiers. They were also taught to use a gun and forced to fight and kill.

Redefining Voluntary and Forced Recruitment for Child Soldiers
This case provided the opportunity for the Special Representative on children in armed conflicts to, in 2008, submit the case to the ICC based on her opinion as expert witness. She underlined some key points:

The ICC Sets the Distinction
In response, the ICC recognized in its judgment that the distinction between voluntary and forced recruitment is artificial and acknowledged the broader interpretation of the definition of child soldiers to include girls and boys who serve in support roles.

In this sense, the judgment set important international jurisprudence on the crime of recruiting child soldiers and set a precedent for future cases and prosecutions in national courts. The Court did not decide on the issue of sexual violence since there were no charges to that effect. On the other side, the guilty verdict highlighted the need to take urgent and concerted action.

The other case charging crimes against children was the trial of Bosco Ntaganda, former Congolese rebel commander. He was convicted for 18 counts (the highest number of counts an individual has been convicted for by the court based in The Hague) including conscripting and enlisting children under the age of 15 years into an armed group and using them to participate actively in hostilities, rape, sexual slavery, etc. In this case, the ICC made a step forward, determining an important precedent in extending the protection of international law to victims who are raped or sexually enslaved by members of their own armed group, including forced recruits.

The sentencing process has just begun, so we don’t know yet what penalty the Court will decide and what kind of reparations it will provide for victims to receive redress for their suffering. However, should the decision be upheld on appeal, it has the potential to set an important precedent as the first final conviction for crimes of conflict-related sexual violence at the ICC.

Case #5: Dominic Ongwen from the LRA

A very critical case standing before the ICC is that against Dominic Ongwen, alleged former brigade commander of the Lord’s Resistance Army (LRA) who began his career as a child soldier. He is accused of war crimes and crimes against humanity, including the conscription and use of children to participate actively in conflict, rape, and sexual slavery, committed in Northern Uganda during the insurgency of the LRA between 2002 and 2005.

The charges outline a cycle of violence and a pattern of brutalisation of civil population, including children, who are believed to have been abducted and forcibly recruited as fighters, porters, and sex slaves to serve the LRA and to contribute to the attacks against their opponents.

Perpetrator or Victim?
The sensitive and controversial aspect of this case is the victim-perpetrator status of the accused. It is the first time that a former child soldier is prosecuted at the ICC and the first time that an accused faces charges for the same crimes perpetrated against him. The defense argued that Ongwen should benefit from the legal protection afforded to child soldiers including the exclusion of his individual criminal responsibility.

However, the Pre-Trial Chamber rejected this argument. In her statement at the opening of the trial in December 2016, the prosecutor affirmed that having suffered victimization cannot be a justification, nor an excuse to victimise others, so his experience as a child soldier cannot exempt the Court to play its role in deciding whether the accused is guilty of the serious crimes committed as an adult.

The complexity of the Ongwen case challenges the logic of international criminal law based on the definition of excluding status of guilt or innocence, victim or perpetrator. Some might wonder if justice can be served through international law against whom that very same law had failed to protect. Some others propose a lenient approach recognising the extreme violence experienced by former child soldiers and terrible consequences in their mental and social development as a mitigating factor in sentencing.

We hope that these summaries have sparked your interest and encouraged you to find out more. For a more in-depth underrstanding, you may visit the ICC website to access the original court documents pertaining to these cases.