We look at bridging the gap between innovative interventions in research and successful delivery of treatments using implementation frameworks.

Implementing innovative approaches in practice can be complex. Research in the area of implementation is growing and there are now various frameworks developed to drive change and effective implementation of innovations in clinical practice.

There are various addiction treatment interventions that have been well tested in a research setting, however, the transfer of knowledge between research setting and the real world of clinical practice can be complex and if not implemented systematically, this can negatively impact the outcome of the treatment intervention. In this article, we will look at implementation frameworks that are relevant to implementation change in an addiction setting (Moullin et al., 2015).

Fynn and colleagues conducted a scoping review in 2020 on evaluation frameworks and their applicability to real-world programme delivery (Fynn, Hardeman, Milton, & Jones, 2020). They found that evaluation frameworks for implementation help researchers and health professionals to focus their efforts on aspects that are most needed by facilitating a systematic approach to evaluating an implementation process. Having a framework from the start ensures that all stakeholders have a shared understanding of the programme and the evaluation process, which provides clarity on the goals and objectives (Fynn et al., 2020).

Each stage is essential to the implementation process and cannot be skipped. However, those implementing the innovation may need to revisit earlier stages to address challenges and ensure continued support and capacity. Implementers must also be mindful of adopting realistic timeframes. The literature indicates that completing the four stages of implementation typically takes two to four years. The four stages, as summarised by Fixsen et al (2005) are illustrated and described in Figure 1 below. 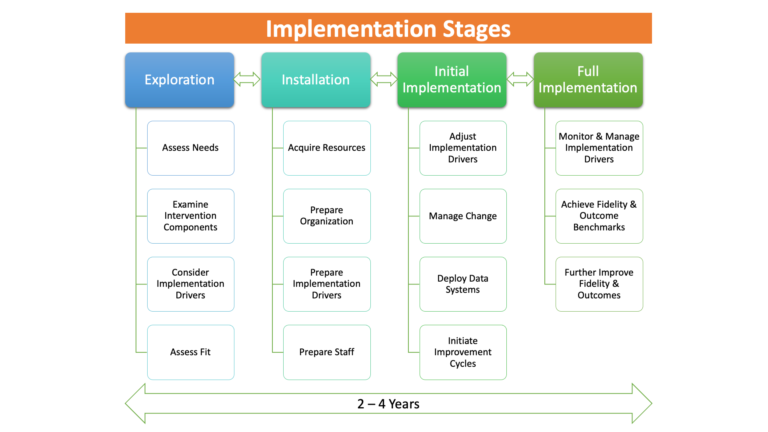 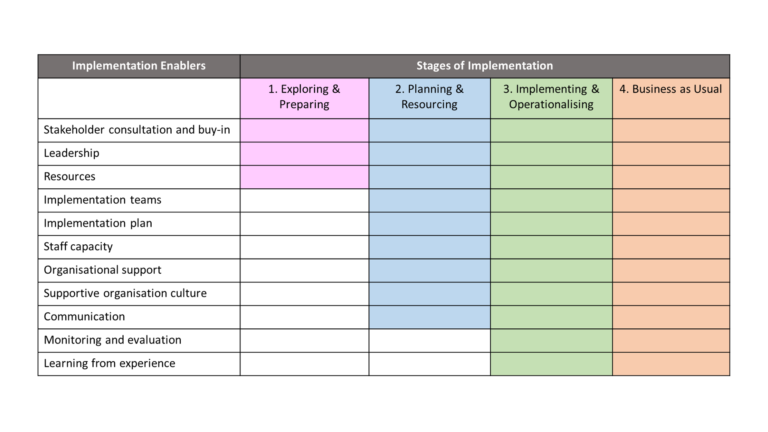 According to Burke and colleagues’ barriers to implementation are grouped under three headings, namely, the external environment, vested interests, and resistance to change (Burke, Morris, & McGarrigle, 2012).

In the context of addiction treatment services, implementation enablers may include support from teams and management, good leadership, and organisational support. From a client’s perspective, examples of enablers for completing treatment can include feeling safe in the clinic environment, nurses who use a trauma informed care approach, and support from family members. Examples of barriers to successful implementation in an addiction setting can include insufficient resources, or lack of infrastructure support. From a client’s perspective, barriers could be difficulty maintaining engagement on the treatment programme or lack of family support (Lee at al., 2012).

We can see from figure 1 that stage 3 still examines the implementation drivers or enablers but also involves managing change, deploying data systems and initiating improvement cycles. Improvement cycles are well documented in the area of change management within health services. In this article we present the World Health Organisation diagram of the PDSA cycle and how it’s used in the context of implementing change in addiction services. 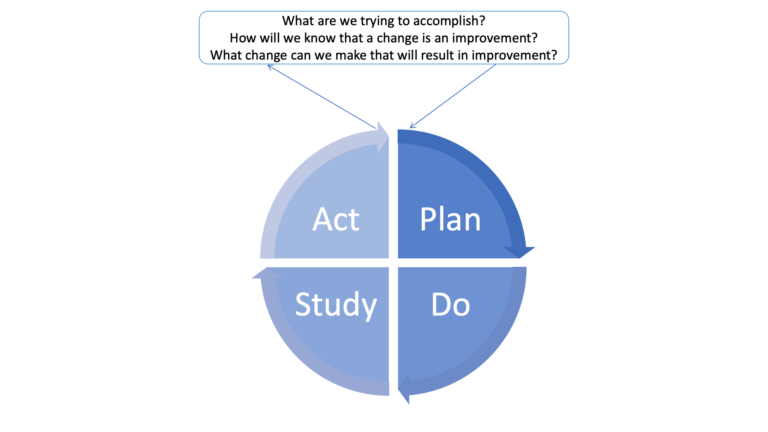 The PDSA cycle is considered a rapid-cycle change process. An example of the PDSA cycle used in an addiction service was provided by Hoffman and colleagues in 2012, where they applied the PDSA cycle with a goal of reducing days to admissions and enhancing retention in care (Hoffman et al., 2012). In this study, they conducted a “walk-through” which is a practice where a staff member takes the role of a client and walks-through all aspects of the service including the first contact, intake and assessment process, and the first treatment visit. The staff members record their impressions, observations, and note any improvements. The walk-through experience is then shared with the change team who engages in PDSA to improve their system (Hoffman et al., 2012).

Figure 4 presents the Real-Time Interactive Operational Research diagram which illustrates how the PDSA cycle may be repeated if necessary, until there is evidence of an improvement in practice. 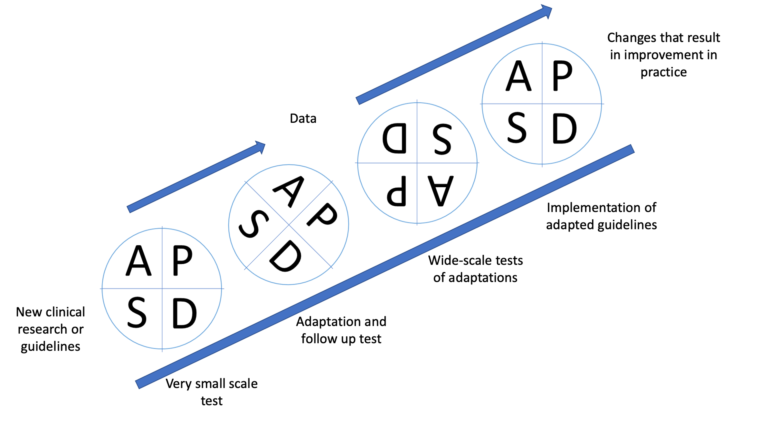 As we can see in the diagram, PDSA is conducted multiple times at various stages of the implementation phase. By doing so, it allows us to adapt and monitor change in the service until there is enough evidence to suggest that the service has improved.

To conclude, while there are many evidence-based treatment approaches from a research setting, often transferring that knowledge into the real world of clinical practice can be complex and if not done systematically, it can lead to ineffective treatment programmes that can be costly. In this article we looked at bridging the gap between innovative interventions in research and successful delivery of treatments in clinical practice by using implementation science frameworks. These frameworks allow us to systematically measure and monitor change in practice and implement innovative practices effectively. We also looked at the PDSA cycle improvement cycles in practice and how it can be used throughout the implementation stages to ensure improvement in addiction treatment services.