In this step, we'll explore a famous example of a controversial sculpture. Dr Maddie Boden lays out the case for and against Titled Arc. 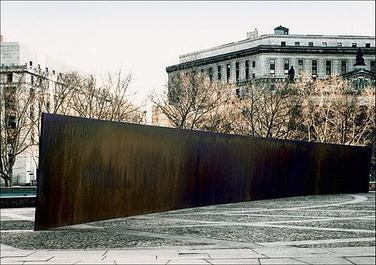 While common criticisms lodged at modern and contemporary art questions the skill of the artist or the beauty of the work, sometimes disputes about art become so serious that the law gets involved. Debating the appropriateness or usefulness of art in a court of law can be fraught with ethical and social issues.

One of the postgraduate courses we offer deals directly with the complex world of art law. However, we’re going to look at just one example of a sculpture caught up in a publicly divisive court case. Once we’ve learned more, we’d like to know your opinion in the case of Richard Serra’s Tilted Arc.

“Richard Serra’s Tilted Arc was a massive public sculpture installed outside government buildings in Federal Plaza, New York, in 1981. It was, in effect, a wall of steel – 12 feet high and 120 feet long – that traced a subtle arc over its length and leaned slightly to one side.

Serra, an artist who had been working on site-specific sculpture since the 1960s, was honoured by the commission awarded by a panel of experts and spent two years planning it, believing the work would be a permanent addition to this busy area of the city. Unfortunately, nothing was done to prepare people for the arrival of the steel sculpture and the reaction of office workers to the piece was negative: it was immediately seen as ugly, oppressive and a ‘graffiti catcher’. Two petitions seeking the removal of the piece quickly gathered 1,300 signatures.

The body that commissioned the work, the General Services Administration (GSA), stood firm, arguing that the 1,300 signatures on the petition represented a minority given that there were 10,000 employees in the building. However, the direction of the GSA changed dramatically in 1984 with the arrival of a new Republican-appointed regional administrator, William Diamond.

Diamond arranged for a three-day public hearing about the possibility of relocating the work, and appointed himself head of a panel of adjudicators. At the public hearing 180 people spoke, including Serra, who pointed out that the work was site-specific and would not function as an artwork if moved elsewhere. He also flatly denied that the interfered with social use of the plaza. In all, 122 people, including many eminent figures from the art world, spoke in favour of retaining the piece, while only fifty-eight, mainly those working in the nearby offices, testified against it. Despite these figures, the panel voted to relocate Tilted Arc. Serra sued, but the courts ruled that the GSA owned the piece and could do what it wished with it.

The sculpture was finally removed on 15 March 1989. Cut into three parts, Tilted Arc – or, rather, what remains of it – is stored in a warehouse. The artist regards the work as destroyed because removed from its intended site. He also noted that, in disregarding his argument and considering the work as movable, the GSA had made the work ‘exactly what it was intended not to be: a mobile, marketable product’.

After Tilted Arc had been removed, Diamond proudly declared that a ‘new art form – open space’ would be exhibited in the plaza. A few benches and planters with trees were installed. Some years later when the plaza needed structural repair and renovation, a landscape architect was commissioned to enliven the space and installed a curling maze of bright green seating that offered workers the opportunity to meet and eat their lunches in the open air. The social function of the plaza had been foregrounded but the important point made by Serra during the 1985 hearing that art itself was a social function had been lost.”

The Tilted Arc, decision prompts several ethical questions about sculpture in public spaces: the role of government funding, an artist’s rights to his or her work, the role of the public in determining the value of a work of art, and whether public art should be judged by its popularity. At the time, Serra commented:

“I don’t think it is the function of art to be pleasing. Art is not democratic. It is not for the people.”

So, what do you think of Diamond’s ruling? Should Tilted Arc have been removed or kept in place? Why? What role should ‘the public’ play in commissioning or shaping public art?