In this Step, we’ll trace the footsteps of Isamu Noguchi after he came to Japan, to around the time he designed the Noguchi Room. First, let’s get an overview of the context surrounding the design of the Noguchi Room—the traditional Japanese buildings he saw on his travels, and the places which served as the foundation for creating the work. He did not simply come to Japan and create a spatial design. His work emerged from his passionate interactions with the art and people of Japan.

Noguchi came to Japan for the third time in the 1950s. With the sponsorship of the Bollingen Foundation, he traveled for research around Europe, Egypt, India, and Indonesia, finally arriving in Japan. His first trip to Japan after the war was 19 years after his previous visit, and his father Yonejiro had already passed away.

He traveled to Kansai with the painter Saburo Hasegawa—visiting Kyoto, Nara, and other destinations, and seeing a lot of Japanese culture and art. Particularly important as influences on the Noguchi Room were the Katsura Imperial Villa and Shisen-do. Noguchi visited these landmarks in Kyoto after being asked by Taniguchi to design a conversation lounge. He skillfully used the spatial design of Japanese architecture, as seen in these traditional buildings, in the design of the Noguchi Room, and we’ll look at that in more detail in subsequent Steps. 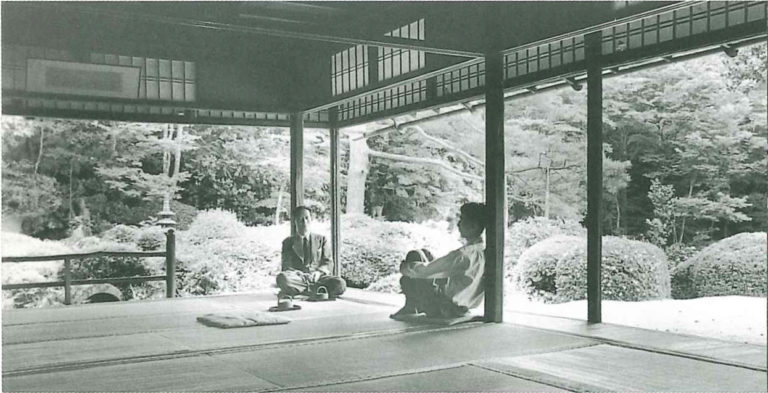 Photograph taken by Noguchi during his visit to Shisen-do. He traveled to Kansai with the painter Saburo Hasegawa. There, he came into contact with, and was stimulated by, Japanese traditional architecture. (Banraisha: A Concerto of Yoshiro Taniguchi and Isamu Noguchi (in Japanese), edited by Makiko Sugiyama, 2006, Kajima Institute Publishing, p. 52)

Noguchi was already a celebrated artist when he arrived in Japan, and he was welcomed with warmth and enthusiasm by Japanese artists. Noguchi visited an exhibition of the Shinseisaku-ha (“New Creation School”) at a museum in Ueno, and there he may have met Taniguchi and others for the first time. Apparently, Noguchi thought he would be seen as an American, and was surprised by their hospitality. They asked Noguchi to do a show using photos of his works, but Noguchi thought there should be actual sculptures if they were going to hold an exhibition, and he began to produce new works.

At this time, Noguchi was already working—at the request of Yoshiro Taniguchi—on the spatial design for a conversation space in the Banraisha (an interaction space for faculty and graduates (jukuin) on the campus of Keio University). Noguchi used the show to exhibit models of works that would figure in his collaboration with Taniguchi. This sculpture is Mu, a crucial work that would later play a role in the spatial art created in the Noguchi Room. 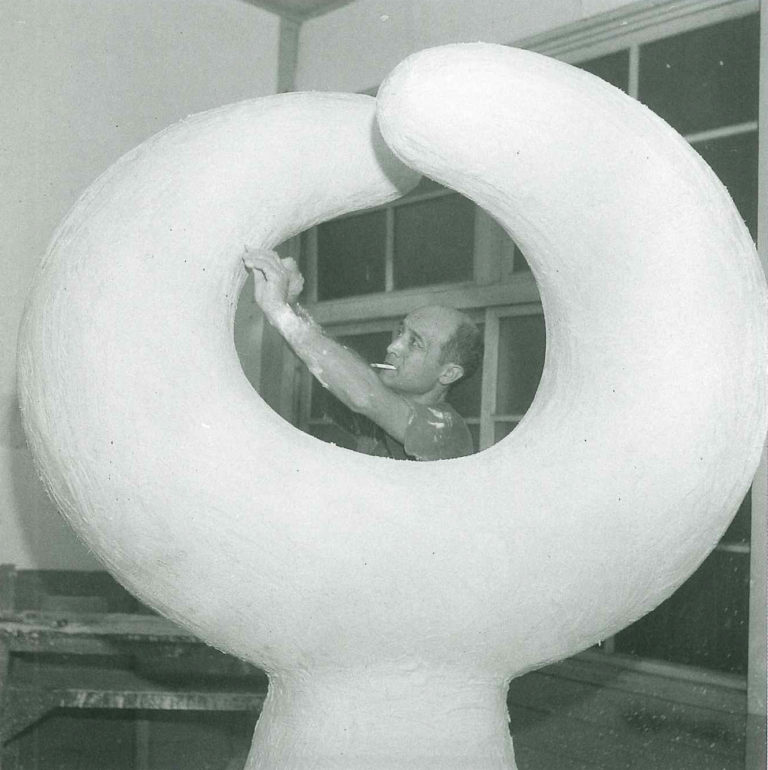 During this period, Noguchi stayed at the house of Genichiro Inokuma, with whom he’d become close friends, and the base for his creative activities was the Kogei Shidosho (National Craftsworks Institute) in Tsudayama, Kawasaki. He produced various works there, not just sculptures, and this is where the stools and tables of the Noguchi Room were produced. Noguchi broadened his activities as far as Seto, and this was the most prolific period during his stay in Japan. His efforts included finishing terra cotta works.

A series of works were exhibited at the Nihombashi Mitsukoshi Main Store in August 1950. For this show, Taniguchi formulated the exhibition plan, and also exhibited panels and models of Banraisha. Here we see how Taniguchi and Noguchi were already collaborating before completion of the Noguchi Room. 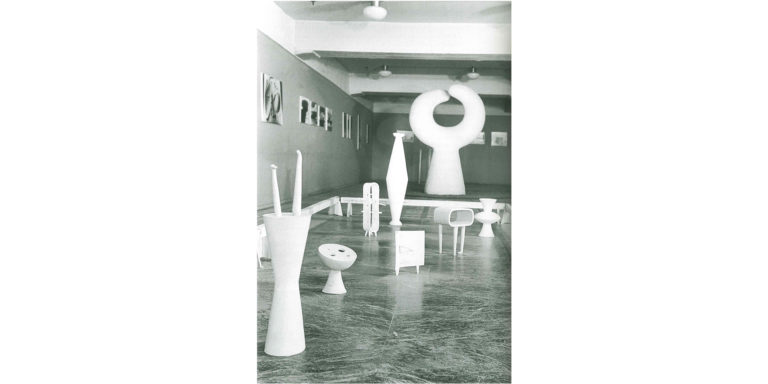 Photo of Noguchi’s one-man show at the Nihombashi Mitsukoshi Main Store in 1950. Mu is visible in the back. (Banraisha: A Concerto of Yoshiro Taniguchi and Isamu Noguchi (in Japanese), edited by Makiko Sugiyama, 2006, Kajima Institute Publishing, p. 54)