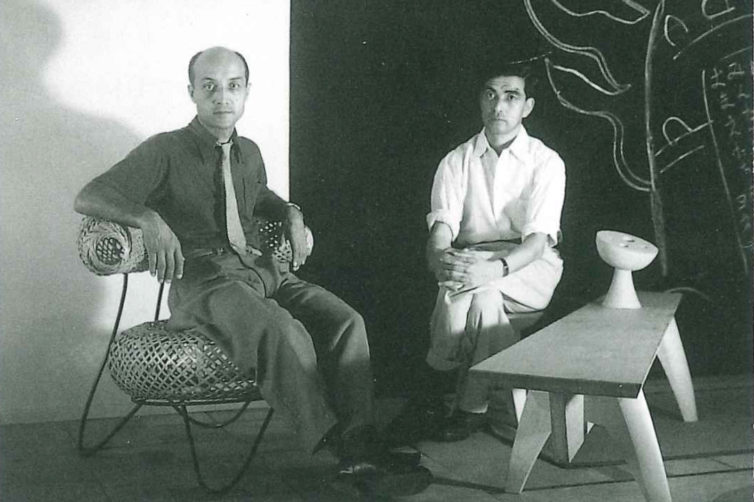 As we saw in the previous Step, the Noguchi Room came into being because Taniguchi proposed a collaboration with Noguchi. In this Step, we’ll focus on the relationship between Keio and Taniguchi, the architect of the Second Faculty Building.

When Noguchi decided to collaborate with Taniguchi in designing a conversation lounge, their shared interest in “composite art” played an important role. In this Step, you should also gain an understanding of that aspect.

Taniguchi was the architect of various buildings at Keio prior to World War II. The Yochisha (elementary school)(1) at Tengen-ji temple was completed in 1937, and the Keio University Hiyoshi Dormitories(2) discussed in more detail in the following Step, were finished in the following year. Both of these buildings have an exceptional design. They were equipped with the latest facilities at the time, and have earned an outstanding reputation from administrators. 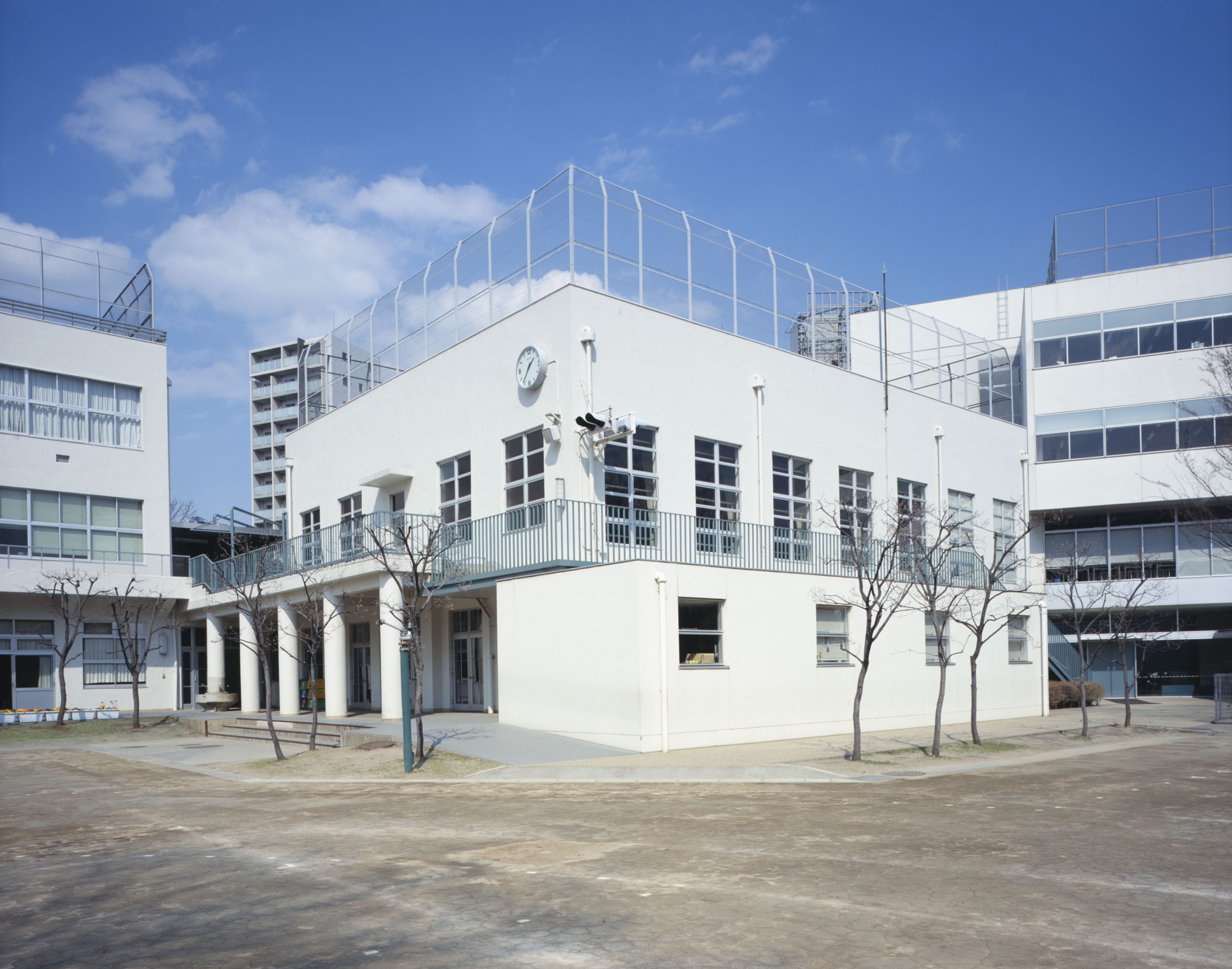 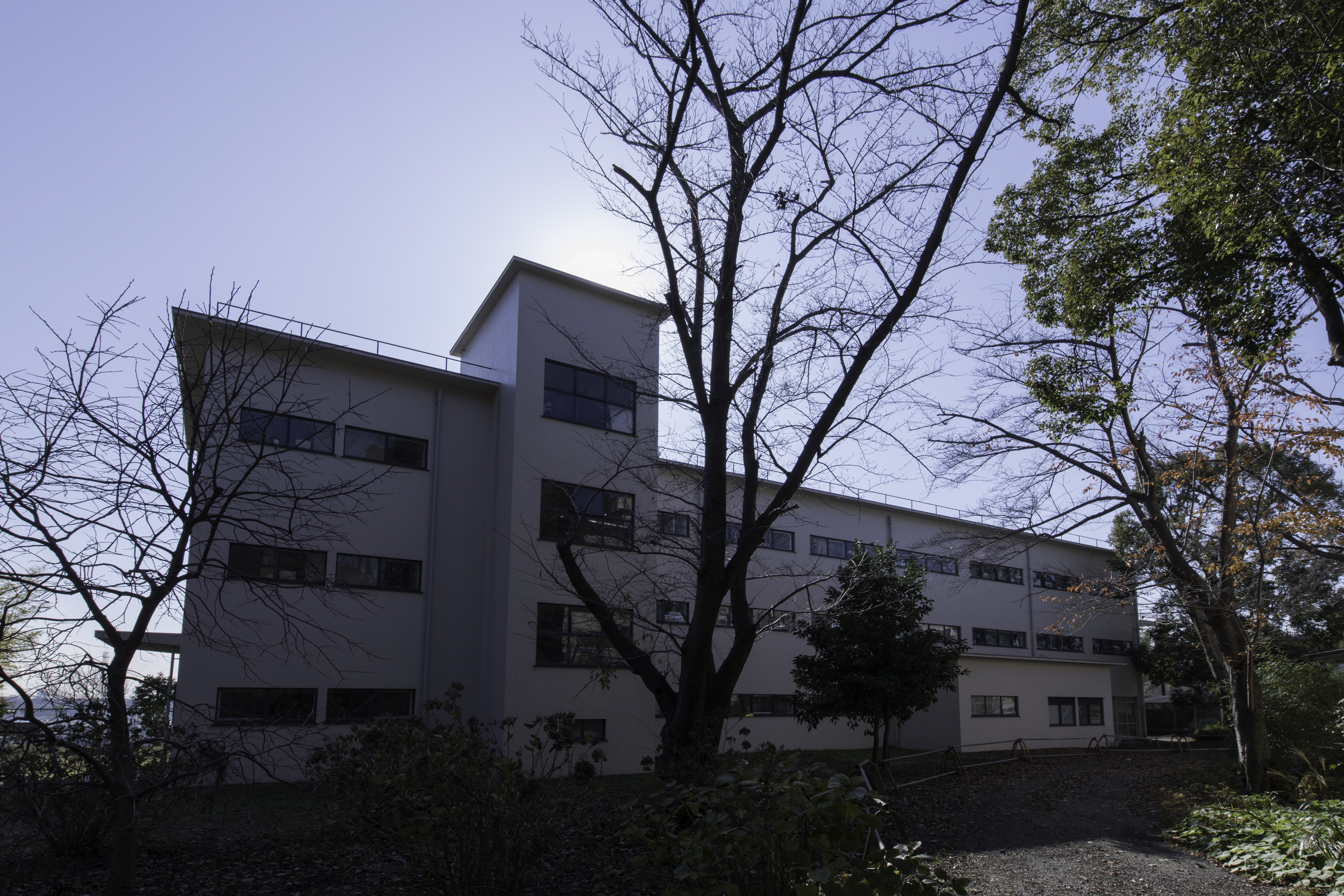 Current appearance of the South Dormitory of the Keio University Hiyoshi Dormitories. The dormitory has been renovated and renewed (photographed in 2019) (©Keio University Art Center, photo: Ryota Atarashi)

Due to high regard for Taniguchi’s pre-war work, he was asked to design many buildings to restore the campuses of Keio University, which were devastated after the Pacific War. In particular, he was entrusted in 1946 with reconstructing the Mita Campus. Here, almost all buildings had been lost, so many new buildings needed to be reconstructed simultaneously. In this way, Taniguchi had a rare opportunity to harmonize the visual appearance of the entire campus. 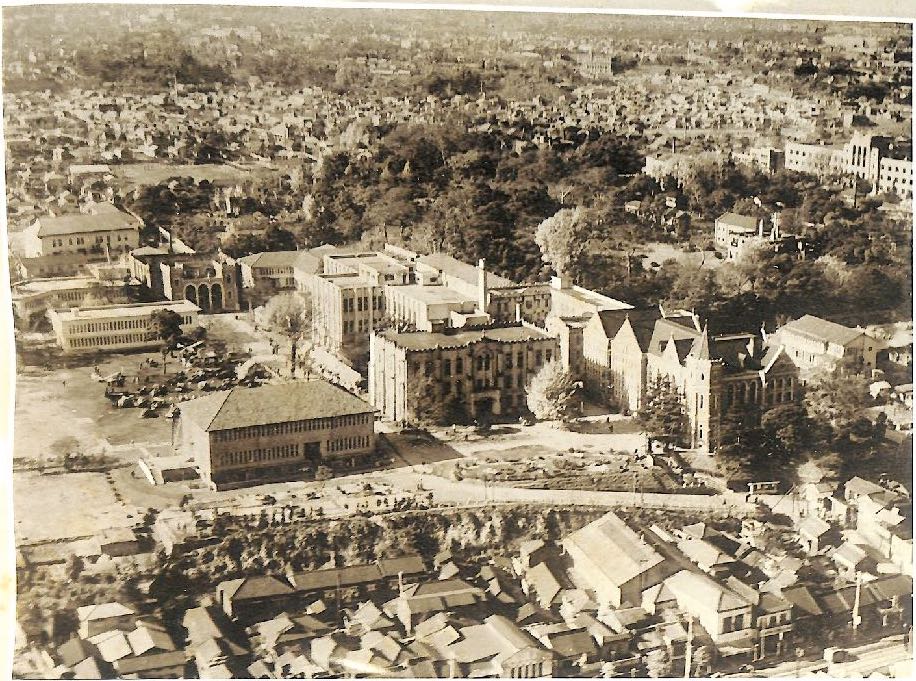 Keio University Mita Campus in the 1950s: The Second Faculty Building is behind the white two-story building facing the courtyard, near the middle of the left side. It has two wings forming an angle. Click to take a closer look

Taniguchi constructed a series of buildings on the Mita hilltop: the Second and Third School Buildings, the Student Hall, the Correspondence Course Department, Second Faculty Building, Third Faculty Building, and the Keio Athletic Headquarters. In building a campus for the next, post-war era of education, Taniguchi looked to the ideals of Yukichi Fukuzawa, who led the earlier “new era” of the Meiji period. He adapted the upper and lower windows of the Enzetsu-kan, the sole remaining structure from the era of Fukuzawa, to the style of modern architecture, and incorporated those windows into each building.

Fukuzawa believed the energy to lead the new era would arise from the interaction of diverse people, and thus the Banraisha, the social meeting place of Keio from the early Meiji period, was the core building. The Second Faculty Building, built on the former site of the Banraisha and later called the “New Banraisha,” was expected to play the same role. Isamu Noguchi was sympathetic to Fukuzawa’s concept, and thus joined in the collaborative design of the Noguchi Room as a place for students and faculty to come together, across the divides of social position, and engage in open discussion. 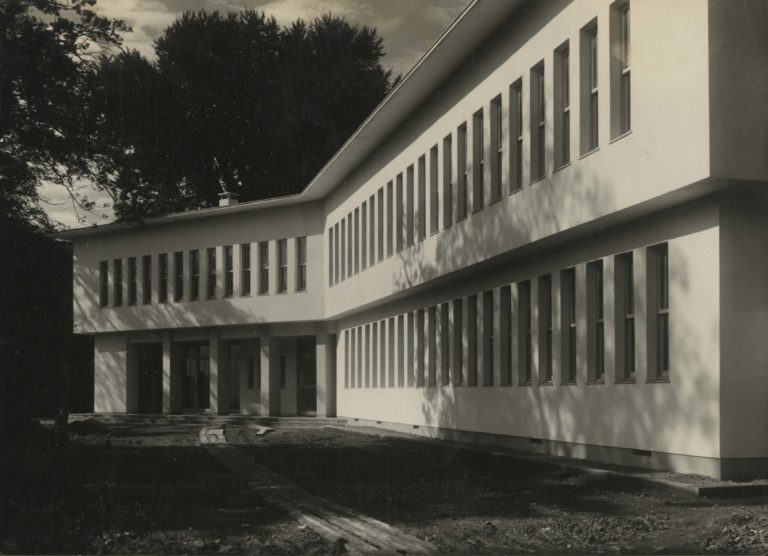 There were other points of resonance between Taniguchi and Noguchi, besides the guiding concept of Keio. One being an architect and the other a sculptor, they had different perspectives, but both envisioned a spatial design with interrelationships between architecture, sculpture, and gardening, i.e., a sort of composite art. When constructing the Third School Building, Taniguchi specifically requested the sculpture Seinenzo by Kazuo Kikuchi for the garden adjacent to the building. Taniguchi said:

“I wanted to build a pleasant post-war university on the burned-out ruins of Mita, through architecture as well as gardening, and, if possible, painting and sculpture. I wanted to show the power of architecture as composite art.”
“I won’t allow a lazy arrangement when integrating architecture and sculpture. Sen No Rikyu warned in the strongest terms about a lazy arrangement of tea utensils. For that reason, I wanted to bring Seinenzo close to the windows of Building No. 4, and tighten the effect of perspective.”
Yoshiro Taniguchi Seishun no Kan (1950)
The Writings of Yoshiro Taniguchi, Vol. 3, Essays on Architecture (in Japanese), Tankosha Publishing, 1981

When considering the collaboration of architecture, sculpture, and gardening achieved in the Noguchi Room, one wonders whether Noguchi sensed destiny in the invitation of Taniguchi, who had ideas similar to his own.

In the next Step, we’ll look at the Noguchi Room in more detail. 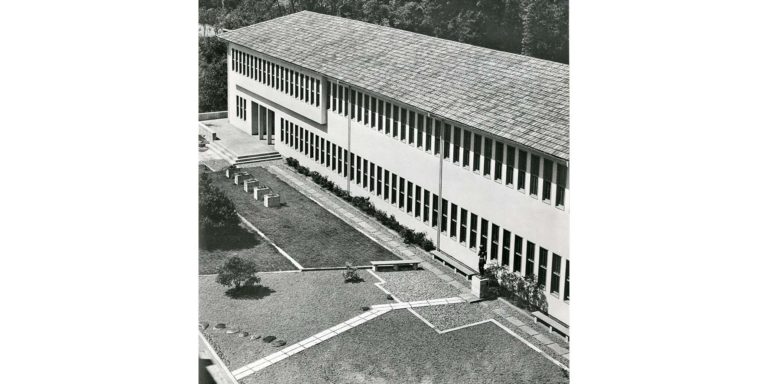 In 1936, Taniguchi did his first design for Keio, the Yochisha school building. In 1937, just after the 60th anniversary of the school’s founding, the Yochisha at Mita was relocated to Tengenji. The building Taniguchi designed was bright and open, and easily allowed circulation of outside air. Also, Taniguchi sought out cutting-edge equipment for the times, and installed panel heating under the floor. The building has been expanded and remodeled, and today still has core functions as the Yochisha Main Building. The design ensures that the school grounds have unity with the Jisonkan (Self-Respect Hall) and other buildings that Taniguchi designed later.

Modern architecture influenced Japan in the 20th-century and spread rapidly. Taniguchi employed its characteristic style in the Keio University Hiyoshi Dormitories. In 1937, three dormitories were constructed on the Hiyoshi Plateau. There were almost no decorative elements, and the contours and surfaces were very simple. State-of-the-art facilities were installed, but due to the Pacific War, the building was requisitioned for use as headquarters of the combined fleet, and the period of actual use as a dormitory was short. Use was resumed after the war, and the buildings survived the demolition crisis. The Southern Dormitory was renovated in 2012.