In this section, you will learn about another binding method, Orihon.
View transcript
3
Next, let us look at accordion books (orihon). The leaves are connected in the same way as for scrolls but instead of rolling up the long strip of connected sheets around a roller you fold it repeatedly on itself like an accordion. You can read it by opening it up page by page or you can open it all. If you want to read it again you can open it at any point in the text you like and when you are finished it is easy to close it. So as a format, it is more practical than the scroll.
52
Also, because you can look at large portions of the text at the same time, it was used for maps or charts; this is a geneaology of the characters in the Tale of Genji. Parent-child relationships are marked by red lines, and the lines are easy to follow by simply opening the book as you go. Orihon was the most common format for genealogies. Another feature of accordion books is that you can turn them over and read the reverse side just as you read the front and some books are double sided. Another advantage is that whereas you have to hold normal book-style books open with your hands, orihon remain in position even if your fingers let go of them.
122
For this reason, they were popular for calligraphy copybooks and this book is one such example. Even today, it remains popular among calligraphy students who need to reproduce the sample writing of their masters and therefore need a book that stays open on the page you need. On first look these books here look like a orihon but the design is different. For example, this is a printed book. It looks like a orihon, but whereas you can open up a orihon and look at many pages at the same time, the back side of the pages are glued together like this, so it does not open more than this.
195
So although it may look like a orihon, the way the leaves are joined together is different. That’s why this type of books is sometimes called orijō (foldable booklet) instead of orihon. There is then another format which is very similar to accordion books but is made with extremely thick paper. You look at it like this and, like any orihon, it can be spread open to look at many pages at the same time. Since it is often used to keep poems written on strips of stiff paper (known as tanzaku), it is sometimes called tanzakuchō (tanzaku binding) and can be considered a subtype of accordion books.
250
Also like accordion books, it is absolutely identical if you turn it over, you see there are tanzaku strips on the rear side too, so it is meant to be used as a double-sided book. Also, I don’t have an example to show you here, but orijō books bound by applying glue on the outer spine on both sides of the book are sometimes called gajō-toji (album binding). And that is all for accordion-style books. 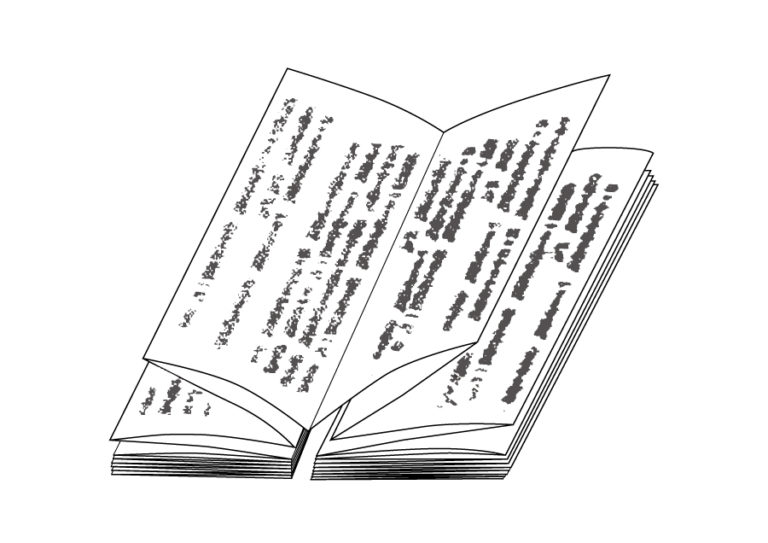 The second main binding method is the orihon (accordion-type binding). The sheets are joined together in the same way as in scrolls but instead of applying a roller at one end, the long horizontal strip is folded repeatedly on itself like an accordion; covers are then applied at both ends. Books in this format look exactly the same from both sides, so it was not uncommon to write or print on both sides. Orihon are easier to read than scrolls and since there was no need to rewind them at the end, they were arguably more practical. Because in China the format was used to print sutras and other Buddhist works, in Japan, too, most books in this format are Buddhist texts (see below).

Secular works in this format are few and the impression is that the orihon was perceived as a format for “private” or “non-circulating” content. As the abundance of creases made it unsuitable for illustrations, it was rarely used for illustrated books, although genealogies and travel guides are numerous enough. (See the sample below)

This is presumably because, like scrolls, it allows to view a larger area than a conventional book (by spreading open several pages). Unlike scrolls, however, accordion-style books stay open even if both hands let go, which is why they are still used today for calligraphy manuals.

One disadvantage is that if for any reason the glue that keeps the sheets together comes off, the pages scatter. Orihon are counted in jyō (booklets).

Before moving on to the next style, it is worth mentioning two other formats which are closely related to orihon. The first is the orijō, which is similar to orihon, but with thicker paper. Two sheets of paper are pasted together to form a thicker sheet. Such thick paper would be impossible to roll up into a scroll. The thick pages of the orijō were perfect to paste paper cartouches (shikishi) inscribed with pictures and waka poems or tanzaku (strips of hard paper inscribed with poems), and this was one of the most common uses of this format. (See the three samples above)

The other format is the gajōsō (album binding). It is similar to the orijō in that thick, two-layer sheets of paper are used, but the difference is that the edge of the front cover sticks out to cover the spine, making it look like a conventional book. The format was introduced in the late Edo period, and was used for collections of pictures and figures. (See above)