How are tornadoes formed?

This Met Office video explains the phases in the formation of a tornado.

While no two tornadoes are the same, there are certain conditions that are required for their formation. A tornado’s development can be described by a sequence of distinct phases.

Sunshine heats the ground which in turn heats the air near ground level. Localised pockets of air become warmer than their surroundings and begin to rise. Cumulus clouds are formed, which grow until they become a storm cloud (cumulonimbus). 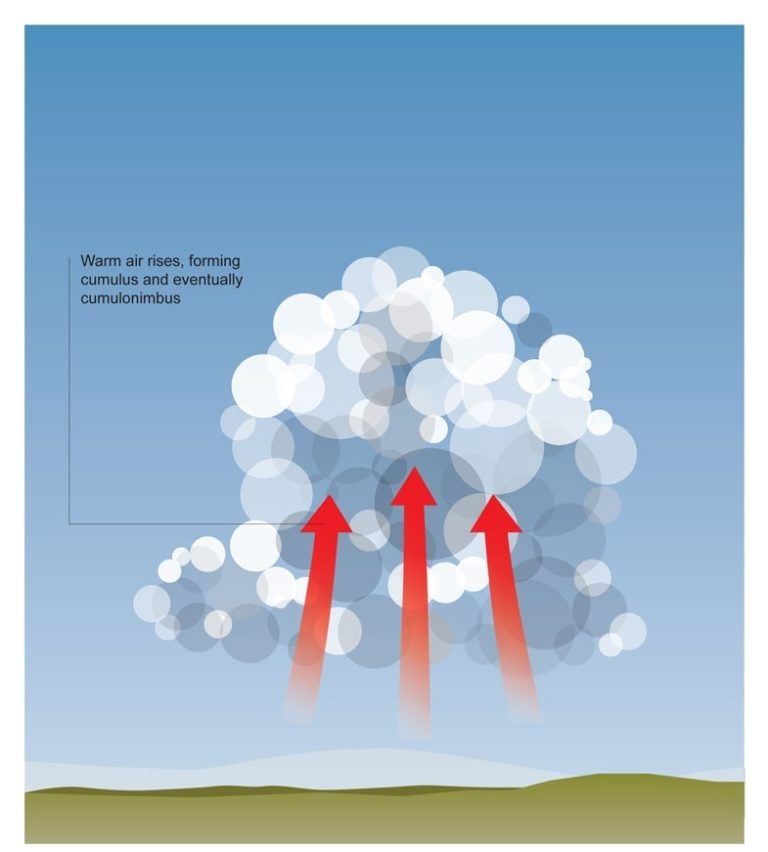 When the above process occurs in an environment where winds increase strongly with height (strong vertical wind shear), the thunderstorm updraught may begin to rotate.

This happens because the strong wind shear creates a horizontal spin in the atmosphere.

The strong updraught tilts this rolling motion into the vertical, so that the spin occurs about a vertical axis, in the same sense as the rotation of a merry-go-round.

Thunderstorms that exhibit persistent and deep rotation are called ‘supercells’. 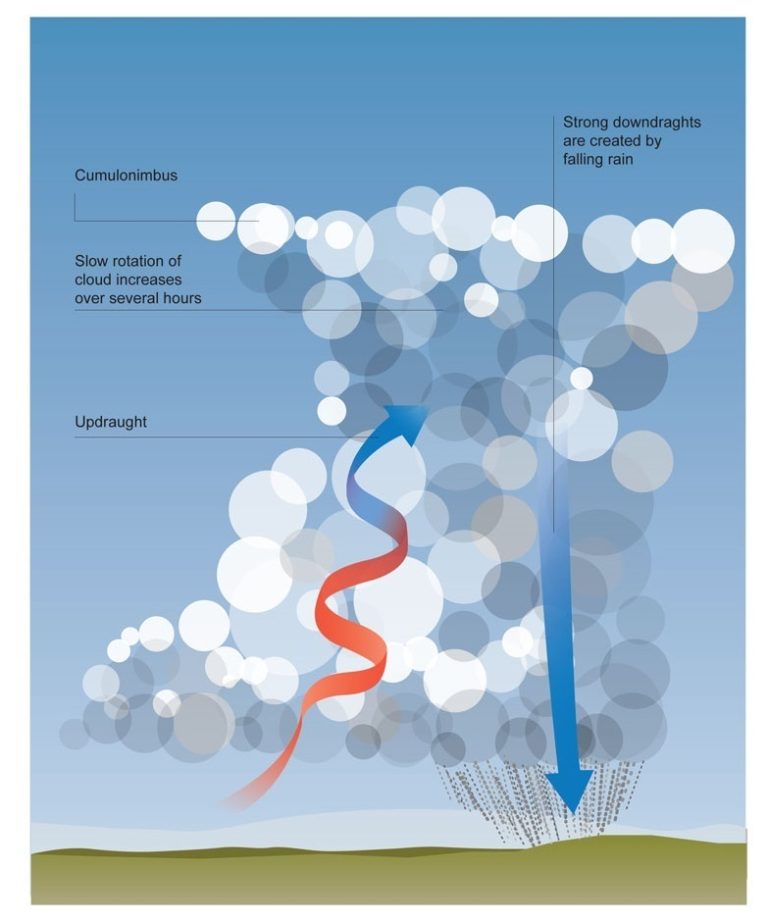 Downdraughts within the supercell storm (descending currents of relatively cold, dense air) help to concentrate the rotation and to bring it down to lower levels.

Eventually the rotation may become so strongly-focused that a narrow column of violently rotating air forms. If this violently-rotating column of air reaches the ground a tornado is born.

The tornado is often visible because of the presence of a condensation funnel – a funnel-shaped cloud which forms due to the much-reduced pressure within the tornado vortex.

Dust and other debris lifted by the intense winds can also help to make the tornado visible. 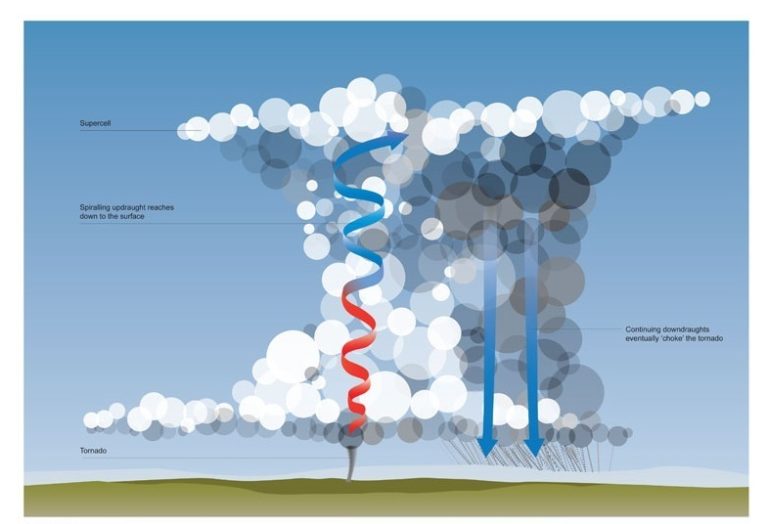 Cold downdraughts eventually wrap around the tornado, cutting off the supply of warm air. The tornado typically narrows during this stage, and eventually the vortex dissipates. 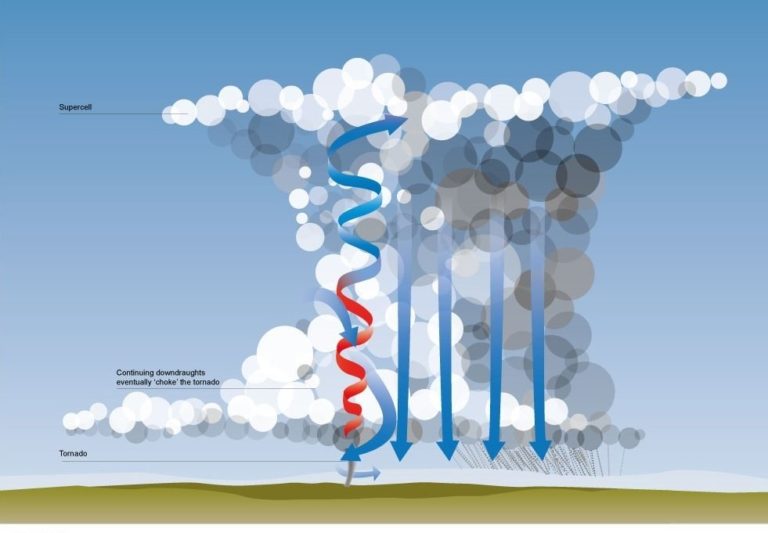 Where do tornadoes happen?

Tornadoes occur in many places around the world, but North America is the continent where they occur most often. The most violent tornadoes are rarely seen anywhere but the USA, Canada and Bangladesh. ‘Tornado Alley’, a region of Central USA, is particularly prone to violent tornado outbreaks and is susceptible to large, long-lived tornadoes. In the spring and summer, warm air from the Gulf of Mexico meets cool air from Canada in this region, and this leads to the formation of powerful storms known as supercells that, if the conditions are right, can spawn tornadoes. 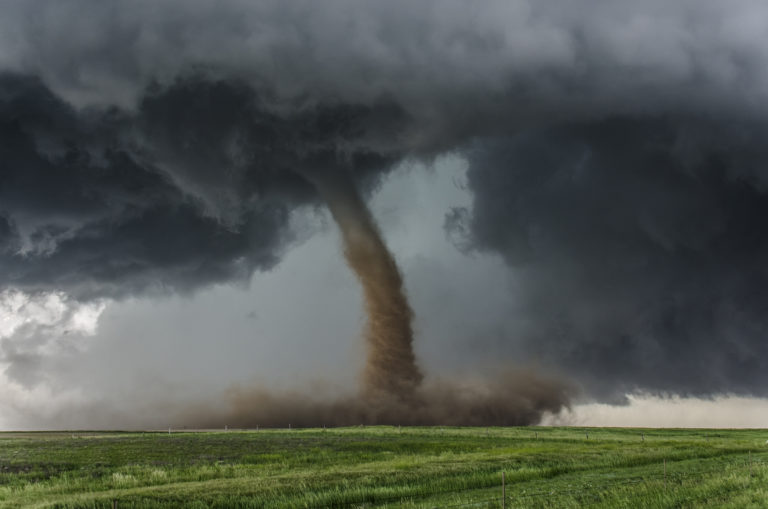 Around 30 tornadoes a year are reported in the UK. These are typically small and short lived, but can cause structural damage if they pass over built-up areas. They form in a different way from those much larger tornadoes in the US. In the UK, tornadoes form when conditions are ‘unstable’ and showery. They are narrow, spinning columns of air that reach the ground from cumulonimbus clouds. As they develop, we often see funnel shaped clouds extending from the base of the cloud and it is only when these funnel clouds touch the ground that we get a tornado. If the funnel cloud touches down at sea we get a waterspout.