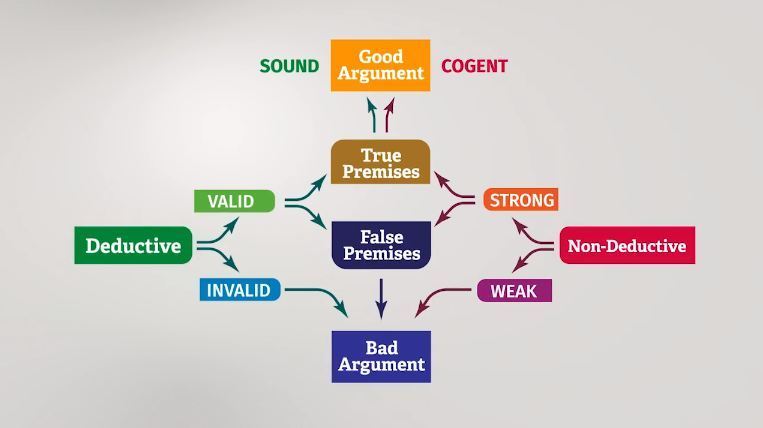 Let’s see how we can use the diagram with some concrete examples. There are two kinds of arguments: deductive and non-deductive. Now, suppose you’re facing a deductive argument. If the argument is invalid, then it’s a bad argument: it’s an argument that is intended to give conclusive support for it’s conclusion, but fails to do so. Game over. Think of a student sitting in a mathematics exam and making a crucial mistake in a proof. Then the student’s answer is invalid and therefore, bad. Of course, a professor might have reasons to think that the student’s answer still deserves marks (maybe even full marks) even though the student’s answer is bad – in our understanding of ‘bad’. If the argument is valid, there are two cases:

View Course
Firstly, the argument has false premises, in which case it is not sound. Game over, the argument is bad. For example:

Secondly, all of the argument’s premises are true. Then the argument is sound, and is, therefore, good.
For example:

I have a very strong feeling that my lottery ticket is the winning ticket, so I’m quite confident I will win a lot of money tonight.

Secondly, all of the argument’s premises are true. Then the argument is cogent, and is, therefore, good.
For example:

As you may have noticed, every argument that has false premises is bad.
Let’s look at some examples of arguments and how we evaluate them.

Deductive, as evidenced by the use of the word `doubtless’.

Is the argument valid?

Is the argument sound?

Now we’re asking if the premises are true. But the first premise is false. It’s not true that if you are a confident driver and have never been in an accident, that driving over the speed limit is not dangerous for you or others.
Speeding is well known to be one of the main causes of accidents, regardless of the skills and confidence of the speeding driver. Indeed, there are other drivers on the road, not all of which are confident drivers that have never been in an accident, and they might react in dangerous ways to the presence of the speeding driver.
Hence, the argument is not sound. Even though the argument is valid, it has a false premise, so it is a bad argument.

We left our parrot in the house this morning. The nearest neighbour lives one kilometre away. When we got home from work, the parrot was gone. It’s most probable that our neighbour stole the parrot.

Non-deductive, as evidenced by the words “it’s most probable”. But also, it doesn’t seem like the argument is giving reasons that would guarantee that the conclusion is true.

Is the argument strong?

Not really. It’s a bit quick to accuse your neighbour of stealing the parrot. Think of other things that could have happened… maybe it flew out the window!
So the argument is weak. Game over. It’s a bad argument.

There are no clear indicator words in this argument to help us in making a choice. If we take the argument to be a deductive one, it would be quite easy to show that it’s invalid. Furthermore, the premises do not seem to be intended to demonstrate beyond doubt that there will be a popular revolutionary uprising in at least one other Arab country in the next few years, but rather to suggest that this is quite likely to happen. We will thus treat the argument as a non-deductive one.

Is the argument strong?

If all the premises happen to be true, given the number of Arab countries there are, we’ll say the argument is reasonably strong. You might not agree with me, but here’s some explanation. If all premises are true, then they provide evidence that there’s some political instability that is spreading in that region of the world, and this makes it quite probable that the spread won’t stop. You may not agree with me, but for the sake of the exercise, accept for now that the argument is (reasonably) strong.

Is the argument cogent?