When we think of bacteria, most of us probably think of the lurking menace of infection and disease. However, not all bacteria are bad. In fact, it could be that one particular bacteria-derived technique holds the key to a new era in molecular biology.

It has long been a goal in biomedical science to be able to edit the genome in order to correct such errors. And now, targeted gene editing is here, enabling the correction of a erroneous copy of a gene in order to restore normal function.

From 2012 to 2015 there was a ten-fold increase in scientific papers discussing a hitherto obscure technique called CRISPR, which stands for Clustered regularly interspaced short palindromic repeats.

This name refers to the unique organisation of short DNA sequences found in the genomes of bacteria and other microorganisms.

These sequences are arranged in partially palindromic patterns and form a crucial component of the immune systems of these simple life forms. Their function is to seek out and destroy any invading viral material.

CRISPR can be used to delete a sequence of DNA, or as in the below diagram, the CRISPR technique can be used to insert a new gene sequence into a host genome (adapted from Charpentier and Doudna, Nature, 2013).

The steps of genome editing with CRISPR 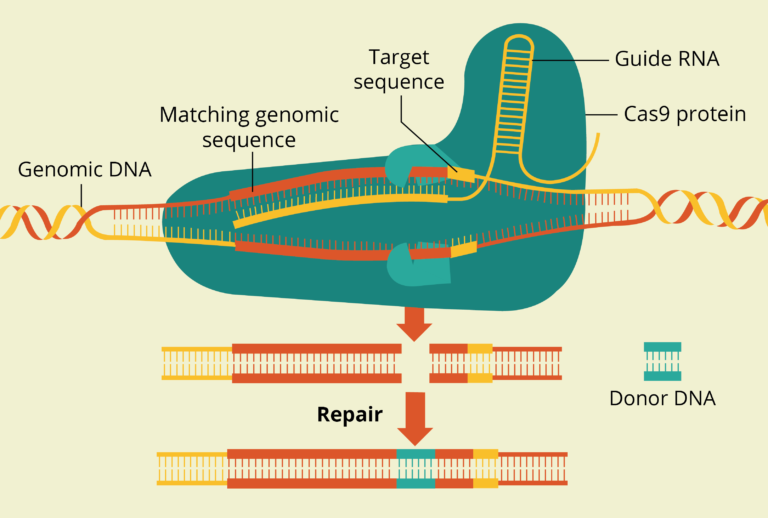 The key to understanding CRISPR is that it works like very precise molecular scissors. These scissors can accurately and reliably cut bits of DNA. This is technically known as the ability to induce directed breaks in the DNA.

Using these scissors to cut out a piece of DNA can be extremely useful. It can allow the cutting-out of a faulty gene; but more importantly, it can allow the introduction of a healthy copy of the same gene.

Because they are so effective at cutting up DNA sequences, they can be re-purposed by a synthetic Guide RNA sequence to interfere with the genome of the host as well.

That means that researchers can change the genomic target simply changing the targeting sequence present in the Guide RNA sequence.

One application of this is in the treatment of genetic diseases. By replacing the faulty sequence gene with the correct form of the gene, a single treatment might be sufficient to treat debilitating heritable diseases.

First demonstrated in 2012, CRISPR has now shown to be a precise, reliable and inexpensive way to edit the genomes of bacteria, plants, mice, rabbits, pigs and monkeys.

In 2016, Dr Kathy Niakan, who works at the UCL-supported Francis Crick Institute in London, became the first person in the world to receive a licence to use CRISPR on donated human embryos.

The future of human genome editing is here.

For your discussion: What do you think of the prospect of human genome editing? How would you strike the balance between the obvious benefits and the less-obvious but potentially fundamental risks associated with it?