This article looks at the different ways in which migration has been represented in city museums in North and South America, Europe and Australia. 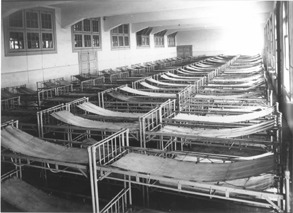 One way in which migration has been incorporated into a city’s heritage industry has been through its representation in museums.

In most cases this interest in migration is a very recent phenomenon. The traditional role of most museums has been to contribute to the creation and maintenance of a national culture and identity. This is especially the case in ‘national’ museums that we find in large cities but it is also the case of local or regional museums that have tended to situate their displays within a broader national frame. In such contexts, migration either has been considered simply irrelevant or has represented de facto a threat to the idea of a culturally and/or ethnically bounded national community. The integration of migration-related themes reflects a broader shift in museum practice over recent decades, which has seen different kinds of museums become more inclusive of other communities and other stories and reach out to new audiences.

The inclusion of migration into museum spaces can be of three basic types.

A notable addition to the international museum circuit has been the opening of new structures that focus on the question of human mobility. One of the oldest migration museums in the world today is the Adelaide Migration Museum in Australia, which opened in 1986. Four years later the National Museum of Immigration was inaugurated on Ellis Island in New York, the entry point to the United States for 12 million transatlantic migrants between 1892 and 1954 (a museum with the same name had previously stood next to the Statue Of Liberty since 1972, but was closed in 1991). It is significant that the first two museums dedicated to migration were opened in Australia and in the United States. These two nations were, in fact, built on migration (albeit to the detriment of indigenous peoples) and regardless of changes in current government migration policy, their national identity is inextricably associated with the multiple flows of people that have arrived on their shores. Indeed, both museums emphasise national/regional rather than local/urban histories of immigration.

Over the last few years, there has been a boom of migrant museums also in cities in Europe and South America, including Buenos Aires; São Paulo; Hamburg; Paris; London; Bremerhaven; and Antwerp.

Some of these museums are located in historically significant buildings in port areas of the city. In Europe such museums tend to focus on emigration. For example, the Red Star Line Museum in Antwerp (Belgium), is housed in converted sheds which belonged to the same shipping company that between 1873 and 1935 transported two million European migrants to North America. The museum portrays the journeys of emigrants, from their origins in different countries to their arrival in the port of Antwerp and subsequent experience aboard ocean liners. The Museo Nacional de la Inmigración in Buenos Aires, on the other hand, focuses on immigration. It is located in the former “Hotel de los Inmigrantes” next to the River Plate which, between 1911 and 1953, offered boarding and orientation to people arriving from Europe. The museum uses photography, film, maps and people’s personal objects to describe the arrival of different migrant groups during the nineteenth and twentieth centuries, and charts their social, economic and cultural legacy upon both Buenos Aires and Argentina.

2. Non-specific museums that include a permanent display on migration

Museums devoted to other topics such as urban history or transport have also started to include migration themes in their displays. One such example is the Galata Maritime Museum in Genoa in Italy. This was opened in 2004 as part of the regeneration of Genoa’s harbour and was initially designed to celebrate the city’s maritime past. Since November 2011 the museum’s third floor has been occupied by an interactive exhibition on emigration (Genoa was the point of departure for millions of Italian emigrants during the late nineteenth and early twentieth centuries), which is accompanied by a smaller section on immigration to Genoa and Italy since the 1970s. This currently represents the only permanent exhibition in Italy dedicated to contemporary immigration. However, its narrative is framed by the museum’s two dominant themes: the sea (the central exhibit in the immigration section is, in fact, a Tunisian fishing boat that crossed the Mediterranean Sea in 2011) and Italian emigration (as a historical event that is eventually replaced by immigration in the 1970s). This means that fundamental issues inevitably get left out, such as the fact that most immigrants in Genoa did not arrive by sea or that immigration and emigration have long coexisted.

Temporary exhibitions on migration have a longer history and continue to be the preferred means by which to build critical discourses about migration, to address more emotive aspects such as personal stories and memories, but also to focus on the more specifically urban dimension. A notable example was the ‘Peopling of London’ exhibition held at the Museum of London in 1993, which challenged the commonplace that before 1945 London was a homogenously white-British city. The exhibition illustrated the overlooked history of London’s medieval Jewish community, the continuous black presence since the sixteenth century, the establishment of Asian communities from the seventeenth century onwards, as well as the immigration of Chinese, Italians and Germans during the nineteenth century.

While the aim of migration museums is to educate the general public and to even promote themselves as tourist attractions, the goal of temporary exhibitions is often to involve and target migrant audiences.

Have you visited a museum or exhibition that addresses migration? Did it consider the specific city in which it was located or was it more nation-focused? To what extent did it enhance your understanding of migration?