Sound waves in the air

What happens if you throw a stone into water? As the stone hits the surface, waves spread from the point of impact. A sound in the air is quite similar. However, the waves are not variations in the water. A sound is variations in air pressure above and below the normal air pressure level. Just like the waves in the water, the sound waves spread out from the source, albeit quite fast; approximately 340 meters (1000 ft) every second. In the image below, the sound wave is displayed with dark areas where the air is more compressed, and light areas where the air is less compressed (the air molecules are more dispersed).

Imagine that you are standing on the blue “x” in the picture above. We can make a graph of the air pressure at your location, such as the example below. Notice that it starts with a steady air pressure (no sound), and then starts to vary once the sound waves hit you.

The variations in air pressure that we perceive as sound are very rapid. We call the speed of these variations the sound frequency. The lowest audible bass frequencies vary 20 times per second (20 Hertz) and the highest audible frequency to a young person without hearing loss is around 20 000 times per second (20 000 Hertz). The amplitude of the sound wave describes how large its pressure variations are. A quick demonstration of frequency and amplitude is shown in this video.

View Course
The most common way of representing sound is the one you will meet in most types of sound recording software: the waveform. The waveform is actually quite similar to the previous figure. A waveform representation shows how the amplitude (y-axis) of a sound varies over time (x-axis). The figure below shows a waveform representation of a very short sound segment. Time is shown along the horizontal axis. Notice how the amplitude varies above and below the 0 line.

The figure above shows a very short (3 millisecond) excerpt of a sound file. If we “zoom out” of the image, these variations become so small that they “merge” into the blue solid areas in the figure below. We are now unable to see the individual fluctuations from the previous figure, but we can identify several “bursts” of sound.

A spectrum representation shows the frequency content of a sound recording. Here the frequency is shown on the horizontal x-axis, and amplitude on the vertical y-axis. The figure below shows a spectrum of a saxophone tone. The peaks in the spectrum are the fundamental frequency and the overtones of the saxophone sound.

If we are interested in analysing how the spectrum varies over time, we may use what is called a spectrogram (or sometimes sonogram)A spectrogram is created by dividing the sound file into many short segments, calculating the spectrum for each segment, and placing these next to each other. The picture below shows the conceptual construction of a spectrogram. Essentially, the spectrum of each segment is tilted sideways and colour-coded. The result of placing these colour-columns next to each other is an image showing the variation in frequency content over time.

The picture below shows a spectrogram of the same saxophone melody as shown in the video on sound analysis in the next step. 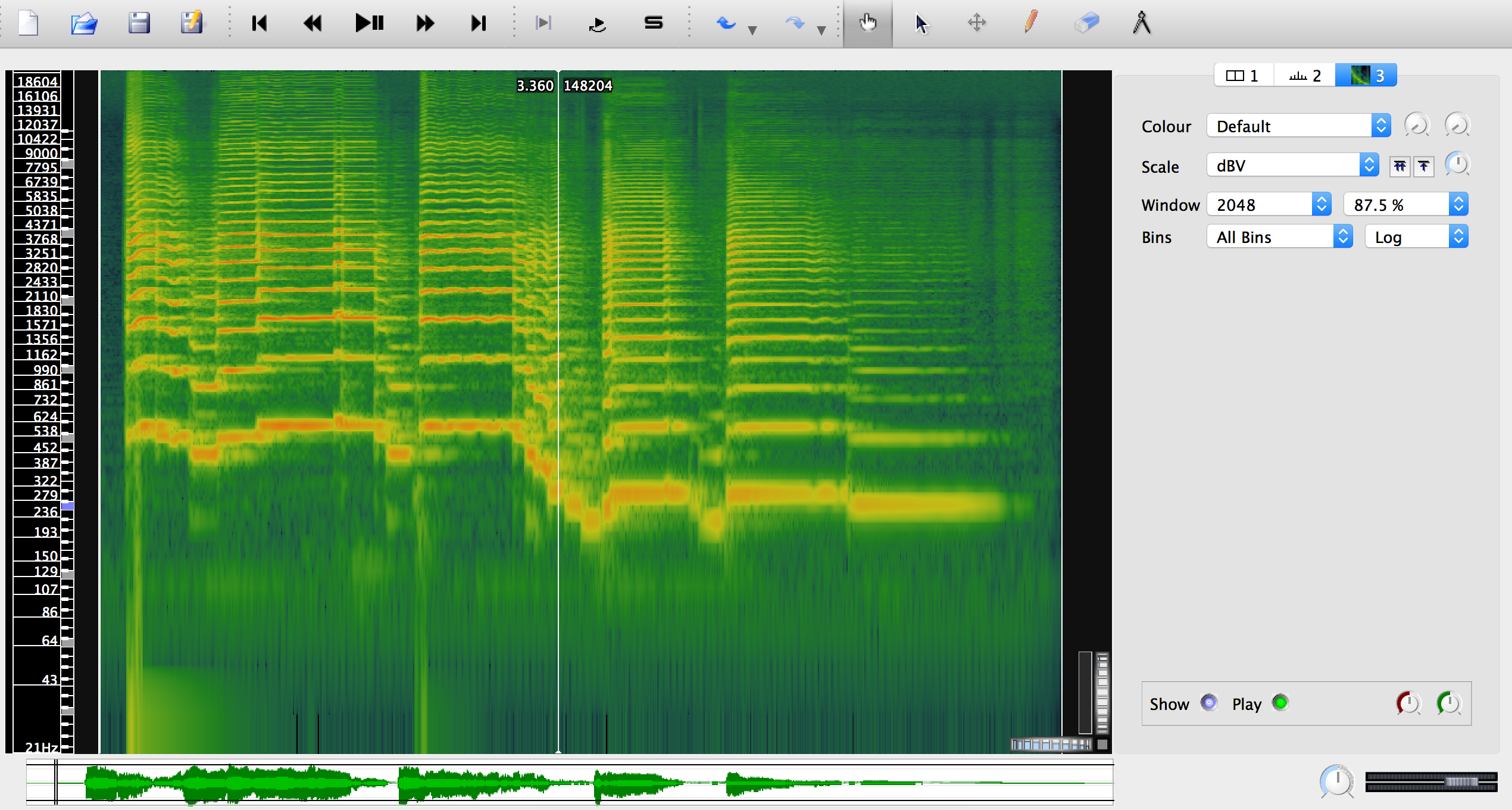 There exists a wide range of software for sound analysis. Here is a selection of free software that you may try yourself:In addition, there exists a range of tools that require a Matlab license. These tools are more advanced, and have a higher threshold to get started:
© University of Oslo

Hi there! We hope you're enjoying our article: Exploring sound analysis
This article is part of our course: Music Moves: Why Does Music Make You Move?