Inflation as Explained by Alan Guth

In the early 1980s, Alan Guth was one of the physicists who realized about inflation. How did he and the other scientists able to think about it?
© Seeds, M. A., & Backman, D. (2016). Foundations of Astronomy, Enhanced. Cengage Learning.

Alan Guth, as mentioned by Prof. Goto in the previous video about inflation, was one of the men behind the realization of inflationary Universe theory. Many other physicists like him discovered that inflation can solve the shortcomings of the Big Bang Theory.

As the Universe underwent inflation, the Universe’s curvature was forced to become zero, just like what an ant sees on the surface of the balloon that it stands on. In addition, 10-36 seconds after the Big Bang, the observable Universe was only around 10-58 light-seconds in diameter (1 light-second is around 3 x 108 meters, so 10-58 light-seconds is about 3 x 10-50 meters, very much smaller than a proton which is in order of around 1 femtometer or 10-15 meters). The very short time scale when inflation happened would still be more than enough time for energy to effectively flow across the region that served as the current observable Universe, thereby causing the equalization of temperature before inflation began. 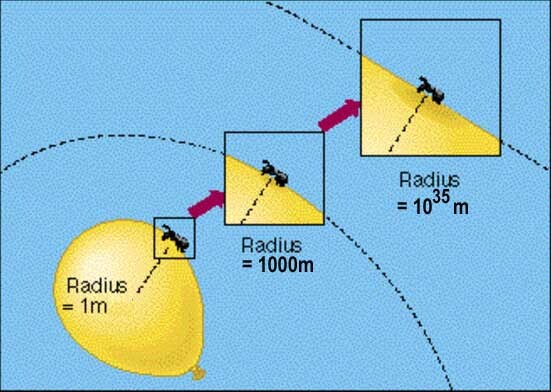 Watch this video of Alan Guth explaining briefly what is inflation.