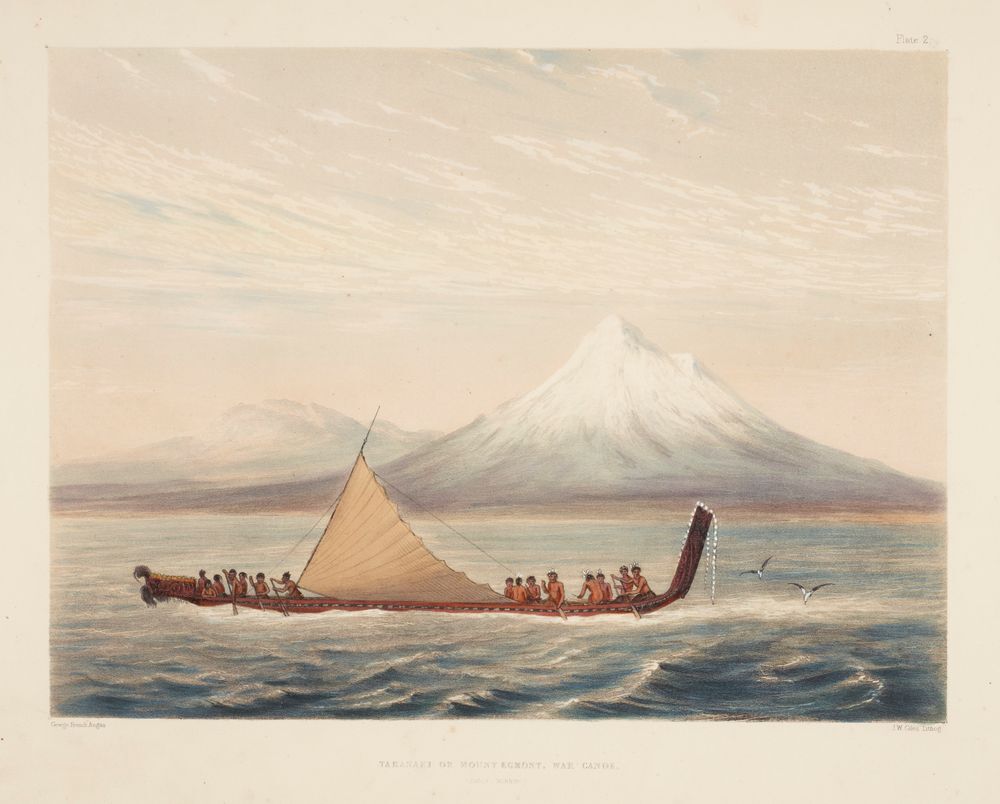 ‘So vast, so fabulously a varied scatter of islands, nations, cultures, mythologies and myths, so dazzling a creature …’
– Albert Wendt, 1976

The land before time

Aotearoa New Zealand was the last significant land mass in the world to be settled by humans. For millions of years since it broke from the ancient supercontinent Gondwanaland, it was the domain of birds, reptiles, insects and plants, undisturbed by mammals of any kind, including humans. That changed around 1280 AD – though there is some debate on the exact period – with the arrival of seafarers from the Pacific Islands, on large, double hulled waka hourua (voyaging canoes).

View Course
The first people to explore the Pacific Ocean did so without any scientific instruments. They navigated using complex systems of knowledge about the stars, winds, and the movement of the ocean. They also knew how certain cloud formations and sea birds indicated that land was near.
These explorers deliberately searched for new land. As part of their strategy, they sailed into the wind. That way, if their search failed, they could return home more quickly and safely, with the wind behind them. Later navigators sailed to known lands by following instructions handed down orally over many generations.
When there were few places left to discover by sailing into the wind, they began to search across and down the prevailing wind, ultimately making their final geographical discovery – the islands of Aotearoa New Zealand. Some iwi Māori (Māori tribes) ascribe this discovery to the legendary Polynesian explorer and navigator, Kupe. 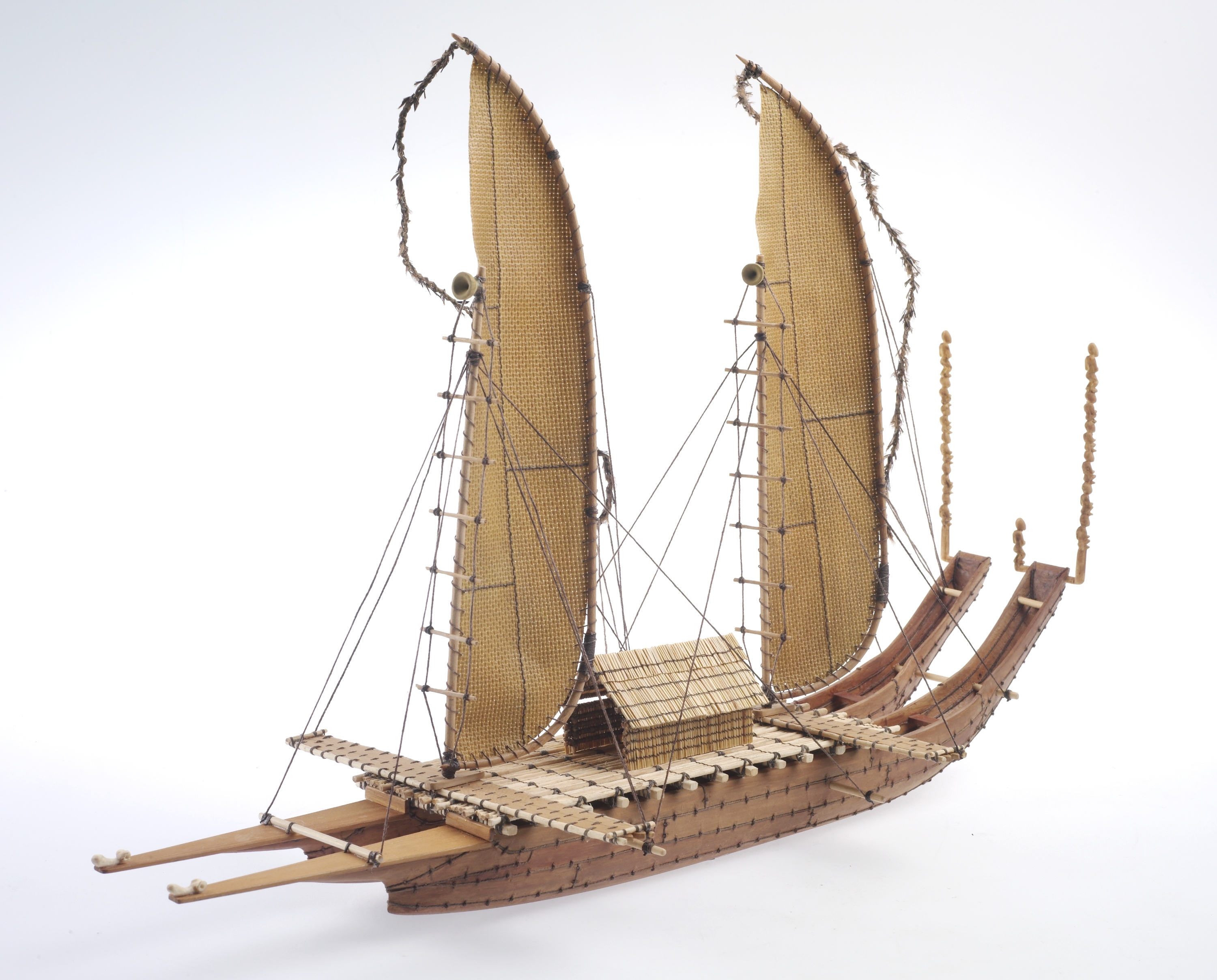 It is possible that many of the great Tahitian voyages to Hawai’i and New Zealand were made in vessels similar to tipaerua. Their low prows and upturned sterns are a design feature typical of many large Māori waka (canoes) to this day.
Model Tipaerua (sailing canoe), 2002, Tahiti, by Alex Kennedy. Commissioned 2002. Te Papa (FE011788) © Te Papa CC BY-NC-ND 4.0.

Navigating to the Islands

For thousands of years, Pacific people have guided their canoes using a deep knowledge of their environment. Here are some examples.

When setting out on a voyage to a known destination, a navigator lines up the canoe with two or more landmarks on the island they’re leaving. As the canoe moves further from the island, the navigator notes how far it drifts from the initial alignment. This reveals which direction the current is running in, and how strong it is. The navigator then sets the course, allowing for that drift.

A star path is a series of stars that either rise or set at the same point on the horizon. The navigator of a canoe uses the point at which they meet the horizon as a bearing to stay on target. Which star path a navigator follows to any given destination depends on the time of year.

Navigators recognise different ocean swell patterns – even though they can’t see them. They feel the motion of the swells underneath them. Swells in the open ocean help navigators to keep on course. Certain distortions in the swells are the first sign that land is near.

During the first part of a journey, navigators aim for the largest land mass possible. Instead of sailing towards one island in a group, they aim for the whole group. Once they reach the group, finding the way to a specific island is easier.

You can see the clouds over an island, even when the island itself is too far away to be visible. Clouds move slowly when they travel over land, then pick up speed after they’ve passed it. Navigators look for this type of cloud movement as they scan the horizon. The colour of a cloud’s underside can also offer clues. A cloud passing over a sunlit lagoon may glow brightly. A cloud with a heavily forested island underneath may have a greenish tinge.
The Māori name for New Zealand, Aotearoa, translates to Long White Cloud, a reference to the appearance of New Zealand when approached by sea, with a shroud of cloud that often cloaks the land with its long mountain ranges.

This saying is attributed to Kuramārōtini, the wife of the legendary Pacific voyager Kupe, on first sighting Aotearoa New Zealand.

Some land-based birds fly out to sea to fish in the morning, and return at dusk. Seeing them at these times tells navigators where land is.

Some oral histories tell of Polynesians following the paths of migratory birds to find out where they went. These would have been experimental voyages.

Forty thousand years ago, people began venturing into Moana-nui-a-Kiwa (the Pacific Ocean). In the last 3000 years, they have voyaged throughout this vast ocean, settling its scattered islands and exploring its mysteries. To explore the Pacific, early voyagers needed canoes that were strong and seaworthy. Today these are called vaka, va‘a, waka, or wa‘a – depending on where in Polynesia you are. The first Europeans who ventured into the Pacific marvelled at the skill with which these canoes were made.

The range of designs and building methods was vast. In double-hulled canoes, the two hulls were joined together by booms and a decking. Outriggers had just one hull and a float attached to it by two or more booms. Some canoes had hulls built from planks, while others had ‘dugout’ hulls made from hollowed-out tree trunks. The earliest Polynesian canoes were ‘tacking canoes’. Like modern yachts, they had a specific bow (front) and stern (back). But later, probably influenced by Micronesian boat builders, some Polynesians made ‘shunting canoes’, where either end could be the bow. 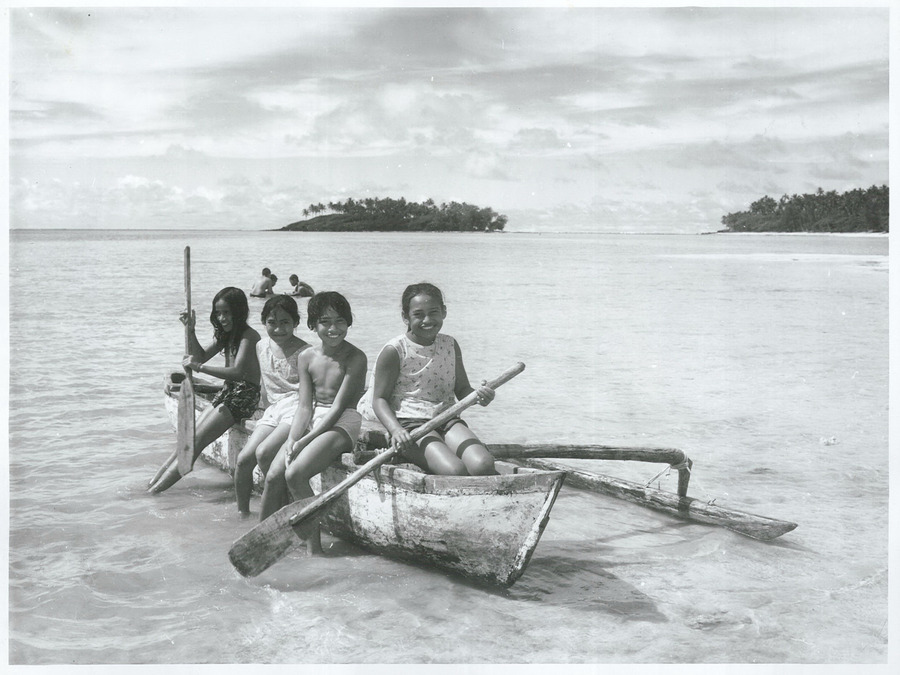