How many forms of Norwegian?

How mnay forms of norwegian are there? 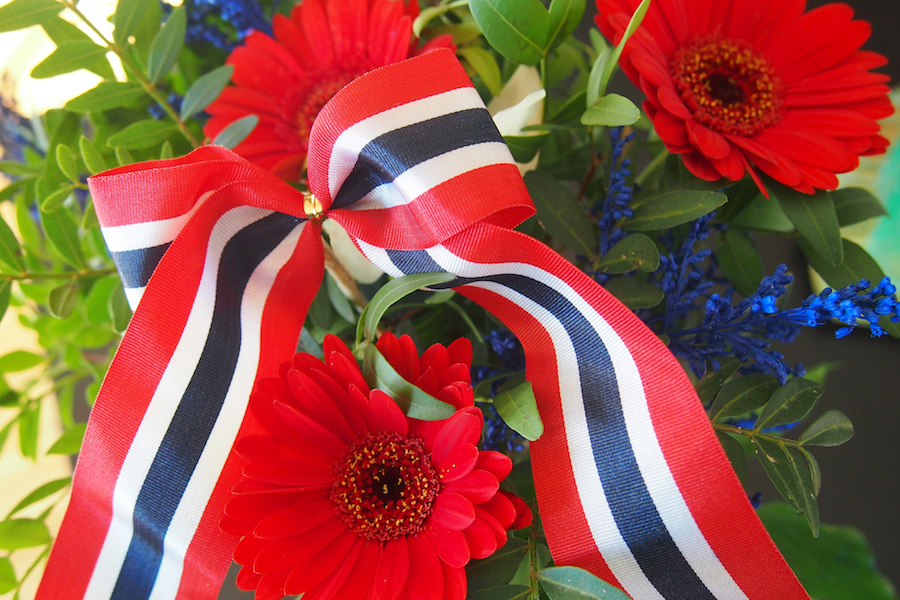 As Norway was re-established as an independent nation, questions related to language were soon raised. Nationalistic and romantic ideas were voiced and support was given to the idea of developing a proper written Norwegian language. One question was which spoken variety should be reflected in the written form. Arguments were based on three different positions.
The first alternative was rejected. The two others were both set into practice.
Ivar Aasen (1813-1896), a linguist and poet with a rural background, developed Landsmål, as it was called, based on extensive research on rural dialects in western and central parts of southern Norway. Landsmål became an official norm in 1885. It later broadened its basis by including forms represented in East Norwegian speech. In 1929 it was labelled Nynorsk or New Norwegian which still is used. During the next 50 years, the language was widely accepted but did never obtain a position as the language for the majority.
Knud Knudsen (1812-1895), a grammarian and headmaster, had the goal of altering Danish orthography until it reflected the informal speech of the educated classes in Norway. Riksmål was established as a norm by a spelling reform in 1907. In 1929 this variant was labelled Bokmål or Book language. During the 20th century, a succession of spelling reforms led to the inclusion of forms related to lower urban class and rural speech in Bokmål.
A selection of words within both Nynorsk and Bokmål were then presented with main and alternative forms. In this way, the user was given the opportunity to choose forms that corresponded more to the speaker’s dialect. The latitude of these options has been narrowed in recent years, but alternative forms still exist.
It became a political goal to fuse Nynorsk and Bokmål into one form, Samnorsk (Common Norwegian). This idea was abandoned in the 1960s, and Nynorsk and Bokmål have since developed as two parallel written forms of Norwegian.
Today Bokmål is dominating in all sectors of the Norwegian society as 85–90 % of the population are writing in Bokmål. The users are living in all parts of the country. To some degree, Bokmål is used as a spoken language. Some dialects are more similar to Bokmål than others. These dialects are found in the south Eastern parts of Norway with Oslo as a centre.
Nynorsk expanded until World War II when it was used by about 1/3 of the population. Later it has declined, and today about 10-15 % of the population are using Nynorsk. Its stronghold today is the central and western parts of southern Norway where the dialectal forms more or less overlap with the written forms.
The difference between Nynorsk and Bokmål is sociolinguistically important.

At present Bokmål «[…] is often associated with urban culture and an urban way of life. It is also in most cases the language of advertising, pop music, fashion, entertainment and young people’s culture. It is the language of weekly magazines and the big newspapers, and also of the commercial world and the world of technology. […]

Nynorsk is often associated with traditional and national values and with regional or local culture. Writing Nynorsk might be a signal that your identity is more related to local values than to urban style, and that your local roots are of great importance to you.» (Maagerø and Simonsen 2005). Nynorsk has a rather weak position in technology, economy and popular culture. On the other hand, these are the areas where Bokmål is most challenged by English.

Today dialects find significant support at all levels of Norwegian society from casual speech to teaching, broadcasting and parliament. Students freely speak their local dialects in school. Even the Education Act states that they have the right to do so. It states that the teacher «should pay due attention to the vernacular used by pupils and that he or she should not attempt to make them abandon their home dialect» (Jahr 2007).

«While the actual pronunciation of Norwegian has played a fundamental role on the development of both norms, the existence of two competing written norms has, on the other hand, prevented the formation of an uncontroversial spoken norm» (Kristoffersen 2000). In other words, there is no standard spoken Norwegian. This is reflected by Maagerø (2005) who quotes the rhetorical question: «Why should the Oslo way of speaking be better than any other dialect?»

If a student of Norwegian as a second language wants to check the pronunciation of a certain word, such information is in general absent in the major dictionaries. They only provide spelling, definitions and grammatical information. The main dictionary of Bokmål, Bokmålsordboka (Wangensteen 2005), which indicate stress patterns, states that the given information only indicates a general Bokmål reading of words, but «[i]t has not been the editorial board’s intention to make users avoid pronunciation which is different from the one given in the dictionary, but an inherent part of their dialect, nor in any way to state that such variants are inferior.» The careful wording of this statement indicates the strong position of Norwegian dialects.
However, this does not preclude the existence of a spoken basis for Bokmål. The central-eastern part of Norway is considered the centre of Norway as this is the location of the capital, Oslo. In general, the formal middle-class urban speech in eastern parts of southern Norway is quite close to Bokmål, and as such, it can be labelled as an unofficial norm of Norwegian. It is used in news readings on the radio and TV, when reading Bokmål aloud and in the teaching of Norwegian as a second language to adults.
The spoken basis for Nynorsk is the rural dialects of western Norway. These dialects by themselves form a heterogeneous picture, and one cannot identify one dialect as the common denominator of Nynorsk. It is not correct to say that people speak Nynorsk even though they write Nynorsk. One may hear spoken Nynorsk in news readings and in stage performances.
As Norwegians are exposed to the different forms of Norwegian from childhood on, they generally face minor problems in understanding different dialects. In school students are not taught how to speak Bokmål and Nynorsk. In reading, dialectal prosody is used and the Bokmål or Nynorsk wording is not necessarily respected. The speech sounds can be an approximation to Central East Norwegian or the reader may use the sounds of his/her dialect.
Adults usually speak the dialect of the place where they grew up, but of course, there are people who have changed the dialect of their childhood to another dialect or to a speech based on Bokmål. Consequently, when a Norwegian is approached by a newly arrived foreigner (who will speak the Bokmål learnt in class), the Norwegian most likely will answer using dialectal forms. As phonology, inflexions etc. may differ radically from the Bokmål form, there is a great chance that the student of Norwegian as a second language will not be able to transfer the word spoken to its corresponding Bokmål form and thus will not understand what is said. This might happen due to different speech sounds, historical processes reflected in the dialect, different stress placement, various fast speech phenomena, different vocabulary etc.

Norwegian as a second language

Adult students in introductory courses of Norwegian as a second language will most likely be taught spoken Bokmål in class, at times even in areas where Nynorsk is used. As most textbooks are written in Bokmål, teachers, irrespective of their dialectal background, adapt their way of speaking to Bokmål. Normally they maintain the prosodic features of their dialect. Thus spoken Bokmål will be found in several forms. Many of them will be different from Central East Norwegian. Students may experience several forms of spoken Bokmål, but since the ability to change from dialect to spoken Bokmål is a skill used by second language teachers, and not by dialect speaking Norwegians in general, the students of Norwegian as a second language will need some time and have to spend some effort in order to develop an understanding of the local varieties of the Norwegian language.

There are several ways of grouping Norwegian dialects depending on how detailed a description must be. On a macro level, one can refer to an Eastern and a Western group. The Eastern group may be grouped into East Norwegian and Trøndsk, the Western group into Western and Northern. Intonational patterns are different between Eastern and Western dialects. Eastern dialects are low tone dialects, that is stressed syllables in words get a low tone, western dialects are high tone dialects.Major cities within these groups are:EasternCentral East Norwegian Oslo, Hamar, Fredrikstad
Trøndsk Trondheim, Steinkjer, KristiansundWesternWestern Bergen, Stavanger, Kristiansand
Northern Tromsø, Narvik, Bodø

View Course
One may subdivide the major dialect groups until one reaches a level of very fine detail. A different phonetic cue, word form or syntactic feature, even a very small one, may signal a dialectal difference that Norwegians are well aware of.Olaf Husby, October 2010
© NTNU

Hi there! We hope you're enjoying our article: How many forms of Norwegian?
This article is part of our course: Norwegian for Beginners 1