Signs and symptoms associated with lead

Exposure to lead is generally classified in two different ways:

• Acute exposure i.e. exposure to lead over a short period of time (minutes/hours/days)

• Chronic exposure i.e. exposure to lead over a longer period of time (weeks/months/years)

People’s exposure to lead will result in differing health effects dependent upon whether their exposure is acute or chronic; this is discussed further below:

Lead is generally described as a classic chronic toxin. Eating food or drink or breathing in air contaminated with low levels of lead or lead compounds for a short period usually does not cause any ill effects. However, exposure to high levels of lead in a short time can result in stomach upset, mood changes, poor attention span, headaches, hallucinations and damage to the brain and kidneys in severe cases.

This table gives a summary of the blood lead concentration (BLC) at which certain acute health effects may occur. 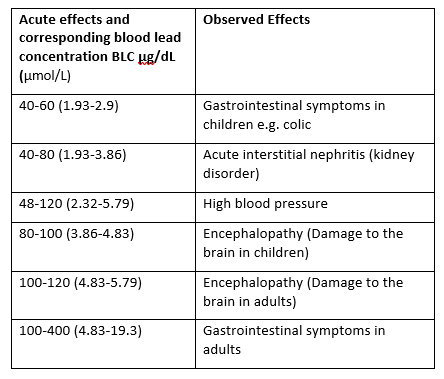 Lower level exposure to lead over a long time can lead to anaemia and low blood pressure, damage to the nervous system, brain and kidneys as well as effects on male and female reproduction which are explained in more detail below:

Heamatotoxicity (damage to the blood)

Lead exposure may lead to anaemia, due to reduced haemoglobin production and a shortened lifespan of red blood cells.

Neurotoxicity (damage to the nervous system)

It has also been noted that lead can cause intelligence and neurobehavioral effects in children and adults. Children’s developing brains appear to be more vulnerable to the effects of lead. Several studies have been carried out to investigate the correlation between lead exposure in children and behaviour and intelligence. Overall, most studies reported an inverse association between blood lead level and IQ in children. Although it is important to note that lead is not the only thing that de-termines a child’s IQ level.

Various experts have concluded that it was not possible to identify a threshold for the association between lead exposure and reduction in IQ.

Nephrotoxicity (damage to the kidneys)

Chronic exposure to lead may cause glomerular sclerosis (hardening of areas of the kidneys), interstitial fibrosis (accumulation of collagen and other molecules in parts of the kidneys) and can damage the proximal tubules within the kidneys.

Cardiovascular toxicity (damage to the heart)

Lead exposure has been associated with changes in heart conduction and rhythm.

Lead may cause genotoxicity however, the studies often involved co-exposure to lead and other compounds. Therefore, it is not possible to attribute the genotoxic effects to lead alone.

Carcinogenicity (can lead cause cancer?)

The International Agency for Research on Cancer (IARC) evaluated the available evidence regarding the ability of inorganic lead compounds to cause cancer. IARC concluded that there was sufficient evidence in experimental animals, but only limited evidence in humans from occupational studies in workers exposed to lead for several years. As a result, inorganic lead compounds were classified as probably able to cause cancer in humans.

Chronic exposure to lead may affect both male and female reproductive functions. Studies of men exposed occupationally to lead have shown a reduction in semen volume, sperm count, sperm motility and an increase in abnormal sperm morphology. Chronic exposure to lead during pregnancy has been associated with health effects including spontaneous abortion, premature birth, fetal growth restriction, neurodevelopmental delay and high blood pressure in the mother.