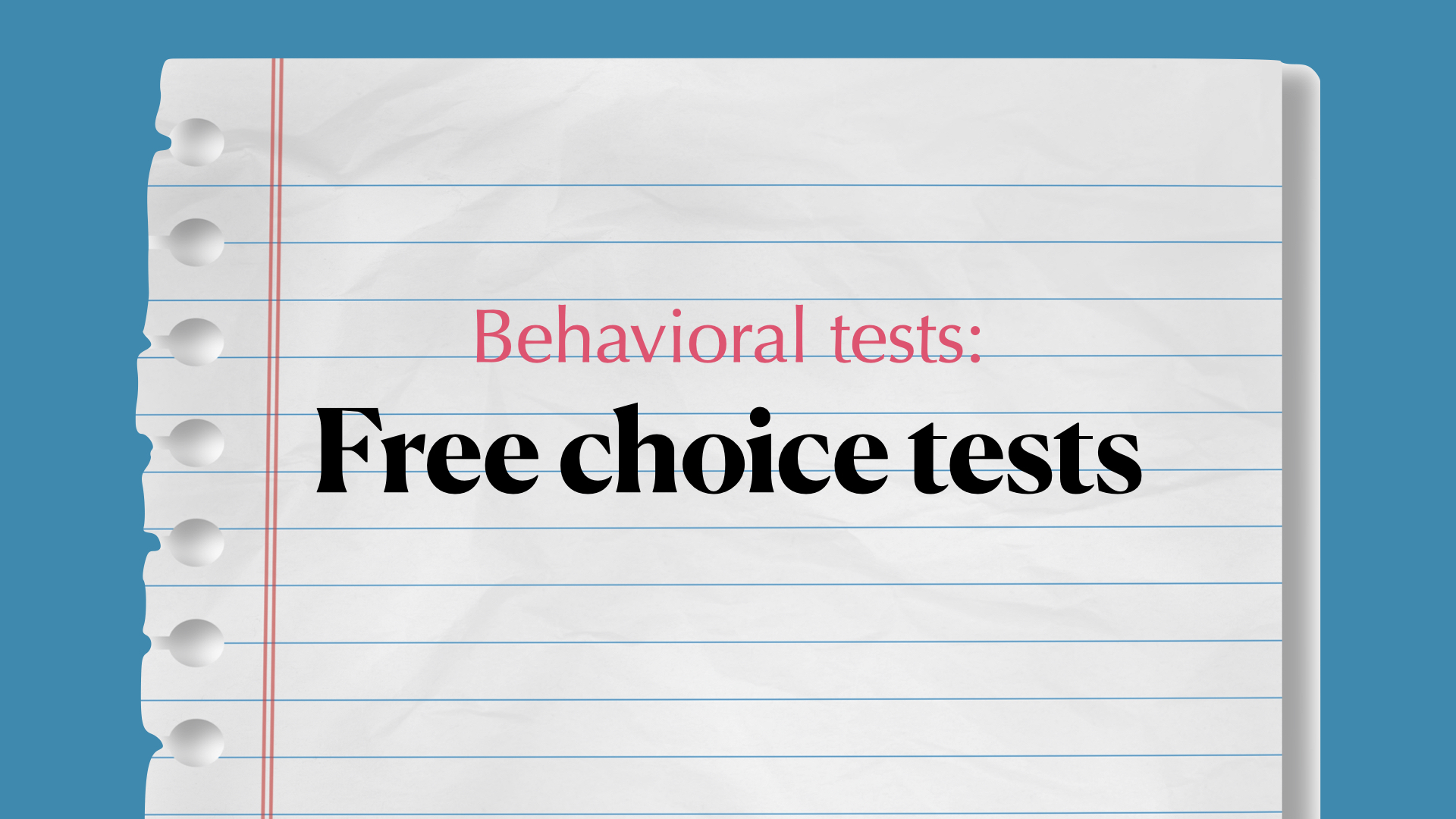 Free-choice tests entail observing how a subject (in this case, an animal) behaves in the presence of a biologically-relevant stimulus.

In free-choice tests, subjects are typically presented with two differing groups of biologically-relevant stimuli. These stimuli must differ according to the feature under investigation. What does this mean?

When we say biologically-relevant stimuli, they do not necessarily mean living objects—they might also be some features of an artificial object.
For example, if you want to understand whether an animal discriminates between two colors, you might present both colors to the animal and see which one is mainly explored. If they show a marked preference for one of the two, definitively, we can say that the animal detected a difference in the color or brightness of the stimuli. You might then discover that this color in nature is predictive of something useful for the animal itself, for instance, it is associated with a healthy potential partner or is predictive of an important source of food.
The assumption underlying free-choice tests is that if subjects are able to discriminate between the variables under investigation, they are expected to reach the stimulus that spontaneously attracts them.

But how can we say that an animal chooses one stimulus over the other? As said before, any behaviour must be translated into numbers. Without numbers, there is no way to make statistical analyses and advance any conclusion.

So, the question to ask now is: how can we convert choice into numbers?

By the first stimulus selected

One measure could be the first choice of animals, the first stimulus they select. So it’s important to define what a choice implies in a given context. For instance, to assess whether animals can count, researchers might record which group of food is reached first. In this context, choice for one stimulus is identified when the animal first touches the group of food–not when it sees or approaches it but touches it.
An example of this is a study we conducted at Parco Natura Viva in Bussolengo, Italy in 2017. Lemurs were presented with both a small and a large quantity of food, and the assumption was that if these animals have the cognitive ability to discriminate between these sizes, they are expected to select the large group. Such a test permits us to establish the minimum size ratio that an animal can identify.
In this case, animal behaviour is converted into a proportion of choice for the larger piece of food. If I have four trials and the animals select the larger amount three times, it’s a 75% choice for the larger food portion.

By the time spent near the stimulus

Another way to measure a “choice” consists of recording the time spent close to one stimulus.
For instance, to assess whether a fish discriminates between conspecifics and heterospecifics, researchers can record the proportion of time near the conspecifics. In this context, we similarly need to define what a choice is, such as: “when the subject is within 10 centimeters from one group of stimulus fish”.
So when measuring using time, how can we convert this behaviour into numbers? If we observe the fish for 15 minutes, and we notice that it spent 600 seconds in front of conspecifics and 300 seconds in front of heterospecific, we might conclude that the fish spent 67% of its time near conspecifics.
Regardless of the exact measure recorded, whether it’s first choice or time spent near the stimuli, researchers record the performance of each subject and then compare the average value with a theoretical value in case animals have no preference at all. If the proportion of choices range from 0 to 1, this theoretical value is equal to 0.5, that is 50% close to one stimulus and 50% close to the other stimulus.
Then, statistical analyses will permit researchers to assess whether the animal performance statistically differs from a chance level to see if we can generalize the data from our sample to the whole population of animals of that species.

By the “looking time”

Looking time is another important variable to record with pre-verbal species (or animals that don’t or have yet to talk).

Looking time was originally used in developmental psychology to assess cognitive abilities of pre-verbal infants and then readapted to animal studies.

What does this entail? If I tell you: “you have just won 1000 Euro!”, you probably looked at the center of the screen with enlarged pupils. Surely that sentence surprised you. Looking time is a powerful means to assess a novelty reaction, as it is one of the most spontaneous reactions in case of odd or new events.
In our case, let’s suppose that researchers are interested in assessing whether dogs can distinguish between eight (8) and sixteen (16) dots as evidence of rudimentary numerical abilities. I can present eight dots on a screen and record a dog’s looking time (let’s suppose five seconds). This is called the dishabituation phase, or when a subject first recognizes a stimulus. Then I can present another eight dots, still eight in number but in different positions within the space, and again record the looking time, then another eight dots and then eight dots again.
Let’s suppose that the dog starts to get bored seeing eight dots each time and ends up looking at it for only two seconds. We can define this period as the habituation phase. This phase is actually when we could present a different number of dots.
If dogs can discriminate between 8 and 16, they are expected to notice the difference and exhibit a surprise response. How can we “numerate” or measure this surprise? By comparing the fixation time in the last stimuli of the habituation phase, which was two seconds, with the stimuli of the dishabituation phase, which was five seconds. If the dog took a longer look at the novelty, this means it has noticed a change between the stimuli, a change indeed in the number of dots.

By the fixation time

Closely related to this procedure, we have another paradigm based on the fixation times. Again, if I have some expectations, a violation of such expectations would generate a surprise response that could be detected by fixation times.
So, going back to the example of numerical abilities, let’s test this by placing a piece of food like an apple into an opaque box, followed by another, and then another. The natural expectation would be “there are three apples in the box”.
Now, let’s suppose that we remove one apple from the box before showing the contents to the animal. In effect, the animal sees only two apples instead of three. If they spontaneously counted the number of food items, they are likely to be surprised to see such an incorrect outcome and hence look longer–who wouldn’t be surprised if 1+1+1 suddenly becomes 2?

Remember that free-choice tests are powerful procedures to assess cognitive or perceptual abilities of animals using biologically-relevant stimuli and in the absence of any rule provided by the experimenter.

We can measure behaviour in free-choice tests either through the first choice, time spent near a stimulus, looking time, or fixation time.