Which babies should be screened for ROP?

Learn why screening babies for ROP is very important. Unless ROP is detected early and promptly treated it can lead to blindness. 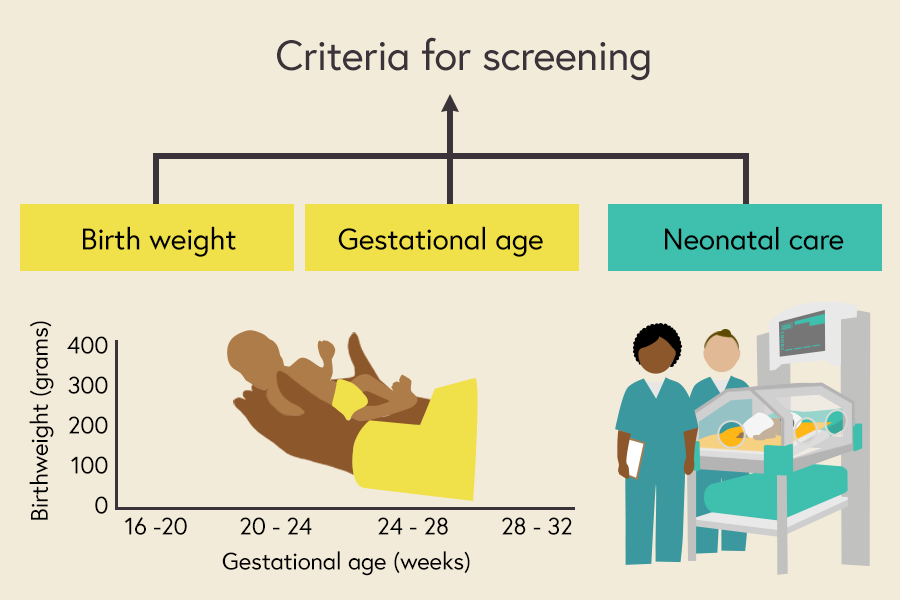 ‘Which babies should be screened?’ is an important question, particularly as which babies are at risk of sight-threatening retinopathy of prematurity (ROP) varies considerably from unit to unit and from country to country. For example, in units where neonatal care is less than ideal, more mature, bigger babies may develop sight-threatening ROP than would in units providing high quality care.

Another challenge is that in many low- and middle-income countries the baby’s gestational age may not be reliable. The mother may not know the date of her last menstrual period and foetal ultrasound is not routinely provided. In these circumstances, gestational age is assessed using clinical signs such as the Ballard score (Lee at el. 2017) but this can be unreliable as it tends to overestimate. To add further complexity, in many low income countries a high proportion of newborns have foetal growth restriction. This means that birth weight is not a good guide for assessing gestational age.

A number of countries have national guidelines indicating which babies should be screened for ROP. These usually include a combination of birth weight and gestational age. Some countries also include additional criteria, for example the United States of America (USA) includes a ‘sickness criteria’.

In neonatal units providing very high quality care in high-income countries, only the most preterm babies are at risk of ROP and therefore need to be screened, for example:

In low- and middle-income countries the screening criteria include more mature, bigger babies (Gilbert 2016), for example:

Ideally, studies should be carried out in a range of neonatal units in each country to determine the characteristics of babies developing sight-threatening ROP as this informs which babies should be screened. Misleading data may be obtained if, for example, data from one unit which is providing high quality neonatal care is used to extrapolate to all units. The guidelines must also be reviewed regularly as sometimes they need to be modified to include more mature infants, as has happened in Saudi Arabia, for example.

Variation in the criteria for screening recommended in published guidelines from different countries, by level of economic development (see reference below Gilbert 2016).

Whichever criteria are used, it is the responsibility of the neonatologist to identify which babies should be screened and a neonatal nurse who prepares the babies for screening.

When should screening start?

Preterm babies are not born with ROP as it only develops during the first few weeks after birth. The scheduling of ROP screening examinations should ensure that eyes likely to need treatment are identified in a timely manner and minimise the number of examinations for babies at low risk of ROP. 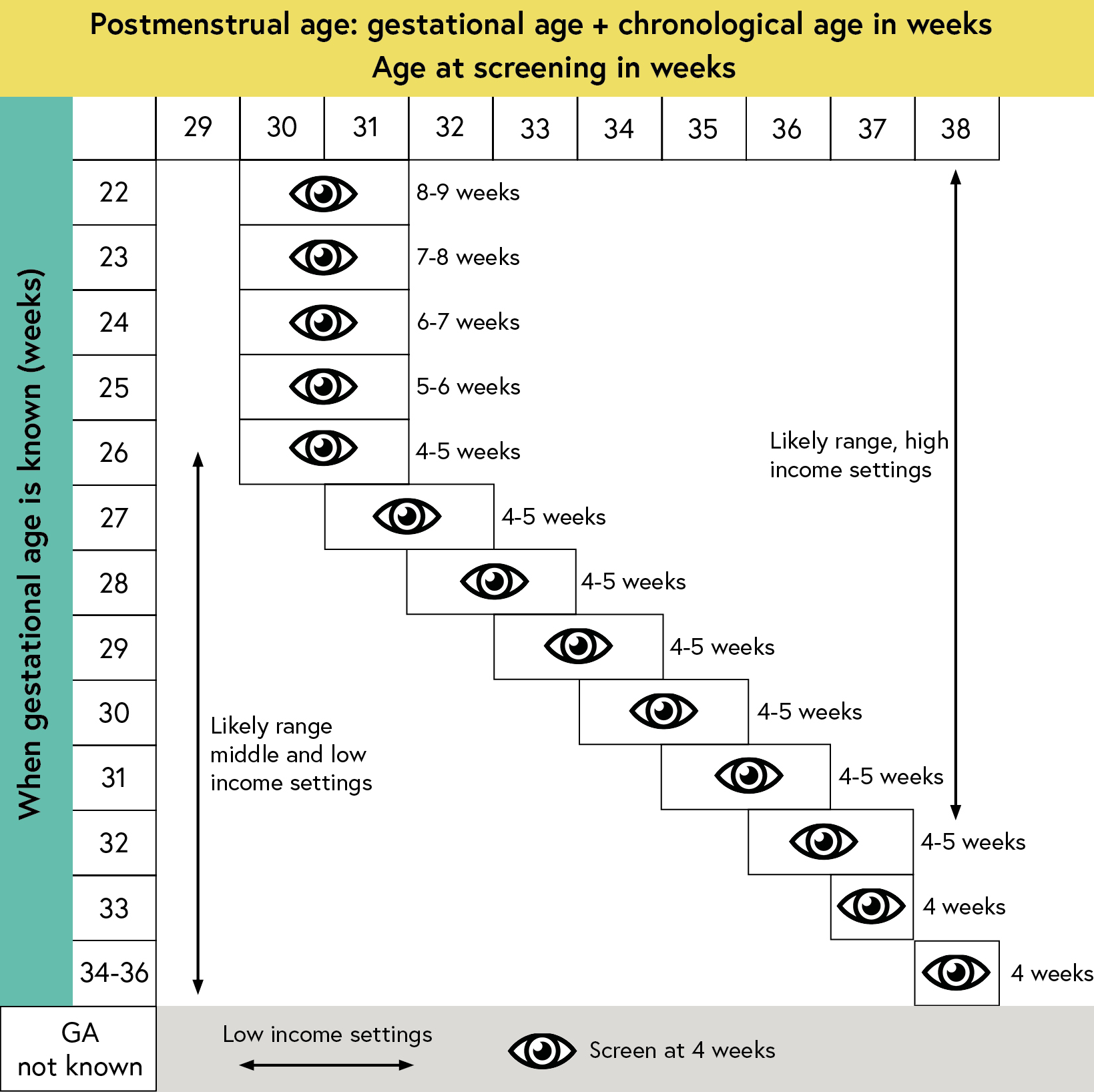 In high-income settings, where the quality of neonatal care is high, ROP takes longer to develop in very immature infants.

In babies less than 27 weeks gestational age the screening is planned when they are at a postmenstrual age of 30 to 31 weeks.

For babies born between 27 to 32 weeks gestational age the first screening should ideally should take place by four to five weeks after birth.

For babies over 33 weeks gestational age screening is planned for the fourth week after birth.

In low- and middle-income settings, where the quality of care is less good, babies may have been exposed to hyperoxia (excessive oxygen supply) for several days and in situations where the gestational age is often unreliable or unknown, it is useful to have guidelines for the timing of the first screening which are easy to remember and implement. For example, in India the first screening must be by 30 days of life or at four weeks after birth.

If the baby is very premature or has been very sick or received a lot of oxygen, earlier screening should be considered, such as between 21 and 25 days of life, but more research is needed.

At each screening, including the first, one of three management decisions is made:

If treatment is needed, this must be delivered within 48 to 72 hours, or even earlier if aggressive posterior ROP is detected.

Stopping screening: All eligible babies must be screened before discharge or transfer to another neonatal unit. Making sure this happens improves the parents’ awareness of ROP and, if the retinal blood vessels are mature at the first examination, they can be told that they do not need to bring their baby back for further screening. Examination before discharge has been shown to increase compliance with screening after discharge, if needed.

Management decisions are shown in the practical Job Aid below, which you can download and use in your setting as a guide

It is very important that accurate records are kept at every screening for all babies who have been screened for ROP. The following should be entered into the infant’s medical records:

This helps to ensure that babies are screened at the right time, that follow-up screening is done when needed and for medico-legal reasons.

At the moment gestational age and birth weight are the most frequently used criteria for screening and some countries add ‘sickness’ or ‘exposure to risk factors’ criteria. However, as we have seen above, there are limitations and challenges with all of these criteria. This has led researchers to explore other factors which may help to predict which babies are at the greatest risk and, conversely, those at low risk.

Several studies have investigated change in insulin-like growth factor 1 during the first few weeks of life, and although the findings were encouraging in predicting babies most at risk, the assays are expensive and need to be repeated. This has led researchers to investigate weight gain during the first few weeks of life as a surrogate for insulin-like growth factor 1, and several different groups have developed statistical models. These studies show that slow, early postnatal weight gain does predict sight-threatening ROP, but the sensitivity can be less than 100% (Lin and Bibenbaum 2019). This means that weight gain alone cannot be used to reliably identify all babies who subsequently developing sight threatening ROP. Another limitation is that all the statistical models have been developed in high income settings using data from very preterm babies who have received excellent neonatal care, and studies show that they do not predict sight threatening ROP in settings where babies are more exposed to risk factors.

In an ideal world, only babies at very high risk of developing sight-threatening ROP would be screened. This would reduce stress to the babies screened unnecessarily, and reduce the cost of screening for service providers and parents. However, we are still a long way from this ideal.