Venus and Cupid – the Gods of Love

How were Venus and Cupid envisaged when the Sidneys were writing? Read this short introduction by Alison Findlay to find out. 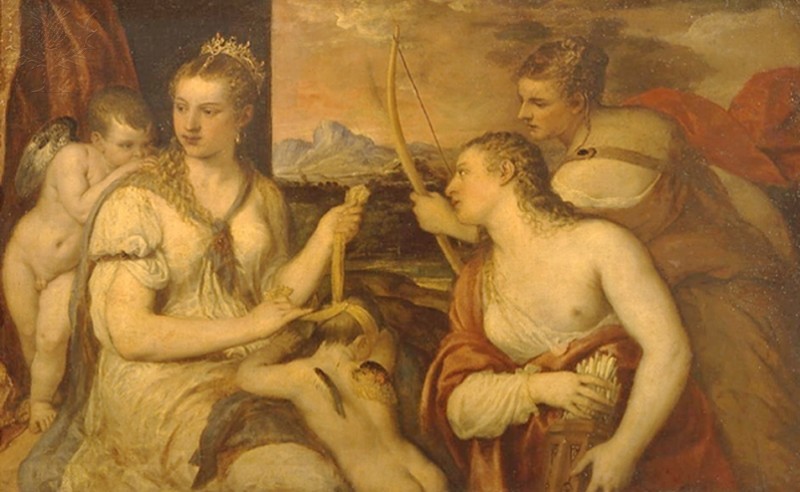 How were Venus and Cupid envisaged when the Sidneys were writing? Read this short introduction by Alison Findlay and look at the paintings in the related files below (as pdfs) or links to the assets files below to find out. Then post a comment.

Venus, the Roman goddess of love (Aphrodite in Greek mythology), features prominently in literature and painting in Renaissance Europe, often alongside her son Cupid, the god of desire, who is armed with a bow and arrows. You can view all the paintings discussed and numbered in the attached pdf files.

According to the early modern mythographer, Robert Albott ‘Venus wife of Vulcan, is fained [supposed] to be born of the froth of the Sea, the Goddesse of love, beauty, and all sensual delights. She was adored in Cyprus.’ Sandro Botticelli’s painting ‘The Birth of Venus’ (1) represents the myth of Venus’s birth from the sea. Her beauty made her a notoriously difficult subject for painters but that did not stop them, as the image by Titian copied by Rubens shows (2). Depicting someone in the person of Venus, as Hans Holbein did (3) was an obvious complement to a woman’s beauty. Although Venus was married to Vulcan, god of the forge, she had numerous lovers including the god Mars, supposedly the father of Cupid. Another famous painting by Botticelli shows Venus, the goddess of love, conquering an exhausted Mars (4) Note, however, the reversed power dynamic in Wittewael’s image showing Venus gripped by Mars (4a). Ovid’s Metamorphoses, translated into English by Golding in 1567, tells how Vulcan caught Venus and Mars in a net made of golden wire. (5) This account would have been well known to the Sidney writers. It was dramatized for a popular audience by Thomas Heywood in his play The Brazen Age (1613). Venus is the protagonist of Shakespeare’s best- selling poem Venus and Adonis (1594) which recounts how she falls in love with the young man Adonis who rejects her love in favour of going to hunt a boar with his friends, and is subsequently killed, to Venus’s grief (6). Cupid and Venus also featured prominently in entertainments at the royal court, such as Ben Jonson’s masques ‘The Masque of Beauty’ (1608) ‘The Haddington Masque’ (1608) and ‘Love Freed from Ignorance and Folly’ (1611) which members of the Sidney-Herbert families would have witnessed.

Cupid, the god of physical desire, is often depicted in art and literature with his weapons: a bow and arrows (or darts) to show how he can strike both mortals and gods with desire at any moment (7). He often features as a child to show the childish (or foolish) behaviour of lovers, and often as mischievous as in Cranach’s painting of him as a honey thief (8). His blindness symbolizes the blindness of love (9, 10). The much-visited statue of Cupid as Eros (carnal love) in Piccadilly Circus, London shows his enduring power as an icon of desire.

There are numerous allusions to Venus and Cupid in the poetry of the Sidneys. Lady Mary Wroth’s ‘Song’ for example, begins ‘Say Venus how long have I loved, and served you here?’ and goes on to ask ‘Command that wayward Child your Son to grant your right, / And that his Bow and shafts [arrows] he yield to your fair sight, / To you who have the eyes of joy, the heart of love’. In this activity, we will focus specifically on dramatizations of the gods Venus and Cupid.

Post a comment saying which image of Venus or Cupid you think is most appropriate and why.

References: Robert Albott’s “Wit’s Theatre of the Little World” (London, 1599) is the source of the quotation about Venus above.