Find out more
Home / Nature & Environment / Sustainability, Society and You / The three pillars of sustainability 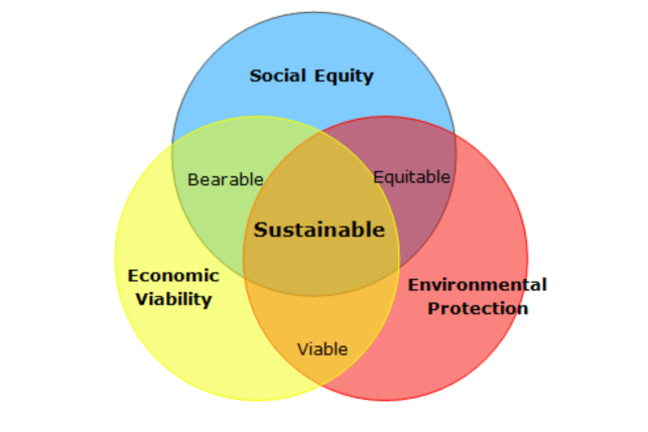 Sustainability is often represented diagrammatically. The figure at the top of this page suggests that there are three pillars of sustainability – economic viability, environmental protection and social equity.

Other dimensions could be represented – for example ‘technical feasibility’, ‘political legitimacy’ and ‘institutional capacity’. Our focus in this course is upon the ‘three pillars’. They can help us to look beyond the complexities of contested terms like ‘development’ (is it positive, is it negative?)

Global population has exceeded 7 billion people in 2015. A century ago there were about 1.6 billion people in the world and in the 1960’s there were about half the people there are today. The population is going to keep on growing although the rate at which it does this is disputed. Each person in the world requires resources to survive and so the strain on the earth to supply these resources will also grow.

Although a bigger population generally means more mouths to feed, there is not an even distribution of consumption patterns throughout the world. One of the biggest indicators of unsustainability is in the misdistribution of wealth. Over a third of the world still live in poverty with limited access to energy, water or food.

In 2006, a team of scholars with the United Nations University’s World Institute for Development Economics Research published the first paper to tally, for the entire world, all the major elements of household wealth, everything from financial assets and debts to land, homes, and other tangible property.

Personal wealth is distributed so unevenly across the world that the richest 2% of adults own more than 50% of the world’s assets while the poorest half hold only 1% of wealth. The USA consumes 25% of the world’s energy with a share of the world population of 4.5%. The figures for material, water and food consumption between the richest nations and the poorest display a similar level of disparity.

Population growth is much higher in developing countries, while resource consumption and pollution is higher in developed countries. The gap between the ends of the spectrum has been increasing in a similar exponential fashion.

Let’s just consider motivations for exploring sustainability – these can be different depending on your world view: logic, emotion or instinct can be the drivers. Generally they are based around concepts of humanity inherently striving for survival. The following are three viewpoints for sustainability:

It is helpful to ask ourselves what our motivations are for seeking sustainability. This can help us in articulating our understanding of sustainability and our commitment (or not) to achieving it.

Think about: what are your motivations for taking this course? What drives your interest – economic viability, environmental protection, social equity? Which viewpoint is closest to yours?