Some of us take water for granted, some of us don't have enough of it. Here we talk about water supply, water scarcity and water debt. 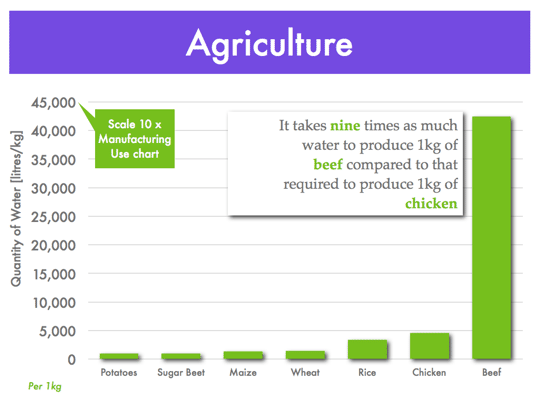 Some of us take water for granted, some of us don’t have enough of it. Water, perhaps more than any other resource, encapsulates the imbalances within our society. In this article, we look at water supply, water scarcity, and water debt. We also touch on ‘hydropolitics’, for example, water as a target of terrorism or of military occupation.

Water is a resource often taken for granted in more economically developed countries; people assume that fresh water will be available when the tap is turned on and like electricity do not question the processes or constraints involved in delivering it. However, for many people in the world, easily available fresh water is not the case and finding clean fresh water for drinking, cleaning and growing plants is a serious challenge. The fresh water systems of the planet are under threat from climate change, unsustainable use and pollution.

The image we have of the Earth as the ‘Blue Planet’ is slightly misleading when we consider the water available for our use. Most of the Earth is covered by seas and oceans accounting for over 97% of the total water on the planet, leaving less than 3% of the planet’s water that is not salty (potable). Of the freshwater that is present, 2% is locked in icecaps and glaciers, and a large proportion of the remaining 1% lies too far underground to exploit. 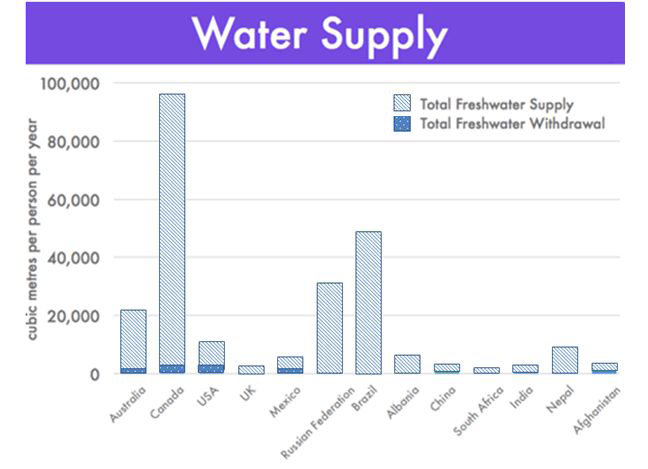 In many countries, only a very small proportion of available water is actually extracted for use. The total resource that is available to a country or a region is usually termed the ‘supply’. The amount that we extract for use is termed the ‘withdrawal’. 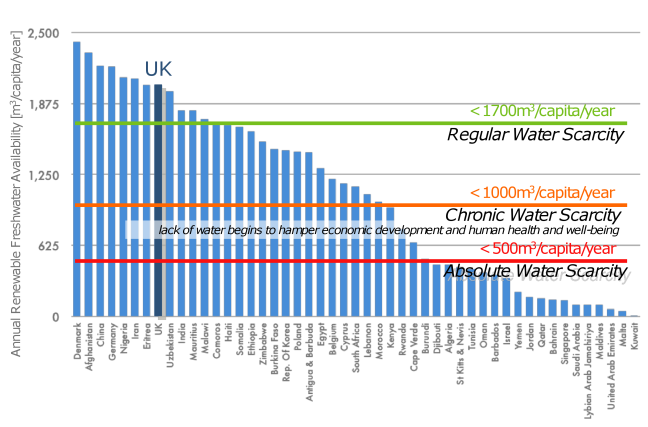 By widely-used water stress definitions, the UK is currently subject to occasional or local water stress. This is evident from our infrequent experiences of hosepipe bans and pleas for water conservation from water companies. As climate changes and precipitation patterns alter, the occurrence of water stress is predicted to become more widespread.

This, combined with population increases in many places, will result in more extensive water shortages relative to demand.

Absolute scarcity in these terms (500 m3/person/year) is less than 1.5 cubic meters of water per person per day. This seems like a lot, but usually we are only thinking about the domestic portion of water use rather than the per capita water availability necessary to maintain a functioning economy. Lack of water availability can inhibit industrial and economic development.

For general human health requirements, volumes required are as follow:

If the amount of ground water withdrawn exceeds natural inflow, there is a water debt. In such cases, water should be considered a non-renewable resource that is being mined. As the world’s population and industrial production of goods increase, the use of water will also accelerate. The world per capita use of water in 1975 was about 700 m3/year giving a total human use of 3850 km3/year. In 2006 the world use of water was about 6000 km3/year, which is a significant fraction of the naturally available fresh water. 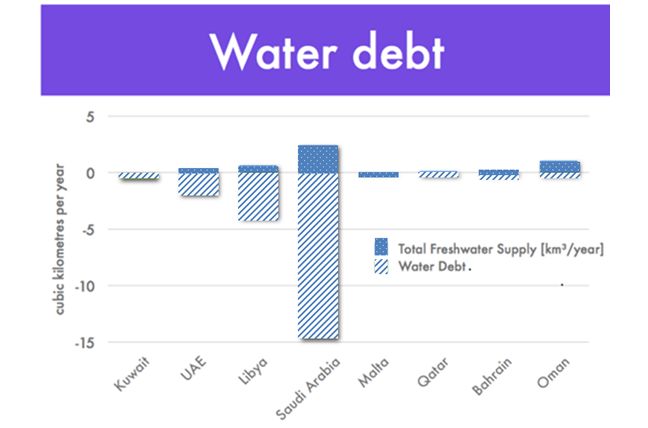 Some water-stressed countries withdraw considerably more water than is renewed annually, leading to significant ‘water debt’. Kuwait is currently the world’s most water scarce nation and also the worst water debt country, with an annual renewable freshwater supply of approximately 0.02 km3/year and an annual freshwater withdrawal of around 0.54 km3/year (2700% of available renewable supply). Saudi Arabia extracts the greatest volume of water (14.62 km3/year) beyond its renewable supply (2.4 km3/year) and uses seven times more than it has available, but UAE (1.91 km3/year debt and consumption 10 times renewable supply) and Libya (4 km3/year and nearly 8 times supply) are also in severe water debt.

Water-debt countries and regions meet their water withdrawals beyond the renewable supply in a number of ways, including drawing water across political boundaries, or depleting ‘fossil aquifers’ in some cases causing not only extraction of ancient groundwater reserves, but also causing the irreparable collapse of the geological structure, thus preventing future recharge.

Energy-rich but water-poor countries, such as the water-stressed and water-debt oil-producing countries of the Middle East may use desalination techniques to produce freshwater from sea water.

Desalination is the process of converting seawater into freshwater. Seawater contains about 3.5% salt, and one cubic meter of sea water contains around 40kg of salt. To produce ‘freshwater’ the salt content must be reduced to less than 0.05%.

As well as being costly in terms of energy, desalination also has environmental impacts: discharge of very salty water may locally kill plants and animals intolerant to salt and alter the habitat and local ecosystems.

Global use of water 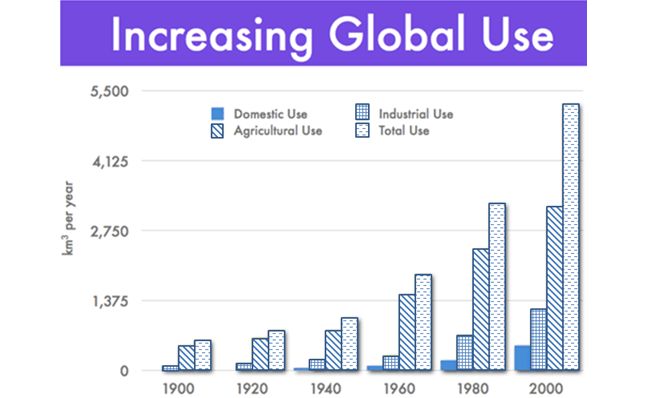 Water use has increased exponentially over the last century. This is due not only to an increase in population and direct water need, but also that population’s associated consumption of food and manufactured goods which both consume water.

Of the freshwater that is withdrawn for human use, in the industrial world, the bulk of water is used for industry. In developing countries the bulk is used for agriculture and in places like Afghanistan and Nepal, this is 99%. In all countries, domestic use is a small, but important part.

As the human population increases, there is growing concern that there won’t be sufficient water to grow the food required. Meat takes much more water to produce than cereals, and a steady increase in meat consumption has increased worldwide water stress. (See figure at the top of this page.)

Manufacturing processes of various types often require large amounts of water. In many cases, these processes were developed at a time when water scarcity was less realised than it now is. Water conservation measures taken by industry can be improved with the development of new equipment and processes that require less water. 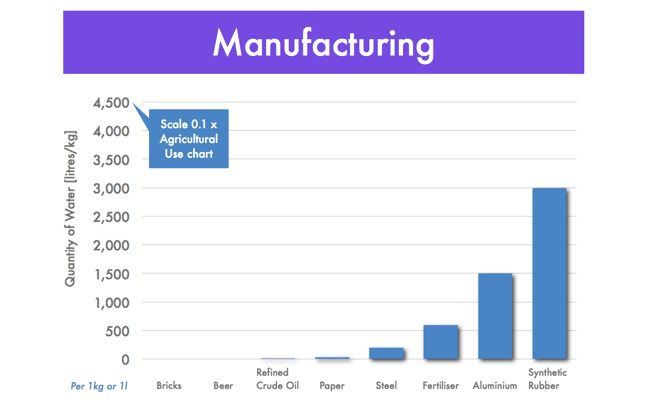 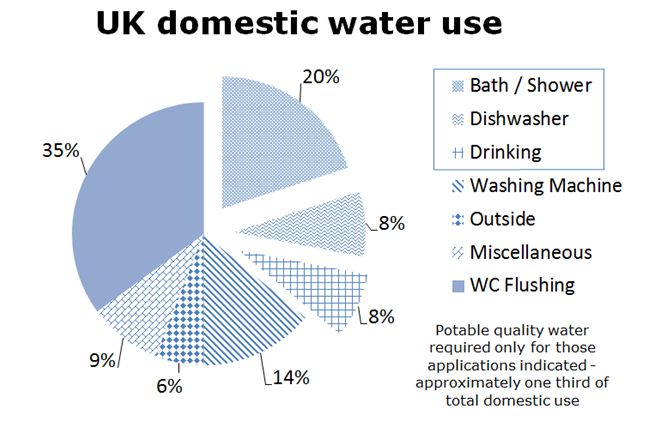 Although domestic water use accounts for only a small fraction of the total, it is concentrated in urban areas where it may cause local problems. There are many ways in which domestic water use could be reduced at a relatively small cost. Water pricing policies will become increasingly important. Public perception of water is based on price and availability.

Above table sourced from The Open University under a Creative Commons Attribution-NonCommercial-ShareAlike 2.0 Licence http://www.open.edu/openlearn/science-maths-technology/science/physics-and-astronomy/physics/renewable-energy

All water that is piped into homes in the UK is treated to very high EU quality standards. Much of the water we use domestically is consumed in non-potable uses such as gardening and flushing toilets. Only uses including drinking, cooking and for baths and showers need to be potable for health reasons. These uses account for only around one-third of total supply.

Many countries are facing a global water shortage that is linked to their food supply. There are a number of other ways in which water supply may affect world politics. Conflict events may fall into these categories:

Control of Water Resources: Water supplies or access to water at the root of tensions

Military Tool: Water resources, or water systems themselves used by a nation or state as a weapon during military action

Political Tool: Water resources, or water systems themselves, used by a nation, state or non-state actors for a political goal

Terrorism: Water resources, or water systems, as targets or tools of violence or coercion by a non-state actor

Development Disputes: Water resources or systems as source of contention in the context of social and economic development

Sustainability debates often focus upon energy supplies, and the depletion of non-renewable resources. Access to clean water is as much of a problem if not more so, and although considered a ubiquitous renewable resources, this is only the case if treated with care and consumed and treated in a sustainable manner.

Think about: how would your lifestyle change if you moved from a situation of water plenty to water scarcity? For those of you living with water scarcity already, how does it affect you on a daily basis?