Skip main navigation
Home / Nature & Environment / Sustainability, Society and You / Why Are Forests Important and How Can We Protect Them?

Why Are Forests Important and How Can We Protect Them?

How important are our forests and are we doing enough to protect them? Read on to learn more about sustainable forestry management. 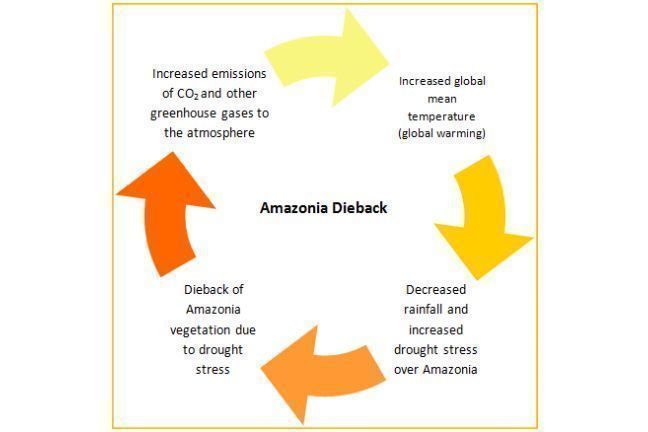 Forests across the globe are important for three broad reasons:

The concept of “Amazonia dieback”

Climate change could act as a major debilitating stressor – in combination with human deforestation – on maintaining the sustainability of forests across the globe. The Amazon and the concept of “Amazonia dieback” highlights this, specifically.Global climate modelling experiments indicate that if climate change occurs under a “business as usual scenario” – i.e. without any attempts to reduce future emissions of greenhouse gases like CO2, there could be major loss of the Amazon rainforest from the year 2050 onwards. This would be as a result from decreased rainfall over the region and subsequent droughts, which impose a stress on the vegetation that currently covers much of the region. In turn, this could induce a positive feedback on global climate, whereby additional CO2 is released back into the atmosphere as a result of the death of vegetation and reduced photosynthesis and carbon storage. This release of CO2 would then further exacerbate global warming, leading to further Amazonia forest loss, and then further release of CO2; i.e. positive feedback. A simplified diagram of this positive feedback mechanism is displayed at the top of the page.This feedback mechanism is just one of many feedback mechanisms that occur in the climate system and which can speed up or slow down global warming. For example, there is ice albedo feedback, and water vapour feedback. While the Amazonia dieback feedback mechanism is a positive feedback mechanism, because it speeds up warming of the atmosphere, there are also negative feedbacks, which can slow down warming. The next figure (below) shows how positive and negative feedback mechanisms affect global warming. 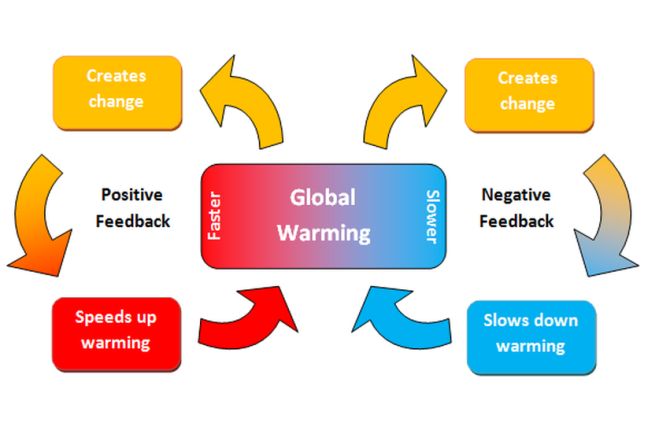 Positive feedback mechanisms such as Amazonia dieback in climate change highlight an important issue with respect to sustainability. As the positive feedback loop develops and becomes stronger and speeds up global warming, it may become more difficult to slow down global warming, thus making sustainability more challenging in the process. With the example of the Amazonia dieback feedback mechanism for instance, counteracting CO2 emissions from dieback by planting more trees would become more difficult as the feedback loop becomes stronger – more trees would need to be planted to counteract higher CO2 emissions from increased dieback. This implies that early intervention and sustainable management strategies are paramount at an early stage of the development of a positive feedback cycle.While observations of past droughts in 2005 and 2010 indicate that there is potential for Amazonia dieback to occur and cause a positive feedback loop, the latest climate change modelling studies indicate that there is high uncertainty in knowing how Amazonia might respond under climate change scenarios in the future.

View Course
Climate modelling computer programs are very complex and simulations take several weeks or months to run on a powerful supercomputer. One recent simulation shows that by the end of the century a large fraction of the forested area is converted to desert as a result of climate change. Any such simulation is just one possible future and there are many uncertainties; i.e. any one simulated fate of the Amazon is not a 100% certainty. Other climate modelling experiments for Amazonia indicate that there is a 26% probability of a transition to a rainfall regime more appropriate for savannah grasslands, by the end of the century under climate change (Malhi et al., 2009). Yet other experiments have suggested that there is a 75% probability that Amazonia forest area could decrease by 3% for the period 2020–2029 and by 18% by the end of the century (Salazar et al., 2007).Initiatives to manage our forestry resourcesThe Forest Stewardship Council (FSC) is a global-scale initiative with national and local-scale influence.The formation of the FSC was largely in response to the failure of an intergovernmental process to agree on a global forest compact at the 1992 Rio Earth Summit.The FSC is an independent, non-governmental, not-for-profit organisation established to promote the responsible management of the world’s forests. It is a multi-stakeholder organisation and through its membership, develops forest management and chain of custody standards, delivers trademark assurance and provides accreditation services to a global network of committed businesses, organisations and communities (FSC, 2012a).Sustainability is central to the overall misson of the FSC, which is that they:“Shall promote environmentally appropriate, socially beneficial, and economically viable management of the world’s forests” (FSC, 2012a).”Their mission focuses upon the pillars of sustainability as follows:

The FSC standards for forest management have now been applied in over 57 countries around the world. Forests are inspected and certified against strict standards based on FSC’s 10 Principles of Forest Stewardship. These ten principles (FSC UK, 2012b) are listed below. Forest inspections are undertaken by independent organisations, such as the Soil Association, that are accredited by the FSC. In order to be given FSC certification a forest must be managed in an environmentally appropriate, socially beneficial and economically viable manner. Forests that meet these strict standards are given FSC certification and the timber allowed to carry the FSC label. The FSC logo on a wood or wood based product is as assurance that it is made with, or contains, wood that comes from FSC certified forests or from post-consumer waste. The FSC label is currently found on over 10,000 product lines in the UK alone. It can appear on garden furniture, decking, sheds, conservatories, tools, kitchen, bathroom and general housewares, brushes, wall paper, flooring, doors, shelves, furniture, toilet tissue, paper, pencils etc. It can also be found on less obvious items such as charcoal, and there are now also coffins available.

Forests are important for regulating the Earth’s climate. Large-scale deforestation could release CO2 into the atmosphere and exacerbate global warming. There remain uncertainties with regard to whether Amazonia dieback will occur in the future under climate change but this is not a reason to doubt present day action on managing forests sustainably. Sustainable forest management benefits indigenous forest-dwelling communities who reply upon forests for their survival and often place significant cultural and spiritual values on them. Furthermore, forests are a major source of global biodiversity.There are many initiatives on global, regional and local scales that seek to protect the world’s forests. For example:Do some research into one of these, or another initiative that you are aware of:
© Except for third party materials and where otherwise indicated, the copyright in the content provided on this page is owned by The University of Nottingham and licensed under a Creative Commons Attribution-NonCommercial-ShareAlike UK 2.0 Licence

Hi there! We hope you're enjoying our article: Why Are Forests Important and How Can We Protect Them?
This article is part of our course: Sustainability, Society and You