How does it work?

Read this article to find out more about e-scooters and their growing popularity.

Shared e-scooters are a form of micromobility that has grown rapidly since their introduction in 2018, pioneered by Lime and Bird in the US.

They are two wheeled scooters with small, electric motors and a platform to stand on whilst riding and can be spread around a city for the general public to use. Companies in this field have seen dramatic market growth and huge valuations: Bird, for example, became the fastest US company to a $1 billion valuation. Established shared mobility companies such as Uber are among the biggest investors in e-scooter start-ups, investing in both Lime and Voi. 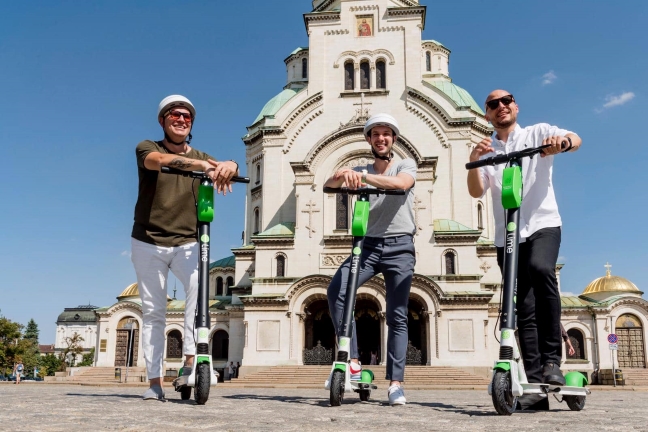 E-scooters are predominantly dockless and rely on an app for use. Users unlock the scooter through an app at a cost (around 1 £/€) and then pay a charge per minute use (around 0.15 £/€) until they reach their destination.

Dockless systems give users the convenience and freedom to start and end their journeys at any location, effectively traveling from door to door. However, this brings with it complications in logistics for the operators and makes vandalism and theft more common. A common approach to help mitigate this is for e-scooter providers to create a zone of operation, whereby if a vehicle travels outside of the zone, it can no longer be operated.

E-scooters are intended as a sustainable method of ‘first and last mile’ transportation primarily targeting large towns and cities. The UK National Travel Survey 2018 showed that 58% of car trips are fewer than five miles (eight km) and therefore could potentially be replaced by e-scooters, with a typical range of 40 miles (64 km). However, e-scooters typically compete with docked and dockless electric bikes and pedal bikes and therefore may not help cities alleviate congestion. Safety is often a concern along with street clutter, and in many places e-scooters have arrived before the much needed infrastructure, policy, and awareness to support them.

The common operating model for providers is to place e-scooters in central locations close to city amenities, other transportation hubs (such as train stations), or in high footfall areas. Throughout the day their charge will decrease due to use, and operators commission third party gig-workers* to collect e-scooters that are low on charge in the evening and transport them to a facility where they can be recharged overnight. Once charged, units will be placed back in designated areas and the cycle starts again. Some operators employ swappable battery technologies which removes the need for gig-workers to transport scooters in vans and instead use other forms of low carbon transport, such as cargo bikes, to travel between each e-scooter. Cities should consider indirect carbon emissions associated with e-scooter schemes when planning or procuring services.

Like many forms of transport, e-scooters have positive and negative effects on cities. It is crucial that authorities understand these in order to limit the negative impacts and ensure this new form of mobility works for citizens, first and foremost, and the operators.

* Gig-workers are independent contractors or freelancers who enter into formal agreements with on-demand companies to provide services to clients.

Lime was the first operator to offer services in Paris, launching in June 2018. During the following 12 months, the market grew rapidly with 12 operators in the city deploying 20,000 vehicles in total. This was a major concern for the city as there was nothing in place to control the market and the streets became littered with vehicles, considered by many as an eyesore, along with an increasing number of accidents involving both pedestrians and other road users.

This led to the creation of a framework of regulations for e-scooter companies and users by the city to try and improve safety and control deployment of vehicles. This included:

However, these regulations were insufficient as the city still had relatively little ability to monitor the services quality and compliance to the local rulings. As such, Paris decided to tender for operators to run services in the city.

The tender offered three companies the right to operate up to 5,000 units each within the city’s boundaries and the applications were marked according to three categories: User Safety (30% weighting), Operations – management, maintenance, and charging (30% weighting), and Environmental Responsibility (40% weighting). Through this tender Paris selected the best operators for their city providing a framework for sustainable mobility.

E-scooters are a relatively new form of transport. If you have used them, discuss your experience with them below. And if you’ve not yet tried one, what is it that has stopped you?