The impact of meltwater on ice dynamics

There is another reason why supraglacial lakes are of importance when it comes to thinking about glacier and ice sheet stability. This is because under certain conditions, water generated at the surface can actually penetrate through the ice body and ultimately access the bed of the glacier. It can do this by travelling via crevasses and what are known as englacial pathways through the ice.

Most glaciers sit either on solid bedrock or on loose, unconsolidated sediments. While a key defining feature of glaciers and ice sheets is their ability to move through the landscape, this movement is limited by the friction that is generated at the junction between ice and bed. However, if water can access the bed of a glacier then it can have a lubricating effect, helping the ice to move more readily across its bed.

The image below is a diagram of how glaciers might exist in a mountain environment. It shows a main glacier that is fed by a smaller tributary glacier, both of which flow down from the mountains towards a proglacial lake. The image is also a conceptual model of glacier hydrology. It highlights that streams and lakes may exist on an ice surface, and that on occasions, this surface water can access the glacier bed. 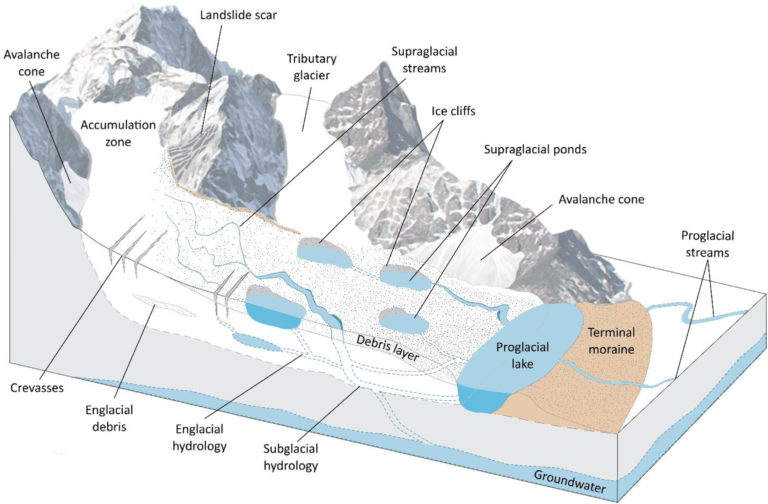 It is particularly difficult for us to observe subglacial locations at the base of glaciers. Nevertheless, we have a good understanding of how subglacial water is able to influence and control the speed with which ice slides over its bed. We know this because in the summertime, when much more meltwater is generated at the surface due to higher air temperatures, we see a coincident increase in the sliding velocity of a glacier.

We can go even further, and if we carefully monitor and measure hourly air temperatures throughout a whole melt season, as well as measuring how much melt is generated, and recording glacier motion, then we see that glacier speed-up events are closely associated with high melt events. The only explanation for this close relationship is that the melt that is being generated at the surface is accessing these influential subglacial locations.

Such speed-up events have been observed with the draining of supraglacial lakes in Greenland, as discussed above, but they have also been widely recorded on much smaller glaciers where supraglacial lakes do not form. Again, it is the association between larger volumes of meltwater generated at the surface by higher air temperatures, and the coincident increase in glacier velocity that make us confident of the lubricating effect of subglacial water, and that it is this water generated at the surface that must be finding its way to the bed.

In the case of ‘normal’ glaciers, it is thought that water is routed across the surface in supraglacial channels, but that these channels are intersected by crevasses and vertical shafts known as moulins that then direct water into the glacier and ultimately to the bed.

However, you may be wondering why we should be interested in glacier sliding, and the fact that as our planet warms, and more melt is generated on glaciers, we might expect more rapid sliding to take place.

Right at the beginning of this week, we learned that a glacier is defined as a body of ice that is made from compressed snow, and that moves downhill under the force of gravity. The presence of water at the bed of a glacier therefore speeds up the rate at which it moves downhill. As a glacier moves downhill it is exposed to warmer air temperatures (since air warms up as altitude is lost), and so a glacier experiences enhanced melting. This causes a feedback in terms of further increasing sliding rates, but this increased amount of melt also constitutes mass loss, and thus helps to reduce the size and volume of the glacier.

It is therefore apparent that warmer temperatures on glaciers causes them to shrink and the lost volume to ultimately make its way to the oceans and contribute to sea level rise. However, we have also learned that enhanced melting can also have more complicated impacts too – it can lead to a reduction in surface albedo and an increase in glacier sliding velocity. Both of these processes lead to further mass balance losses and thus further shrinkage of a glacier.

If you are intersted in finding out more about the diagram above, you can find the original article here: The hydrology of debris-covered glaciers – state of the science and future research directions.