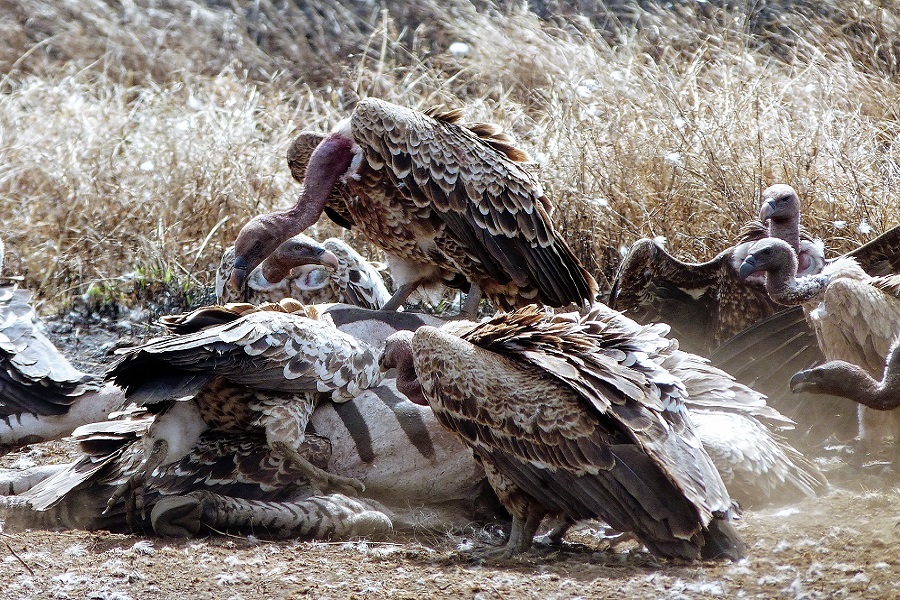 How do animals fit into nutrient cycling?

We have already seen that microbes like bacteria and fungi can play a key role in influencing the flow of energy and matter through an ecosystem. In addition to these microorganisms, we know that larger organisms like plants and animals are important in nutrient cycling too.

Animal species play a vital role in cycling nutrients through our ecosystems globally, whether in terrestrial or aquatic ecosystems. This can occur either within a single habitat, or these nutrients can be translocated across habitats or ecosystems. Animals can feed in one area and then migrate to new sites. They carry nutrients into new areas by depositing faeces and urine in the environment, and ultimately when these animals die their decomposing bodies also become a source of nutrients.

One group of organisms key to nutrient cycling in aquatic environments is cetaceans. Our oceans previously contained around 10 times as many whales as they do at present, but extensive hunting over the last 300 years has caused vast declines in their populations of between 60 to 90%. A recent study looked at the movement of phosphorus, a nutrient that is vital for plant growth. They discovered that whales are only able to cycle approximately 20% of the phosphorus that populations moved prior to this period of intense hunting and decline. Easily accessible stocks of phosphorus, commonly used in agricultural fertilisers, may run out in the next 50 years. Therefore restoring populations of large animals, including whales, could help to increase global stocks of phosphorus that are available in the future.

A focus on decomposition

On land a range of animals are involved in nutrient cycling and decomposition. By examining the decomposition of carrion (the remains of dead animals) we can answer questions about decomposition rates and ecosystem functioning to help manage and conserve natural environments more effectively. Using forensics to investigate carrion decomposition can also help us to work out unexplained animal deaths, such as those that may have been hunted or poisoned.

In addition to microorganisms, the decomposition of carrion occurs via the actions of invertebrates like flies and beetles, and large scavengers like raccoons and vultures. We see these organisms act in a sequential manner, all with different roles in the decomposition of the body. The protein and carbohydrates in animal tissue are used by bacteria to grow and multiply. This process results in the generation of a range of chemicals that leads to a putrid odour and can attract invertebrates to the remains. First to arrive are carrion flies (Diptera), colonising dead animals within minutes due to their acute sense of smell. Beetles, such as carrion beetles (Coleoptera: Silphidae) and rove beetles (Coleoptera: Staphylinidae) are the next group of invertebrates to arrive. Both beetles and flies lay their eggs on the carcass and their offspring (grubs and larvae respectively) feed on the decaying flesh. Other beetles may then visit the carcass to feed on fly larvae, and so we can see that multiple trophic levels are involved in this food web.

When larger vertebrates feed on the carrion they commonly scavenge larger pieces of tissue. They obtain nutritional value from this, use it for respiration and excrete the remainder. The nutrients are then cycled back into the environment via their faeces. The vertebrate decomposers, such as vultures, often eat and distribute other tissues that invertebrates and microbes struggle to break down, such as cartilage, bone and hair. Vultures are an organism of conservation concern globally. Scientists at the University of York are looking into how vultures move, feed, and how they can affect communities of bacteria. By investigating how these factors interact we can understand how vultures shape disease transmission in their environment, and also how their movements affect the threats they face.

These examples show us how the movement of animals, whether aquatic or terrestrial, is a key component of nutrient cycles. Furthermore, we can see that the conservation of large animals and scavengers must be an important focus in order to allow for the efficient transfer of nutrients through natural systems.