Find out more
Home / Healthcare & Medicine / Agriculture / The Resistant Mosquito: Staying Ahead of the Game in the Fight against Malaria / Theory of selection, evolution and spread

Theory of selection, evolution and spread

While these are critical, it is equally important to understand the ultimate causes of resistance: how do resistant mosquitoes spread through the population after they emerged? After all, if we understand this process, we can think of ways to prevent or reduce its evolution.

Let’s first define evolution. Evolution is the change in allele frequencies over time. There are different mechanisms by which evolution could occur and a common misconception is that mosquitoes might ‘learn’ to become resistant or intentionally ‘seek’ for mutations when exposed to insecticides. This is false. Insecticide resistance evolves through adaptive evolution by natural selection. We will break this process down in two main components: mutations and selection (Figure 1 below).

Mutations are the fuel of evolution. Without mutations, there is no variation, and without variation, there can be no natural selection. Mutations occur, by and large, randomly in the genome as a result of errors in DNA replication or repair. These mutations are most often harmful, or at best neutral, but sometimes they have a beneficial effect, such as when the mutation confers resistance to insecticides. Such mutations could be single nucleotide changes in a specific gene, but they could also be larger changes such as gene duplications or deletions.

Mutations are extremely rare events, with estimates being as low as one in 100 million on any given location in the genome. You might wonder why resistance could be such a problem if mutations are so rare. The reason for this is twofold.

First, there are many mosquitoes in the population, and these mosquitoes have a relatively short generation time. Compare it to your chance of winning the lottery. If you buy just one ticket, that chance is extremely low. However, if you buy hundreds of thousands of tickets every month (about the generation time of a mosquito), your chances will go way up.

Second, mutations are only the first step; selection will lead to this mutant multiplying within the population. Often though, mosquito populations don’t have to wait for new mutants to emerge and the existing standing variation is sufficient for selection to act upon. This could be the case when resistance has already been selected for by another insecticide and the resistance mechanism provides cross-resistance to the novel insecticide, or when previously neutral mutations, or mutations with other functions, now lead to resistance to the insecticide.

Natural selection results from a process whereby organisms which are better adapted to their environment tend to produce more offspring. As a result, the next generation will contain more individuals descending from those better adapted parents. Over generations you can observe a certain phenotype, and thus its associated alleles, increase in frequency in the population.

To make this more concrete, let’s imagine two mosquitoes, one that carries the resistance alleles, the other the wild type, susceptible alleles. Both mosquitoes land on a mosquito net for their first blood meal. The resistant mosquito successfully feeds through the net and flies to the wall to digest the blood. The susceptible mosquito dies within minutes of touching the insecticide-treated bed net. The resistant mosquito lays her eggs a few days later leading to a hundred resistant offspring. The susceptible mosquito was never able to have any offspring. As you can see in this simple scenario, the frequency of resistance rapidly increased within one generation.

For instance, it has been shown that resistant mosquitoes may produce fewer offspring, have lower mating success, or lower energy reserves. These fitness costs could be the result of the mutations that impact the normal function of the gene, or as a result of an upregulation of resistance associated enzymes, which require extra resources to overproduce. This is what we call a fitness trade-off: resistance is beneficial when insecticides are around, but it could lead to a lower fitness in the absence of insecticides.

It is hypothesised that mosquitoes may evolve compensatory mutations that limit these fitness costs. We observe this in other organisms such as antibiotic-resistant bacteria. However, such evidence in insects is scarce and whether this occurs for mosquitoes is still an outstanding question. 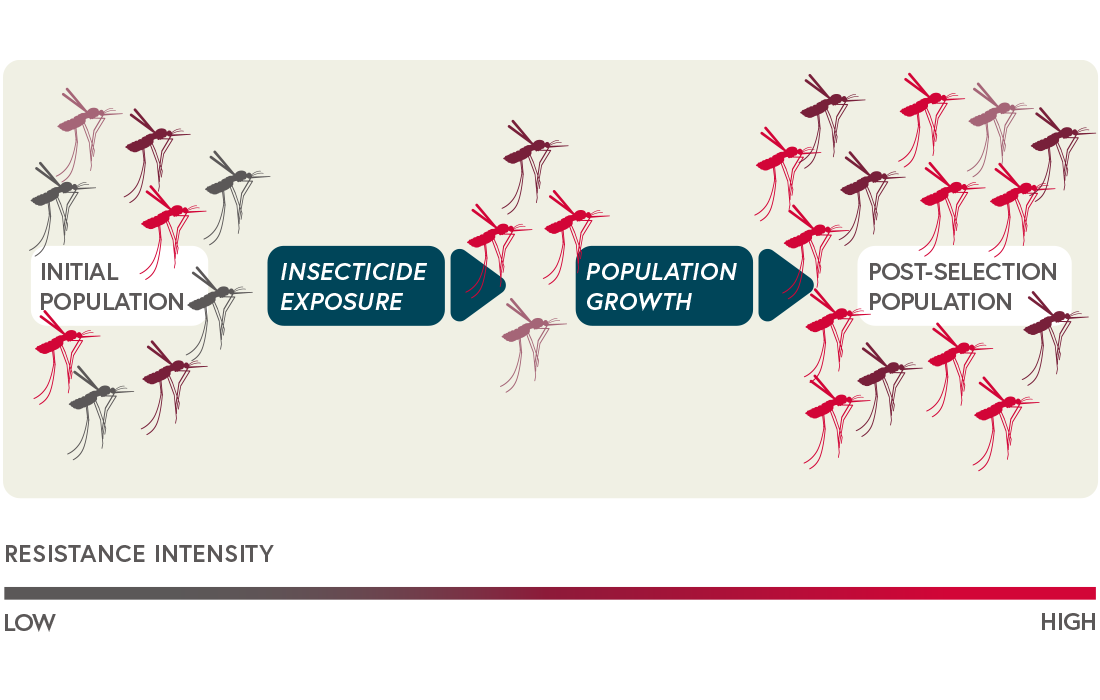