Earlier on, you had a closer look at the water cycle in the Mediterranean region. In this video and the associated article here, you will learn about the different carbon cycles and their importance to Earth’s climate.

As part of the way Earth works as a system, carbon is continuously passed between the ocean, the land and the atmosphere. This involves a range of different processes, some of which can be observed by satellites. Human activity is disturbing these natural processes and causing a rise in atmospheric carbon dioxide. Satellites and ESA’s Climate Change Initiative are helping to improve our understanding of the carbon cycle and its role in climate change. Source, ESA

The global carbon cycle is the process by which carbon is exchanged within and between the atmosphere, land, and ocean (Houghton, 2003). Any shift in the carbon cycle that causes carbon to be transferred from one reservoir to another causes more carbon to be stored in the other reservoirs. In other words, carbon is continuously exchanged between various ecosystems and the atmosphere. Therefore, to better understand the carbon cycle, understanding carbon sinks and sources and processes leading to carbon sequestration is essential.

Sinks of carbon are natural (e.g., plant, ocean and soil) or artificial (e.g., landfills, carbon capture and storage) reservoirs that accumulate and absorb more carbon than they release. In contrast, carbon sources are those that release more carbon than they absorb into the atmosphere through natural (e.g., volcanic eruptions) or artificial (e.g., burning fossil fuels) processes. Carbon sequestration refers to the process of capturing and storing carbon dioxide (CO2). Carbon sequestration can be classified into three types, namely geological, biological and technological. 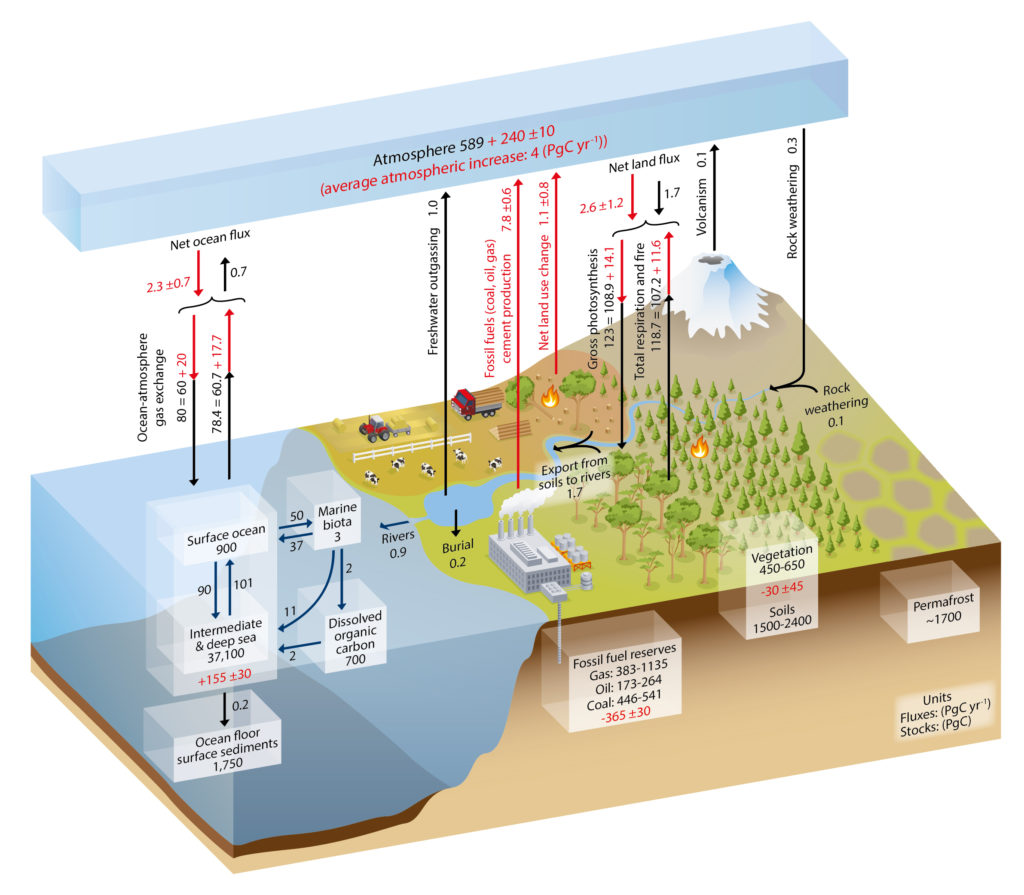 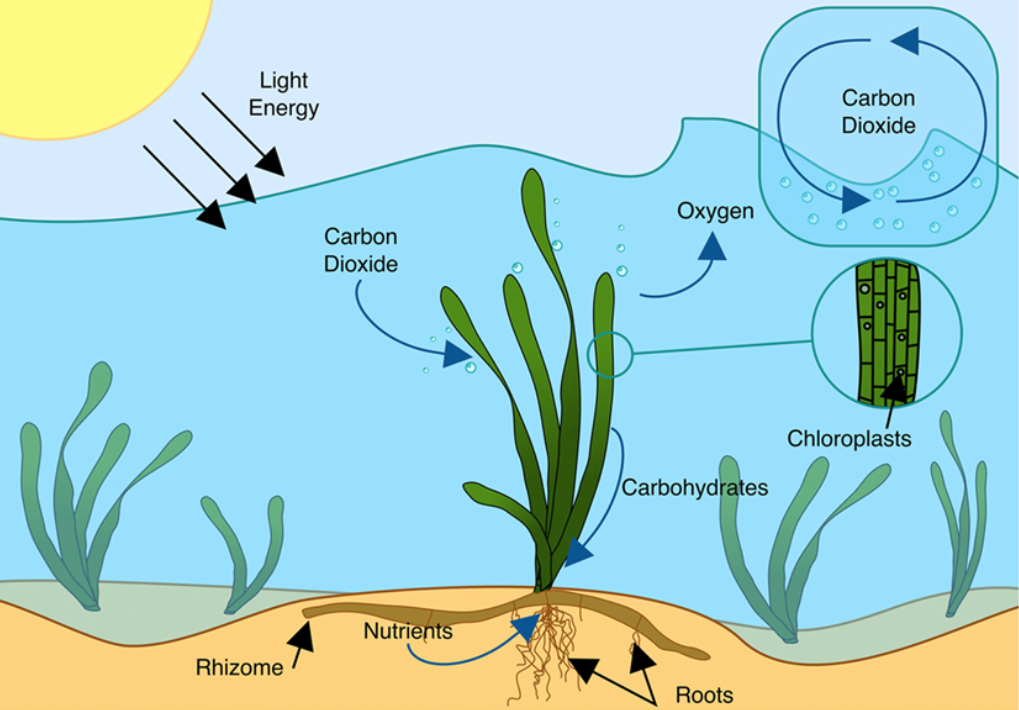 Figure 2: Carbon uptake and photosynthesis in a seagrass meadow, also applicable to land vegetation. By Cullen-Unsworth L, Jones B, Lilley R and Unsworth R, CC BY 4.0. (Click to expand)

Nature tends to balance CO2 by absorbing it through photosynthesis and returning it to the atmosphere via respiration. For example, Figure (3) shows the overall perturbation of the global carbon cycle caused by anthropogenic activities, averaged globally for the decade 2009–2018 (Friedlingstein et al., 2019) 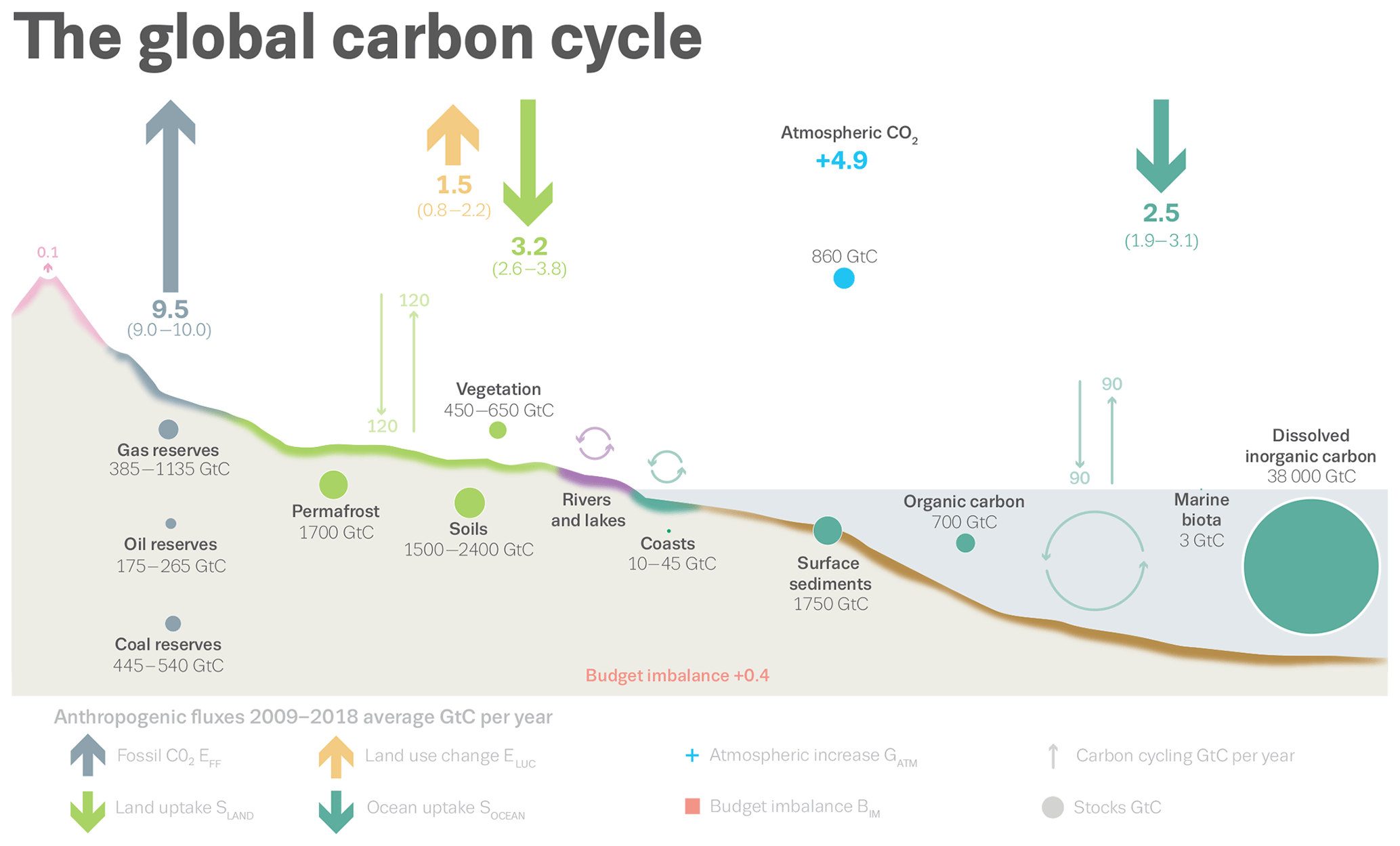 Congratulations! You have reached the end of this activity. In the next activity, we will introduce the concept of climate change and how the climate is described. We will start by reviewing what climate change is and which variables are considered essential to characterise the Earth’s climate.