Practicalities of vector control methods – Insecticide use and spraying

This step explains which and how insecticides are used to control sand fly populations. 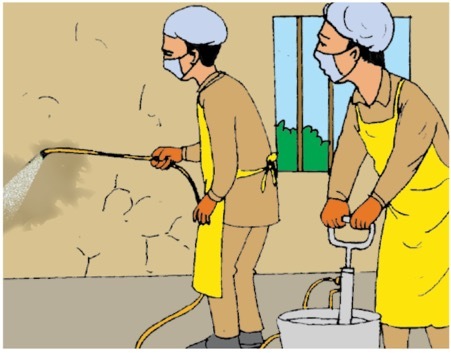 How are insecticides used to control sand fly populations? In this step, we identify practical resources which can be read or watched about the implementation of a spraying regime. Note that many of the currently available resources and guides focus on mosquito control, and whilst there is much cross-over to sand fly control, the different biology of these insects must be considered when devising spraying protocols. It is generally thought that sand fly larval control is impractical, therefore most efforts focus on combating the adult (female) sand fly.

Which insecticides to use?

The insecticide of choice had been DDT[1] (dichlorodiphenyltrichloroethane) until the 1960s. However, given widespread resistance, this is no longer used. Alternatives include synthetic pyrethroids such as deltamethrin, permethrin, and propoxur. Other substances, such as neem oil, citronella, linalool and geraniol have also been used as repellents or spatial sprays and with varying degrees of effectiveness.

When selecting and using insecticides the source and quality of the insecticide, and deep awareness about possible emergence of insecticide resistance are of paramount importance. The overall ease and feasibility of preparation and use of the insecticide must also be considered. To ensure maximum effect, the correct preparation of the insecticidal mixture must follow the manufacturer’s instructions closely. Insecticides are synthetic chemicals and as such are likely to require specific storage and transport conditions as well as careful formulation, use and disposal. Suboptimal storage conditions of insecticides have been a main challenge to successful sparing campaigns in the past.

The aim of IRS is to leave a relatively long-lasting insecticidal residue on the inside surfaces of walls and ceilings of most homes in a community. It is strictly used for species that rest inside dwelling (indoor resting species) that will come in contact with the sprayed surface. Spraying should be in a standardized frequently yearly, depending upon the sand fly ecology. Stirrup pumps, or more recently compressor pumps, are used and spraying onto the surfaces is carried out in a methodical way to ensure optimal coverage. Parameters such as the distance of the spraying to the wall or surface being sprayed, or the height of area being covered by the spray, or the regularity of spraying are crucial for the good IRS practice. Optimally, as a measure of quality control of IRS, the amount of insecticide that can be found on a sprayed surface should be tested. Kits that enable this type of testing are commercially available.1 Quality assurance must be done by national control programs, using standardized methods. Crucial for the success of IRS are acceptability by the local population, sustainability and completeness (full coverage).

There are a number of training aids2, including “how to” videos3, which detail best practice for IRS. Most of available videos are centred on mosquito control but similar principles apply to sand fly control as well.

It is important to note that using IRS is not necessarily the best tool everywhere. There are several studies that have questioned the effectiveness of IRS, showing that it has little impact on VL transmission[2, 3]. Also, not all species of sand fly rest indoors. When the vector is exophilic like P. orientalis in East Africa, employing IRS is of no use.

Similarly, even if IRS is done, human behavior can also play a role. For example, sleeping outside in the summer when it gets too hot indoors, means that humans may still get exposed to infected sand flies which feed outdoors (exophilic). Thus again performing indoor residuals spraying will again have little impact[4, 5]. Long-term IRS may also influence sand fly behaviour by driving them to feed more outside as has been shown for mosquitoes[6] .