Some key thoughts by VL expert Dr Pradeep Das in this interview about VL surveillance action in India.
View transcript
12.4
DR PRADEEP DAS: Surveillance in kala-azar is one of the very important aspects. Unless we do the clear and correct surveillance, you cannot come to know the exact disease burden, the first thing. The second thing is for elimination, surveillance is the most important thing. So for surveillance right now, passive surveillance is going on. And many times, this is active surveillance - 15 days in a year, we do the active surveillance. But in my opinion, the surveillance should be done throughout the year until we are reaching the goal of elimination. Why I am saying that? Because if a case is there in the village, what will happen, it can spread that disease.
69.9
So what will happen, the time he will reach the hospital, by that time he has already infected several people. So the surveillance is the most important thing as far as disease control, as far as elimination is concerned.
94.4
Reporting is done in Indian setting in PHCs. The cases are reported, they have been reported in PHCs, in primary health care centre. From there, it goes to the district health centre, and from district to the state health, so like that and then from there to the government of India. So suppose your surveillance is done in a correct way, so the correct reporting will be done in case of PHCs after PHCs, things can be done in an easy way to the government system.
143.6
There could be two possibilities. One is if the reporting is not done, it will be under-reporting. If it is double reported in two places, suppose a patient has been seen over here or is reported in one PHC, but he is taking drug treatment in other PHC, there will be a double reporting. So in that way, the exact load or exact number will not be the same so that will make a lot of problems. Why a lot of problems? Because once the treatment regimen or the total load of the patient, the numbers of patients, your micro-planning or IRS for that particular village, practically for that particular household, it will be changed.
201.1
So that is very important, that the correct surveillance and correct reporting has to be done.
211.6
So we need to have some good technology or good techniques by which we can do the good surveillance. For that, we need to have the index approach. What is the index approach? It’s if we come to know one case– so around to that particular house, if we can think about 50 more houses which have been infected by the time this particular case has been detected, that way, if we do the index approach, 50 houses towards the whole circumference, we may get more number of cases. WHO, in their R-TAG meeting, (regional technical advisory group meeting), they have decided that, as the numbers are coming down, we should use a different approach.
263.2
Other approaches is, first is your house-to-house survey, camp approach, snowballing, or your incentive approach. The thing is we cannot use one single approach in one place because the geographic conditions, the other things, are very different. The administration is also different. The government is very sensitive about it for elimination and they have now, their incentive has increased. The CM of Bihar has given 6,600 . rupees, that is equivalent to your $100. On top of that, the government of India is giving 500 rupees, that is again enough of an amount, that will be for their wages lost so that has changed. With the help of the government, things have changed.
321.1
Now, once they are detected as real cases, they are immediately coming to the PHCs or to the CSCs or district hospital and medical college. They are treated very fast. The impact of one day treatment has changed the whole scenario, single dose AmBisome. With the help of that, it means people are now one day treatment, the next day they can go home and they can start their work. Now, the patients are going towards the hospitals or to the PHCs for their treatment, which was not earlier because people don’t have the trust in the government system. Now, they have that trust.

In this step, Dr Pradeep Das, Director of RMRIMS a specialised hospital and research centre for the treatment of VL in one of the most highly endemic areas for VL in the world, talks to us about the importance and types of surveillance currently used within the national VL control program in India. He highlights how VL surveillance approaches might require revision and adaptation in response to how the disease is spreading and control activties are progressing.

One of the approaches used particularly during elimination when cases might decrease, is called the “index approach”, and it involves actively looking for new potential VL cases near a reported case. The selection criterion to distinguish which households to survey and which not, is the proximity to the case (remember that proximity is a known risk factor and VL is a focal disease) – either by specifying a radius around the case, or by specified number of households nearby, also illutrsated in the figure below. 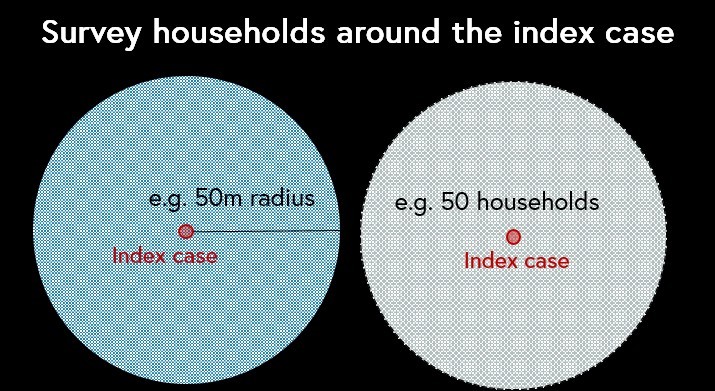 Dr Das also refers to other sections that we will target in the rest of this week. One of those core themes is the partnership that underlies the Indian national VL control program, as well as need for political/ governmental engagement to strengthen national health systems and build trust between control activities, health professionals and communities of patients affected by VL.