Skip main navigation
Home / Nature & Environment / Sustainability / Bioeconomy: How Renewable Resources Can Help the Future of Our Planet / The Problem of Algal Blooms

The Problem of Algal Blooms

The term ‘algae’ refers to a group of organisms that are capable of producing oxygen through photosynthesis (using the sun’s energy to make food in the form of glucose). Rapid increases in the growth of certain types of microalgae create toxic conditions in oceans and lakes known as ‘algal blooms’. 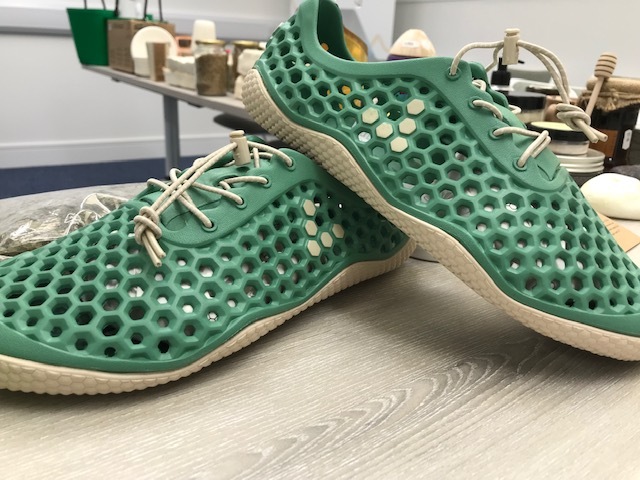 Most training shoes are made from petrochemical-derived plastics. They’re designed to become obsolete once you’ve run 450-500 miles in them and they’re difficult to recycle due to the way they’re made and the different combinations of materials used in their construction. In fact, the more you think about it, trainers don’t seem to have much going for them in terms of green credentials. However, there is one company that has managed to turn a serious environmental problem into a commercial product that literally makes footwear green.

The Problem of Algal Blooms

The term ‘algae’ refers to a group of organisms that are capable of producing oxygen through photosynthesis (using the sun’s energy to make food in the form of glucose). Rapid increases in the growth of certain types of microalgae create toxic conditions in oceans and lakes known as ‘algal blooms’. These blooms occur when fertilizers containing nitrogen and phosphorus are flushed by rain into the water causing the algae to grow rapidly. As the algae blooms on the surface of the water, sunlight is prevented from reaching other plants, causing them to die and depleting oxygen in the water.

As the dead plants in the water decompose, this further reduces the levels of oxygen in the water leading to death of the ecosystem – where oxygen levels reach a point where life cannot be sustained and fish and other organisms die. These algal blooms can be significant in terms of the impact on human health. In 2014, for example, a bloom in Lake Erie poisoned the Toledo, Ohio water system, connected to over half a million people.

How Can We Solve Algal Blooms?

From Algae to Foam

Once it is removed from the water, there are many potential uses for the algae. A technology company, Algix, dry algae using thermal energy, process it from a granule to a fine powder, and blend it with polymers to make their product (Bloom Foam). This material can then be used to manufacture products such as the Vivobarefoot Ultra III Bloom shoe, which is described as “the world’s first plant-based, high performance solution to synthetic and petroleum-based flexible foams”.

As well as an alternative to ecologically harmful petrochemical foams, this foam is lightweight and waterproof. According to Vivobarefoot every pair helps to re-circulate 57 gallons of filtered water back into natural habitats and prevents the equivalent of 40 balloons of carbon dioxide being released into the atmosphere.

The Bloom Foam can also be used to manufacture other products such as backpacks and yoga mats and, at the time of writing, Bloom claim to have cleaned 745,755,453 litres of water and 467,301,798 cubic metres of air producing their materials. Although the foam is unfortunately not biodegradable, Vivobarefoot encourage consumers to return their shoes to them for repair and resale, with this work being carried out in Yorkshire!

What advantages do Vivobarefoot shoes made using Bloom Foam have over other types of footware in terms of renewability and sustainability? Write your answers below.

Phycology, or the scientific study of algae is helping us to understand the potential and opportunities algae can offer. From using algae to brew beer, treat disease and make biofuels, there’s lots of interesting information out there to explore. There’s even a podcast all about algae.

GENIALG is an industry-driven project designing high-yielding seaweed cultivation systems and increasing the production of two species of European seaweed.

Feeding cows a few ounces of seaweed daily could sharply reduce their contribution to climate change.