Watch this video, covering how we imagine translation in relation to space.
View transcript
2
Good morning everybody. My name is Shirin Ramzanali Fazel. I was born in Mogadishu Somalia. My father is Pakistani, my mother is Somali. My dad grew up in Kenya so he was speaking English and Swahili and Urdu because of his Pakistani background, and when he came to Somalia he had to study in his own way - self made you know - he was going around with his small dictionary Italian English to speak to other people because people in Somalia were speaking only Italian not English. And when he met my mother so that was the language with which they were communicating. And my mum she didn’t go to school.
41
Her Italian was picked up from you know just conversations so that was the Italian ‘maccheronico’ that I grew up with. So in this instance Italian was the language of love? Yes, yes of love. And they were communicating in that language but my mom was speaking in Somali with me, but my dad unfortunately didn’t speak in Urdu with me or in Swahili or because he wanted to improve his own Italian, and he didn’t learn in Somali also, because his way of learning a language was from the grammar. And Somali was an oral language so he could never fit.
75.3
He said - oh every time you’re changing you know the way you put the sentence, there is no grammar and it’s not written I cannot learn it, but he could understand. Thank you so much, I am Nelson Mlambo and I am originally from Zimbabwe where we are rich linguistically, our repertoire, and I have been working in the Namibia for the past nine years, and it is quite enjoyable working there especially when you look at how the multilingual landscape is like. And I am Aurelie Zannier Wahengo, so I’m a French national and I started to work in Namibia in - oh 14 years ago already, and I’m lecturing French at the Namibian University.
120.1
You just said you know you come from Zimbabwe which is a very multilingual country. You both work in Namibia which is another very multilingual country. So what languages do you speak it now do you use them in your everyday life? Well there is the social life and the private life, and also the professional life and you’ll find that English is the lingua franca and it is good to speak English whilst at the same time when we are at home, the children for example, my daughter she is doing Afrikaans at school, she’s doing French at school, and in addition to that she is also learning our own language at home.
158
And you will be impressed when you hear her prey in our own mother tongue. You say this is quite brilliant and when she goes back home how fluent she is trying to be within our mother language. Which one is your mother tongue? My mother tongue is Shona. Even though she could speak one or two words in Ndebele which is almost close to Zulu. And yeah in my case also, so French of course because I’m teaching French. English of course also. At home it’s also different because my husband is Namibian so is speaking Oshiwambo. We’ve got two kids so at home, it’s multilingual. I speak in French to my kids. He does teach them Oshiwambo, and we are also using English.
206.9
Is there anything that you only ever do in one language? I’m still talking about your personal life. Is there anything that only ever comes out in one language? Not at all. No. I think we are so multilingual so that even when you want to explain this certain concepts, certain aspects, you discover that you are free to use a specific language and not the other one even for me to use English for example to explain certain things, I discovered that I go back to my own mother tongue, because it is easier for the other person to understand it better. I’m still counting in French.

We often imagine translation as a link between two distinct locations. One of the most common metaphors of translation is that of a bridge connecting two islands, where the islands are two separate languages, two cultures, and possibly two national spaces.The drawing below traces a personal map of languages and cultures. It is inspired by pictures drawn by many students over the years when asked to produce a graphic image of their own experience of languages and translation. The drawing uses islands and ‘bridges’ as visual representations of translation understood as a way of connecting places and people. 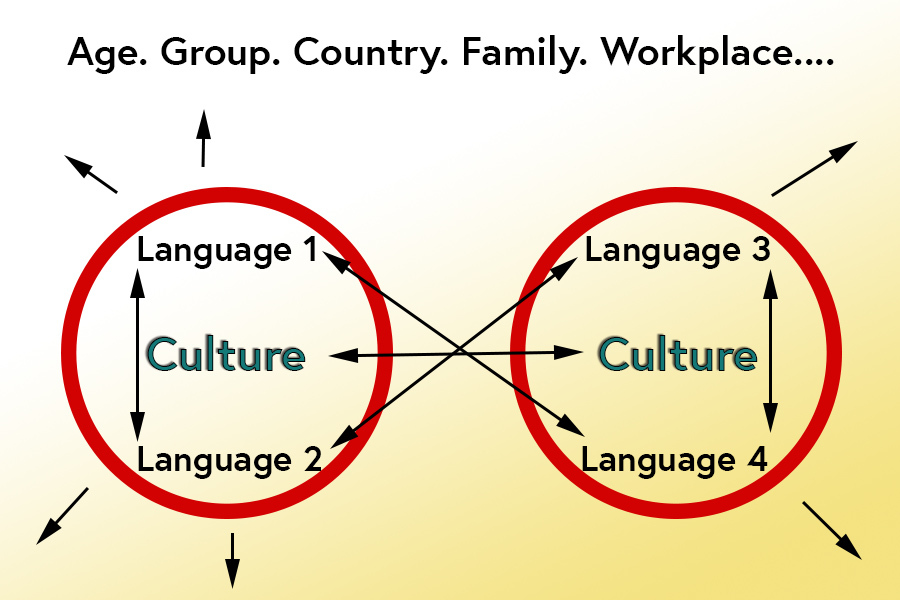 This is indeed one role which translation can play, but, as we have seen when discussing linguistic landscapes, translation can also be found within one location where multiple languages co-exist, clash, overlap or are creatively mixed.Whether within one place (for instance, the public spaces of a city) or across distinct cultural boundaries (as in the case of global awareness-raising campaigns such as those for human rights), translation can be used to bring people together, but also to divide them.One of the things we learn from translation practice is that ‘cultures’ or communities are not homogeneous: different ‘native speakers’ speak different variants of their language (or sociolects) which are affected by factors such as class, education, age, gender, or sexual orientation. When negotiating between different communities of native speakers and different languages, those factors remain important.

View Course
In the video for this section, a number of professionals speak about their own language repertoires – the languages they know and how, where and when they use them.They are Shirin Ramzanali Fazel, a writer of Somali origins who publishes both in Italian and in English; and two of our course tutors: Aurelie Zannier and Nelson Mlambo. They describe very complex patterns of language learning, language proficiency and language use, both in their personal and their professional lives.

Hi there! We hope you're enjoying our article: How we imagine translation
This article is part of our course: Working with Translation: Theory and Practice