In this article we cover the 2nd case study examining visual and verbal language in Museums and exhibitions.
© Cardiff University

The image below, taken from the catalogue of an exhibition on polyphonic poetry, displays multiple languages: the photograph mixes visual and verbal codes. And the text underneath adds further layers of signification, providing the text in three languages: Danish, German, and English.

There is no explicit information about translation anywhere in sight, yet the presence of the Danish text in the photograph and the fact that it comes before German and English in the following text, indicates that Danish is the original language of the poem. The information at the bottom of the page, though, is only in German, reflecting the fact that this trilingual text is part of a volume (and before that of an exhibition) associated with Berlin. 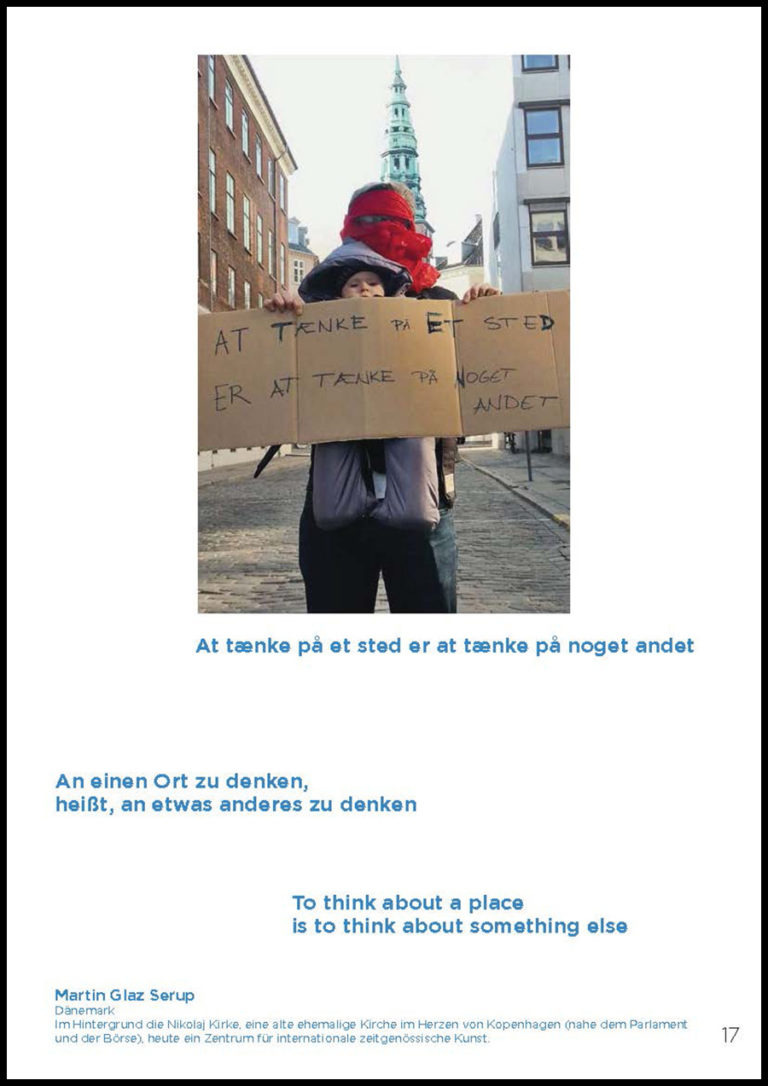 Here is the information about the exhibition, in English translation: once again, there is no indication that this is a translation – yet the fact that we have seen the page with the Danish poem makes us think that this is most probably the case:

Photo exhibition: “WHAT’S THE POINT OF POETRY? A European polyphony. On show.” Created according to an idea of Sergey Shabohin

Poets constantly find themselves confronted by the question – ‘What’s the point of poetry?’ and having to justify what they do. This exhibition explores that question and tries to find fundamental answers for each country individually by collecting the viewpoints and position statements of 47 poets from 47 European countries. It documents the ways in which poets assess the state of culture and society in their countries, also providing an answer to the question – what does poetry communicate, what messages and demands do the poets involved have for their societies, and what does the idea of ‘home’ mean to each of them?

The answers are at the same time a demonstration and an act of solidarity. We want the photo exhibition project ‘What’s the point of poetry’ to provoke a wide-ranging international discussion to be conducted in every country, in every society. After opening in Berlin, the exhibition will be going on tour. The initiator, Sergey Shabohin (born in Minsk in 1984); is an artist and curator, and is co-founder and chief editor of the www.artaktivist.org art portal for modern Belarusian art. Sergey Shabohin is regarded as the engine of the younger generation of Belarusian artists.

The Photo exhibition: “What’s the point of poetry? A European polyphony. On show“ is a project of the Literaturwerkstatt Berlin, now Haus für Poesie. initiated with the generous support of the Hauptstadtkulturfonds as a part of the poesiefestival berlin 2013. ]