Founding of the UN: A fresh start

This article discusses how the end of WW2 brought about the founding of the UN, with an ambition to save the next generations from war.
© University of Glasgow

World War Two was very different from World War One. Yet in one respect, it prompted a similar response: a new world organisation would be set up.

The new organisation was the United Nations Organization, or UN. Its founding document laid out an ambition to save ‘succeeding generations from the scourge of war, which twice in our lifetime has brought untold sorrow to mankind’. It was established on the basis of the UN Charter, an international treaty signed on 26 June 1945 at the end of a two-month conference in San Francisco, which today binds 193 member States.

The circumstances of the UN’s establishment are as intriguing as those surrounding the creation of the League of Nations; but they are a story for another day (and, perhaps, another course). For present purposes, what matters are the differences and similarities between the two acts of creation. Three points seem particularly relevant:

First, it was clear from the early stages of World War Two that there would be another new world organisation. Even before the attack on Pearl Harbour, the leaders of the United States and the United Kingdom agreed on the Atlantic Charter, a document that formulated guiding principles of their wartime effort, including the renunciation of war and a commitment to economic and humanitarian cooperation.

These principles were adopted by all Allied Powers, and as planning began for the post-War order, it became clear that they would need to be integrated in some institutional framework – a framework that would not be a super-State but a universal organisation established by sovereign member States. In the Moscow Declaration of October 1943, the main Allied powers said as much when emphasizing ‘the necessity of establishing at the earliest practicable date a general international organization, based on the principle of the sovereign equality of all peace-loving states, and open to membership by all such states, large and small, for the maintenance of international peace and security’.

Indeed, as Northedge notes, ‘when the victor Powers began to reorganise the world in 1945 …, they had no doubt that something similar to the League of Nations must be formed again’ (Northedge, The League of Nations, 278). At the same time, it was beyond doubt that the new framework would be formally separate from the old League of Nations, which was widely considered to have failed in its central purpose. What is more, two States leading the Allied coalition – the United States and the Soviet Union – had never been fully integrated into it, and thus could hardly be expected to argue for institutional continuity. The fresh start required a new framework, and old models had to be cast aside.

Frank Moorhouse’s Edith trilogy (to which we have referred in the first week of this course) illustrates the point very well: it describes how high-ranking League officials travel to San Francisco, for the conference establishing the United Nations. Expecting to be called upon for advice, they find themselves ignored. Instead of a ‘proper place’ amidst the great powers, one seat is allocated to them in the auditorium, away from the delegations. ‘I don’t understand’, says Edith, bitterly (at the end of book 2, Dark Palace), ‘How did we become the enemy?’ 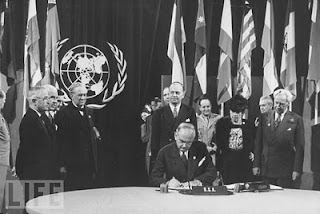 Yet as with many fresh starts, there was more room for continuity below the surface. Once the UN took up its work, it did draw on the League’s expertise and assets: it took over League property and buildings, it revived old League agencies in the social and economic sectors, and it ended up hiring many ‘old League hands’ (Mazower, Governing the World, 213).

2) From war-time coalition to world organisation

Second, just like the League of Nations in 1919, so the UN in 1945 grew out of a war-time alliance. Its guiding principles were agreed between the major Allied powers; and when 26 Allied nations endorsed the Atlantic Charter, they did so in the ‘Declaration of United Nations’. The world organisation’s war-time legacy is perhaps brought out most clearly in President Truman’s announcement of 8 May 1945, noting that ‘the forces of Germany have surrendered to the United Nations’.

This could be felt in 1945. When the San Francisco conference opened, Hitler was still alive (if only for a few more days); and when it ended, it would be another six weeks until Hiroshima and Nagasaki. The Axis powers were not invited and would only gradually join the world organisation. (The two German States remained outside until 1973.)

Just as in 1919, a ‘great organizational enterprise [was] dependent upon a great war to demonstrate [its] urgent necessity’ (Claude, Swords into Plowshares, 49). However, in some ways, the peacemakers of 1945 had learned a lesson. They did not tie the new project to the settlement of the war. The Charter was a self-standing treaty, not (like the Covenant of the League) part of a peace treaty. In that respect, the UN in 1945 was off to a ‘fresher’ start than the League in 1919.

Third, compared to the League of Nations, the establishment of the UN was planned in rather more detail. Just as in 1918/1919, the drafters could draw on private studies and proposals. However, unlike in 1919, the actual conference of San Francisco, at which the UN Charter was finalised, was preceded by detailed discussions among the major powers. Notably, in the autumn of 1944, British and American delegations met with Soviet and Chinese government officials at Dumbarton Oaks outside Washington D.C. (China, then still governed by the government of Chiang Kai-shek, had been elevated to ‘great power status’ to prepare for a major role in East Asia after a Japanese defeat.)

Further deliberations between the major powers resulted in a near-complete text that served as the key reference document at the San Francisco Conference. This text anticipated the main institutional structure of the new organisation. And it also contained what would later be called the ‘cornerstone’ of the new international order: a general ban on military force in inter-State relations, which should henceforth only be used in self-defence or with the UN’s mandate. 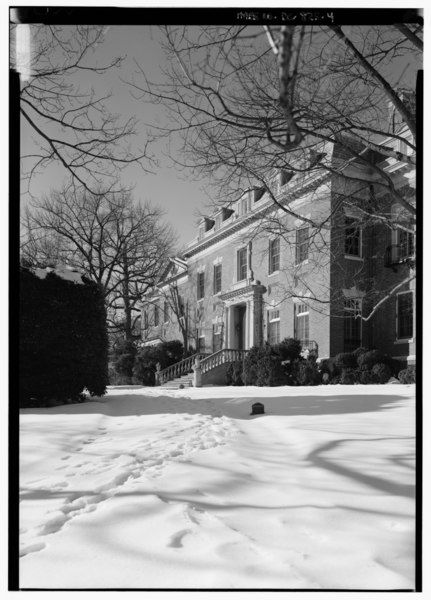 All this meant that the new world organisation, more so than the League, would be dominated by the major powers. And this was deliberate. The war-time experience suggested that in order to preserve world order, the major powers needed to act in concert. In Franklin D. Roosevelt’s oft-quoted terminology, peace and security were to be preserved by the ‘four policemen’. (France was granted the same status in 1945, to make it five.) And with great responsibilities would come enhanced membership rights: ‘the great powers were keenly aware of their corporate indispensability and were inclined to make the most of it’ (Claude, Swords into Plowshares, 62).

Well-prepared by a ‘Global Executive Committee’ of the great powers (Claude, 62), the Charter that was adopted on 26 June 1945 would reflect their special status. And this time, the Americans would remain ‘on board’. Carried by a large majority approval and supported by a ‘massive marketing blitz’ (Mazower, Governing the World, 208), the Charter sailed through the US Congress. Unlike in 1919, all of the main victorious powers would join the new world organisation.

The Charter that entered into force in October 1945 formulated the key goals of the new organisation. Like its predecessor, the UN’s central aim was to preserve peace and security. Like the League’s founders, the Charter’s drafters were mindful of the need to look beyond military security. The United Nations therefore continued and expanded the League of Nations’ work in the allegedly ‘technical’ fields of international cooperation – which occupied a prominent place in the new Charter scheme. And while the League Covenant had been couched in the language of inter-State diplomacy, the UN Charter began to embrace the language of individual rights.

The UN Charter’s Preamble reflects these partly complementary, and partly competing, aims. Now nearing its 70th birthday, it has remained a striking illustration of the inspiring power of language. (For a dramatic – perhaps too dramatic – rendition by Sir Laurence Olivier, listen into the UN multimedia website.)

We, the Peoples of the United Nations:

and for these ends:

have resolved to combine our efforts to accomplish these aims.

The fresh start clearly did not lack in ambition.