In this article Dr Sarah Stewart will describe one of the ways in which the evil forces tried to destroy the infant Zarathushtra. 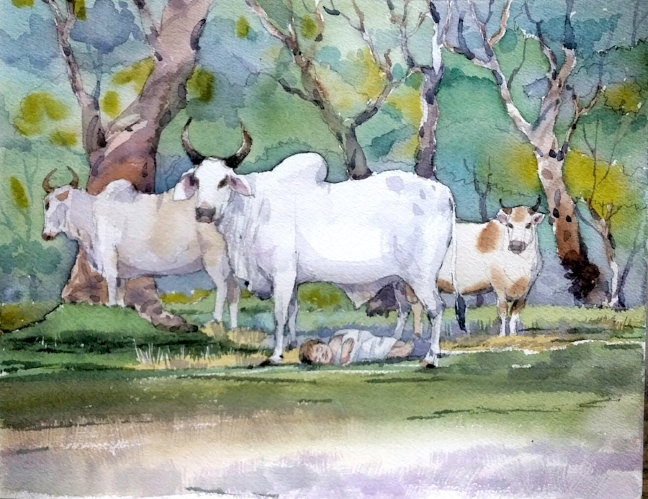 Following on from the previous step, we will look at some of the miracles or myths surrounding Zarathushtra’s birth. These are contained in the Pahlavi books and further elaborated upon in later, popular accounts. Remember, the Pahlavi books were compiled in the 9th century CE but draw on material from the earlier Avestan texts. We have scant information about Zarathushtra in the Avesta but know from the Gathas that he was from the Spitaman family and his parents were called Purushasp and Dugdov. The name Zarathushtra has been translated as ‘he who has old camels’, Pourushaspa ‘possessing gray horses’ and Dugdov ‘one who has milked, or milkmaid’. So these names denote a nomadic/pastoralist existence. 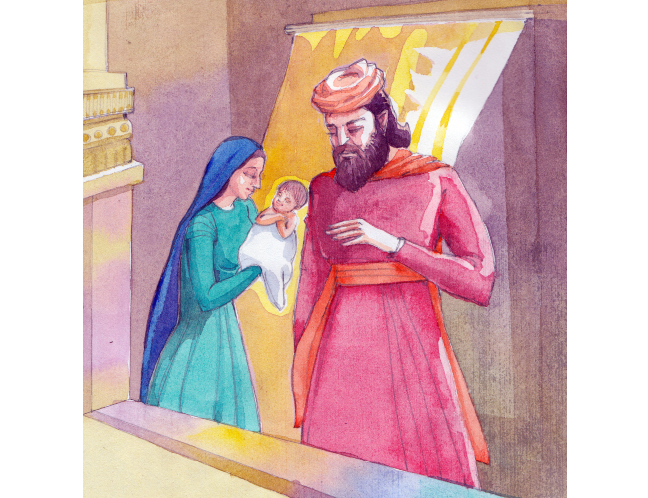 Watercolour painting of baby Zarathushtra with his parents [image courtesy of Meher Bhesania (2018), Zarathushtra and the Origins of Zoroastrianism: Exploring the Historical, Social, Cultural and Economic Legacy]

The details of Zarathushtra’s birth, childhood, adolescence and the conversion of his first followers, King Vishtaspa and Queen Hutaosā are contained in the later literature. The miracles of Zarathushtra’s birth and childhood are recounted in the Pahlavi Denkard where it says that instead of crying, he laughed at birth and the whole of creation rejoiced. The evil forces, daeva, realising that the arrival of Zarathushtra in the world meant their ultimate defeat, tried to destroy the infant in various ways. He was placed by a wicked priest, karb, in the path of a herd of cattle only to be protected by one who stood over him. He was variously laid in the path of horses, a den of wolves and thrown into the embers of a fire but each time escaped death through divine intervention.

You can read the account as told in the Denkard to give you a sense of the ‘primary’ source:
Denkard 7, ch. 3

(8) It is revealed that by sorcery the karb Durasrab so implanted in Purushasp’s mind fear of Zardusht, and so destroyed Purushasp’s understanding, that from fear he of his own accord consulted the karb about killing Zardusht … (9) the karb growled that the way was to kindle fire, so that he would be burnt with the wood. (10) But lo, a great miracle was manifest to many, as the Religion says: the fire did not spread to the brushwood, the fire did not take hold of the brushwood. At dawn his mother ran, seeking her son, and came to him …, and took him on her right arm …

(11) It is revealed that Purushasp then spoke to the karb Durasrab about the fire not burning Zardusht, and asked again how to kill him. The karb growled to Purushasp that the way was to lay Zardusht on a narrow path so that cattle would trample him underfoot. And Purushasp did this. (12) And a great miracle was thus manifest to many, as the Religion says: a bull came along who was the leader, fierce and big as an elephant. It ran to him. The whole day long it took pity on him, keeping the other cattle away from him. It was the first come, the last to go. At dawn his mother ran, seeking her son, and came to him …, and took him on her right arm.

As Zarathushtra grew up, stories were told of his wisdom and dedication, qualities that were to characterise his mission in adulthood. According to later tradition, Zarathushtra received his first revelation at the age of thirty. This event is alluded to in the Gathas (Y. 43) and described in a Pahlavi text, which describes his encounter with the Amesha Spenta, Vohu Manah, ‘Good Thought’ on the bank of the river Daiti where he had gone to fetch water for the haoma ceremony [see step 2.1].

Vohu Manah, ‘in the shape of a man, fair, bright and radiant … wore a garment like silk … which was as light itself’, led Zarathushtra to Ahura Mazdā and five of the Amesha Spentas, Divine Immortals, from whom he received his first instruction in the religion.

Following this encounter, Zarathushtra started to preach his new message but was rebuffed by the ruling priests, karapans who rejected his teachings. He went on to debate his beliefs with the priestly entourage of King Vishtaspa. They feared that he would usurp their position in court and had him thrown into prison. But hearing that the king’s horse was paralysed, Zarathushtra offered to restore it to full health on the condition that the king accept the new religion and its teachings. King Vishtaspa and Queen Hutaosā were Zarathushtra’s first influential converts (the first being his own cousin) and his teachings were finally disseminated under the king’s rule. At the age of 77, Zarathushtra was stabbed and killed by a priest of the old religion while performing a religious ritual. 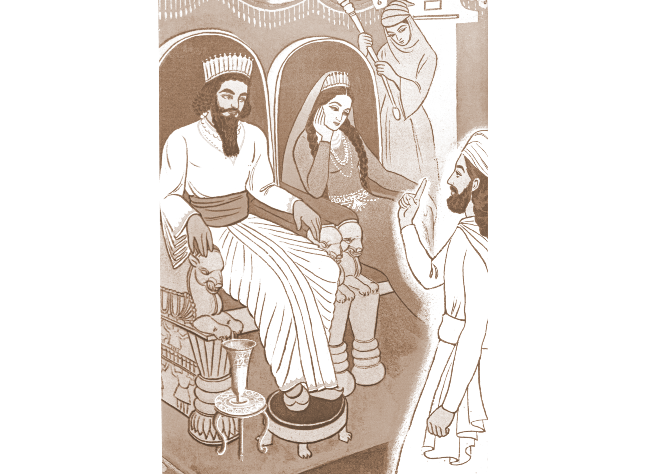 Zarathushtra explaining his religion to King Vishtaspa and Queen Hutaosā [image courtesy of Meher Bhesania (2018), Zarathushtra and the Origins of Zoroastrianism: Exploring the Historical, Social, Cultural and Economic Legacy]

Now that you have read a primary source, it would be good to know whether or not you think this helps you to learn about the topic of Zarathushtra’s birth. With reference to our discussion on mythology in the previous step (1.6), think about whether or not the Denkard account brings to life what you have learned so far about Zarathushtra, or whether it adds little to you understanding. Share your thoughts in the comments section below.