Find out more
Home How the Philippines deals with typhoons
Published on November 17th, 2021

In this article, we take a look at how typhoons are formed and why the Philippines is prone to typhoons, along with a case study of the strongest typhoon in the Philippines. 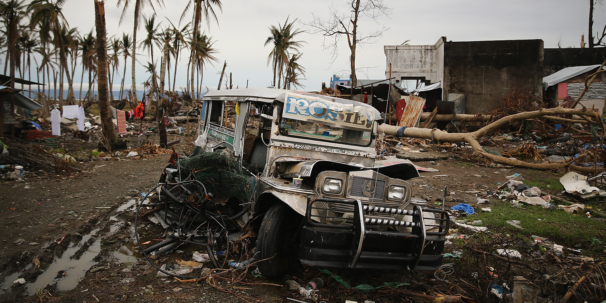 The Philippines is a typhoon-prone country that deals with 20 typhoons per year on average. The worst was super typhoon Haiyan, which killed an estimated 10,000 people and displaced millions. The number of typhoons is set to increase as the issues brought about by climate change become more pronounced.

In this article, we look at how typhoons form, the destruction they cause, and how the Philippines deals with typhoons.

What are typhoons – and how do typhoons form?

Hurricanes, cyclones, and typhoons are all types of storms that spin and are fuelled by warm air. Strong winds and a lot of rain accompany these storms. They form over warm waters, gaining energy as warm air absorbs water and rises. When warm ocean air rises, it cools, causing clouds to develop. This is referred to as a high-pressure zone.

There is a lot less air near to the water surface as this air rises. This is referred to as a low-pressure zone. More air rushes in to fill the void created by the low pressure. This causes a spinning cycle as air moves in to fill that area as it heats and rises. More clouds form as the heated air continues to climb and cool.

What is the life cycle of a typhoon?

Typhoons become more powerful when they pass over the ocean, as the air above the warm water fuels their motion. The typhoon is replenished by new air as it heats and rises. This causes the storm to cycle, causing the typhoon to intensify as it moves through warm water.

Typhoons lose intensity when they reach land because they are no longer travelling over warm water and hence have run out of ‘fuel.’ As they lose their intensity, they can still do significant damage with strong winds and rain.

Why is the Philippines prone to typhoons?

The Philippines is located just above the equator and faces the western Pacific, with little else to absorb the energy of storms before they hit land. Storms are fuelled by the warm, tropical waters, which produce roughly 20 typhoons each year. The Philippines has the world’s hottest ocean temperatures – frequently above 28°C, the minimum temperature for typhoon formation. This is set to increase with climate change, increasing the frequency of typhoons.

Why do typhoons cause so much damage in the Philippines?

In the Philippines, many people live on low-lying coastal islands, with coastal zones accounting for more than 60% of the population. In some regions, storm surges from Super Typhoon Haiyan surpassed 7 metres. Those waves rolled over low-lying areas of populous islands like Leyte, which is home to Tacloban, a coastal city where an estimated 10,000 people died.

While the Philippines has gained international recognition in recent years for its rapid economic growth, it remains an extremely impoverished country, with roughly 40% of the people living on less than $2 per day. The country’s unemployment rate is high, and agriculture employs almost a third of the workforce, making them especially vulnerable to harsh weather.

Only 20% of the roads in the country are paved. The severity of typhoons is further compounded by hastily constructed homes and poor evacuation procedures.

Mudslides have resulted in many casualties in previous typhoons. Hillsides that have been stripped of their trees have fewer roots to hold them together, which might result in mudslides if they are hit by heavy rainfall.

Super Typhoon Haiyan, the strongest typhoon in the Philippines

Typhoon Haiyan was a tropical cyclone that hit the Philippines in November 2013, causing widespread devastation in Southeast Asia. With winds of 313 km/h, it was one of the most powerful tropical cyclones ever recorded. Rainfall totalled 281.9 mm in some parts, with majority of it falling in less than 12 hours. Waves up to 7 metres high battered the coast.

The effect of Super Typhoon Haiyan

The course of Typhoon Haiyan across the Philippines was disastrous. Violent winds and a storm surge hit Guiuan, inflicting massive damage and hundreds of casualties. The storm’s strength increased as it approached Tacloban, with storm waves of up to 6 metres hurling boats inland, wrecking buildings, and sweeping debris and people out to sea. Thousands of people are said to have died as a result of the destruction of the city.

Although estimates for the eventual mortality count varied up to 10,000 or more, the official toll for those killed or missing was around 8,000 two months after the disaster. By the end of the first week following the typhoon, the Philippine government reported that more than 800,000 people had been relocated and that 8.7 million people had been affected in some manner by the storm.

However, as relief efforts began, the official estimates grew to almost 4 million displaced people and over 16 million people affected in total. Furthermore, over a million homes were claimed to have been damaged, with around half of them being entirely destroyed.

How the Philippines dealt with Typhoon Haiyan

Despite the severe loss of life, the situation could have been far worse if PAGASA, the Philippines’ meteorological service, had not intervened. It sent warnings two days before Typhoon Haiyan struck, resulting in the evacuation of nearly 750,000 people.

A number of charities provided humanitarian aid, as well as water, food, and shelter. In the long term, they will help individuals and families back on their feet by repairing fishing boats and donating rice seeds.

How the Philippines has adapted to typhoons since Typhoon Haiyan

Haiyan was a sobering example of how climate change is an urgent issue in the Philippines. Tropical cyclones are expected to grow more severe as a result of global warming, with higher wind speeds and heavier rains. Evidently, climate change solutions are needed, and fast.

The focus has switched to disaster preparedness – a challenging job, given the millions of Filipinos who live in fragile wooden houses in coastal regions. While the rebuilding has been quick, the process of making the country more resilient has taken longer.

The lessons of Haiyan are being applied to the reconstruction of large public buildings in Tacloban. New schools have metal grills on windows; reinforced concrete beams and bolts in the ceiling allow the roof to flex in high winds without ripping away.

However, a significant portion of housing remains extremely vulnerable. Some have been reconstructed in the same manner as before on former ‘no build zones,’ originally established after the typhoon.

Ideally, people would migrate inland, away from storm surges, into solid typhoon-resistant homes. However, fishing is a source of income for many Filipinos. Aid organisations, led by the United Nations, are assisting in income diversification and highlighting how sustainability can help mitigate natural disasters.

For example, progress has been made on the restoration of coastal mangroves, which will serve as a vital buffer in the event of the next major typhoon.

People who are in the line of typhoons have been warned and evacuated using the procedures set in place. As a result, residents are more reactive to the warnings given out by weather agencies, and there is cooperation between the villages to deal with the worst-case scenario when it occurs.

However, many people become far more vulnerable in the aftermath of disasters than before them. With the focus on reconstructing coastal areas, displaced people are forced to live in NGO-built temporary shelters because they cannot afford permanent, sturdy structures that would withstand severe winds and floods. Although each Filipino province sets aside 5% of its budget for disaster preparedness, emergency shelter remains scarce, despite the national government’s efforts to improve planning rather than simply react after the event.

The Philippines faces numerous obstacles in its efforts to mitigate typhoon damage – underdevelopment, a coastal population and poverty. However, steps are being made in the right direction.

FutureLearn offers courses on tackling environmental challenges and disaster management, arming you with the knowledge to assist in aid efforts and tackle further crises as they arise.