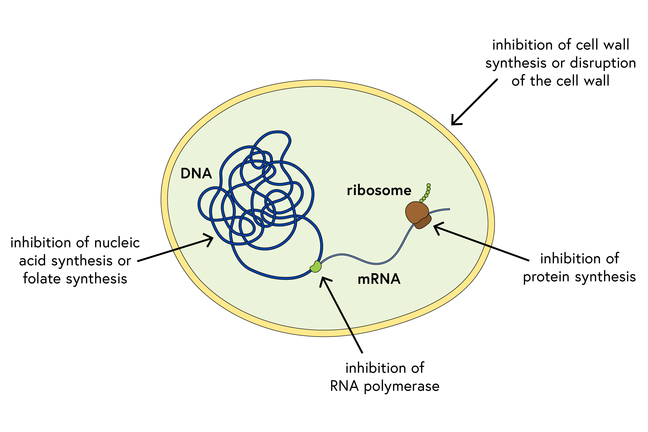 You have a bacterial infection and are prescribed an antibiotic by a doctor. Within a few days you begin to feel better. But how do antibiotics work?

Although these broad groups are useful for classification purposes, different antibiotics work in different ways to affect these processes and structures.

Penicillin was the first broad spectrum antibiotic to be discovered. Penicillin is part of the family of antibiotics known as β-lactams (beta-lactam). β-lactam antibiotics are so called because they all share common chemical structure known as a β-lactam ring. β-lactam family includes the penicillins, cephalosporins and carbapenems - which are some of the clinically most important antibiotics.

Another family of antibiotics known as the glycopeptides which includes vancomycin (an important antibiotic used for treating infections resistant to β-lactams) also prevent the cell wall forming by inhibiting peptidoglycan synthesis.

Three families of antibiotics prevent DNA synthesis though different mechanisms. Sulfamethoxazole (of the Sulfonamide family - the first real antibiotics) and Trimethoprim both block the activity of enzymes that are involved in the synthesis of folic acid. Without folic acid the bacteria are unable to synthesise the DNA bases (A, T, C, G).

Rifampicin (an important antibiotic for the treatment of tuberculosis) works by binding to RNA polymerase, an enzyme which copies DNA into RNA. RNA is then used as the template to synthesise proteins in the ribosome. By blocking the RNA polymerase, rifampicin stops the bacteria producing proteins which are essential for life.

Many families of antibiotics including the aminoglycosides, tetracyclines, macrolides, phenicols, and lincosamides work by binding to parts of the bacterial ribosome blocking its activity. The ribosome is the machinery that reads the RNA template and synthesises proteins (known as translation) by linking together different amino acids. Other antibiotics such as mupirocin and fusidic acid work by interfering with other bacterial enzymes that work with the ribosome during translation.

Why do you think antibiotics target such essential processes?