0:05Skip to 0 minutes and 5 seconds Hello, my name is Adrian Brink. I’m a clinical microbiologist from Johannesburg, and I’d like to share with you a specific antimicrobial stewardship programme that we’ve been involved in. In South Africa, we don’t have enough infectious disease resources, neither microbiologists in all hospitals. We also don’t have ID pharms or clinical pharmacists in every hospital, so we had to use existing resources to embed an initial, basic stewardship programme, a sustainable one, in all of the hospitals that participated in this programme. So we chose a prospective audit pharmacist, non-specialised, pharmacist driven audit and feedback strategy to implement across 47 rural and urban hospitals.

1:02Skip to 1 minute and 2 seconds The interventions that the pharmacists chose, or that we chose for the pharmacist, were so-called low hanging fruit, implying that there are easy, obtainable interventions without ID resources. They were, for example, duration of therapy longer than seven days, duration of therapy longer than 14 days, a redundant cover, many doctors don’t know overlapping spectra between gram negative and gram positive antibiotics. We also did an intervention to make sure that cultures were taken prior to empirical therapy, for example.

1:45Skip to 1 minute and 45 seconds The target was these five low hanging fruit and every pharmacist then were allocated stewardship time from their daily activities to go to the wards and ICUs and to measure patients more than seven days of therapy, 14 days, et cetera, intervene, and discuss that with a doctor to reduce overall consumption, which was the aim of the study. The model that we used for improvement amongst the non-ID pharms was the Breakthrough Series Collaborative, which you’re going to learn about later. It involved six weekly or two monthly teleconferences with all the pharmacists in the so-called PDSA cycles, which you’re also going to learn of.

2:38Skip to 2 minutes and 38 seconds Overall, the five interventions over a two year period led to a 12.5% reduction in overall consumption in these 47 hospitals.

As in the example from Nigeria, in South Africa resources and staff are limited.

In this video Dr Adrian Brink explains how they used existing resources to embed an initial, basic , sustainable stewardship programme in 47 rural and urban hospitals that participated in their programme.

This video is taken from “Antimicrobial Stewardship: Managing Antibiotic Resistance” a 6-week course developed by BSAC and the University of Dundee, Scotland. 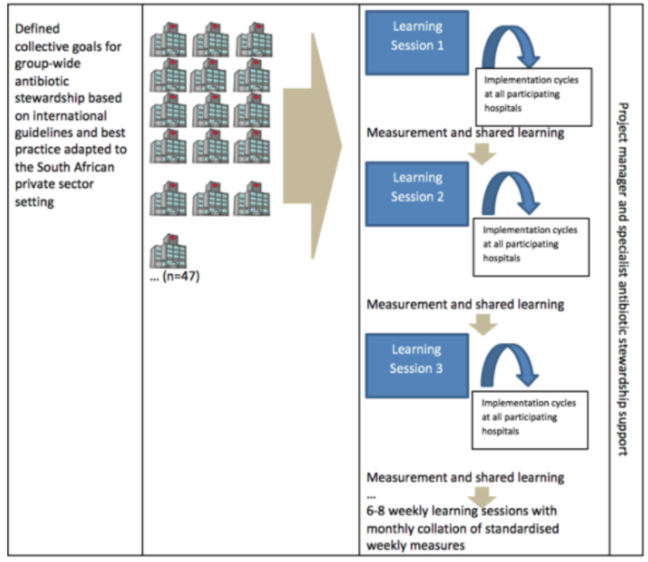 After you have watched the video:

Please view the full article mentioned in the video here.