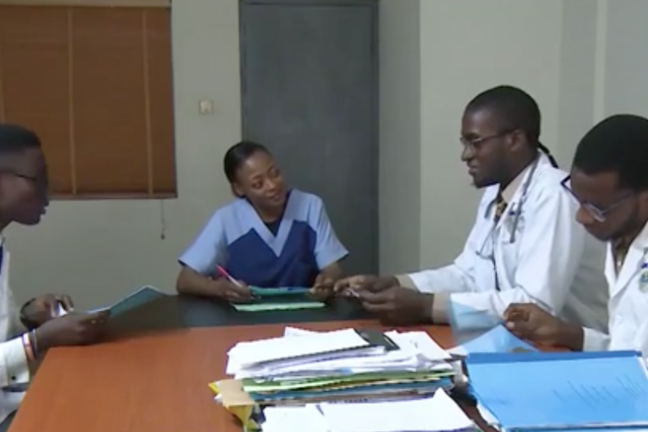 “He was given pain killers and an antibiotic”

The first question in prescribing an antibiotic should be ‘does this patient have a bacterial infection that requires treatment?’ Anote had experienced blunt trauma to the abdomen, making splenic rupture or damage to the other organs or GI tract most likely. A surgical assessment was warranted and antibiotics should not have been dispensed from the pharmacy. This illustrates the common use of antibiotics over the counter (OTC), without evidence for a bacterial infection needing to be treated.

“was taken to a nearby hospital”

Once in the hospital the same issues apply, but now Anote may have had access to a surgeon who could have assessed him properly.

Furthermore, there is no record of a blood culture being taken prior to antibiotics, which may have helped in defining a bacteraemia and choice of antibiotics

Language is important in antibiotic stewardship. We need to be completely clear about the indication for an antibiotic, which may be prescribed as

The rupture of a gastrointestinal viscus will spill GI contents into the abdominal cavity. This is an indication for broad spectrum antibiotics as ‘preventative treatment’, i.e., there is not yet an established infection causing sepsis, but the probability of infection is so high, that a short course of antibiotics are given to prevent infection occurring. As a broad spectrum of bacteria (Gram positive, negative and anaerobes) is expected, an equally broad-spectrum antibiotic which would cover community bacteria. Either amoxicillin-clavulanate or ceftriaxone+metronidazole would be good choices. Duration would depend on the clinical course.

“Catheterisation in line with protocol”

Catheterisation should be avoided whenever possible. In the first 24-48 hours of critical illness where fluid balance is being strictly recorded and changes responded to, this is acceptable. However indwelling catheters in men who do not have obstruction should be switched to a condom-catheter at the first opportunity or not be placed at all outside of critical illness. The continued need for an indwelling catheter should be performed on a daily basis and catheters removed as soon as possible.

“But none of the samples sent to the laboratory”

It is unclear from the available information, whether Anote continued to exhibit signs of sepsis. The lack of blood cultures and cultures of other potential infected fluids is a missed opportunity. Serial procalcitonin (PCT) has been used in high income settings to direct cessation of antibiotic therapy once the PCT reduces below 80% of the maximum or becomes ‘negative’. However, this is an expensive test and may be less available in resource-limited settings.

There is no clinical indication for the use of antibiotics in patients from so called ‘dirty environments’ This only causes collateral damage of increasing bacterial resistance and side effects from the antibiotic.

Sample collection from wounds is an important part of management of chronic wound infection, yet the manner of collection is important. The sending of peripheral wound swabs from the ICU or wards in this setting is likely to culture a large number of commensal skin bacteria that are unlikely to be the cause of the infection. We recommend patients with chronic wounds be taken to theatre, thoroughly debrided, washed out and then deep biopsies taken for culture.

This topic will be covered further in Week 2.