This content is taken from the University of Bergen & Bjerknes Centre for Climate Research's online course, Causes of Climate Change. Join the course to learn more.
View course
1.11

Carbon dioxide concentrations have risen by around 40% since the Industrial Revolution. Atmospheric mixing ratios for CO\(_2\) are now around 400 parts per million (ppm) compared to a pre‐industrial levels of 280 ppm. The global atmospheric CO\(_2\) budget is determined by several natural and anthropogenic sources and sinks (Table 1). The main ones are: 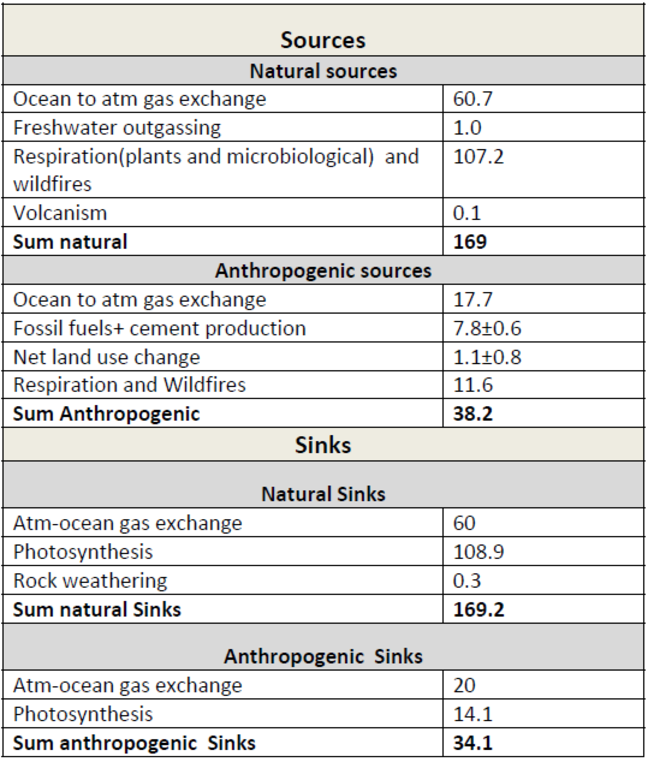 The global atmospheric CH\(_4\) budget is determined by several terrestrial and aquatic sources that can be broadly grouped into three categories:

* Biogenic: Biogenic sources contain CH\(_4\)‐generating microbes (methanogens), and consist of anaerobic environments such as natural wetlands and rice paddies, oxygenpoor freshwater reservoirs (such as dams), digestive systems of ruminants and termites, and organic waste deposits (such as manure, sewage and landfills).

* Thermogenic: CH\(_4\), formed over millions of years through geological processes, is a fossil fuel. It is vented from the subsurface into the atmosphere through natural features (such as terrestrial seeps, marine seeps and mud volcanoes), and through the exploitation of fossil fuels (coal, oil and natural gas).

* Pyrogenic: CH\(_4\) produced by the incomplete combustion of biomass and soil carbon during wildfires, and of biofuels and fossil fuels.

The sources are partly balanced primarily by one sink in the atmosphere: Oxidation of CH\(_4\) by hydroxyl radicals (OH), a process mainly taking place in the troposphere. This primary sink accounts for around 90% of the global CH\(_4\) sink. Additional oxidation sinks include oxidation in aerated soils (with oxygen) by methanotrophic bacterias, reactions with chlorine radicals and atomic oxygen radicals in the stratosphere, and reactions with chlorine radicals from sea salt in the marine boundary layer. 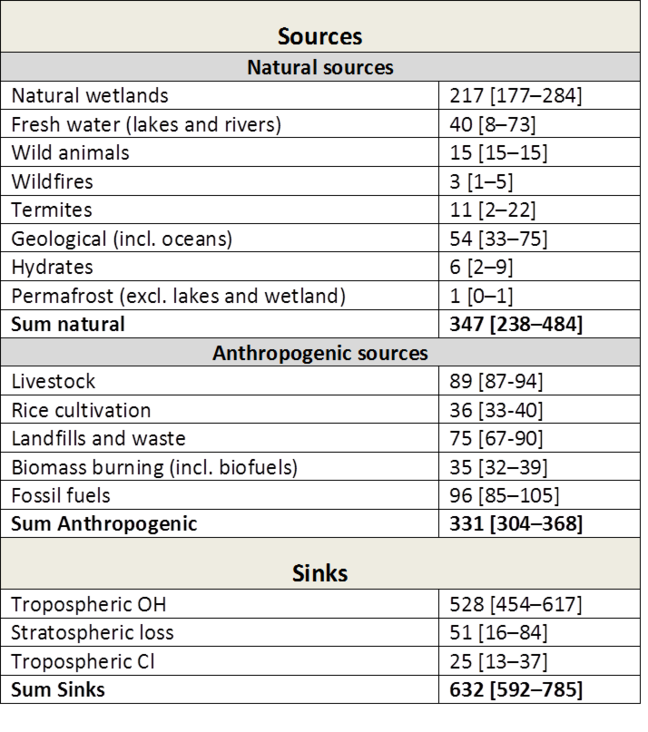 Table 2: Bottom‐up\(^1\) estimates of sinks and sources (2000‐2009) in Tg CH\(_4\)/yr. Numbers in square brackets represent minimum and maximum values in the literature. Taken from Kirschke et al. 2013. Note: The bottom‐up estimates cited here are around 20% larger than recent top‐down\(^2\) estimates. This is explained by a larger sum of natural emissions (from wetlands, freshwater, and geological sources) in the bottom up estimates.

\(^1\)The bottom‐up approach includes process‐based models estimating CH\(_4\) emissions, and CCMs estimating the OH sink. For wetland and wildfires CH\(_4\) emissions are parameterized with empirical knowledge of local processes and driven by global data sets of climate, or satellite‐observed burned area, to simulate CH\(_4\) fluxes. For anthropogenic sources emission inventories are often based on energy use, agricultural activity, and emission factors from different sectors. Three inventories for anthropogenic emissions are used in the above table.
\(^2\)Top‐down approaches are based on atmospheric inversion models, which determine ‘optimal’ surface fluxes that best fit atmospheric CH4 observations given an atmospheric transport model including chemistry, prior estimates of fluxes, and their uncertainties. Global atmospheric inversions provide a time‐varying distribution of CH\(_4\) fluxes, albeit with limited insight into the underlying processes when different sources overlap in the same region such as agricultural, waste and fossil emissions in densely populated areas.

Nitrous oxide is a powerful greenhouse gas produced both naturally and via human activities. Its concentration in the Earth’s atmosphere has risen by around 15% since the Industrial Revolution. Atmospheric mixing ratios for nitrous oxide now stand at around 315 parts per billion (ppb) compared to a pre‐industrial high of 275 ppb.
Nitrous Oxide is a greenhouse gas with an atmospheric lifetime of 118‐131 years. N\(_2\)O is a much more effective greenhouse gas than carbon dioxide having a Global Warming Potential of 298 over a 100‐year time span. This means that one kilogram (kg) of N\(_2\)O released into the atmosphere has a global warming effect equivalent to 298 kg of carbon dioxide over a 100 year period.

Natural sources of N\(_2\)O include emissions from the ocean, oxidation of ammonia in the atmosphere and from nitrogen in soils, particularly tropical soils:

* Soils under natural vegetation: The largest natural source of nitrous oxide is from soils under natural vegetation. Uncultivated soils make up the majority of the Earth’s land surface and the nitrous oxide produced by microbes that break down nitrogen in these soils are the main natural source of atmospheric \(N_2O\) (produces around 60% of natural emissions) . Riparian (close to water) and tropical rainforest soils are important contributors to this source because they have higher nutrient availability and moisture levels.

* Oceans: The oceans are believed to be one of the largest natural sources of \(N_2O\) emissions here \(N_2O\)is produced as an intermediate during microbial denitrification (reduction of \(NO_3\)– to \(N_2\)) and as well as a by‐product during nitrification (oxidation of \(NH_4^+\) to \(NO_3^-\)). For example denitrification by ingested bacteria in the anoxic animal gut or in and around sinking fecal pellets from zooplankton which provide the anaerobic conditions necessary for denitrification, a process which produces nitrous oxide as a by‐product.

* Synthetic fertilisers: The main source of anthropogenic Nitrous Oxide is use of synthetic fertiliser and manure applications which increase the production of \(N_2O\)in soils and sediments, via nitrification and denitrification pathways, leading to increased \(N_2O\) emissions to the atmosphere. Increased emissions occur not only in agricultural fields, but also in aquatic systems after leaching of fertilizers and runoff, and in natural soils and ocean surface waters as a result of atmospheric deposition of nitrogen originating from agriculture, fossil fuel combustion and industrial activities. Food production is likely responsible for 80% of the increase in atmospheric \(N_2O\), via the addition of nitrogen fertilisers.

The major sink for atmospheric \(N_2O\) is destruction in the stratosphere where the majority undergoes photolysis to \(N_2\) + O. The remaining \(N_2O\) reacts with O to produce NO, which can enter into a stratospheric ozone‐depleting reaction cycle. Thus, \(N_2O\) , like many halogencontaining gases, is important both as a greenhouse gas and as an ozone‐depleting substance. 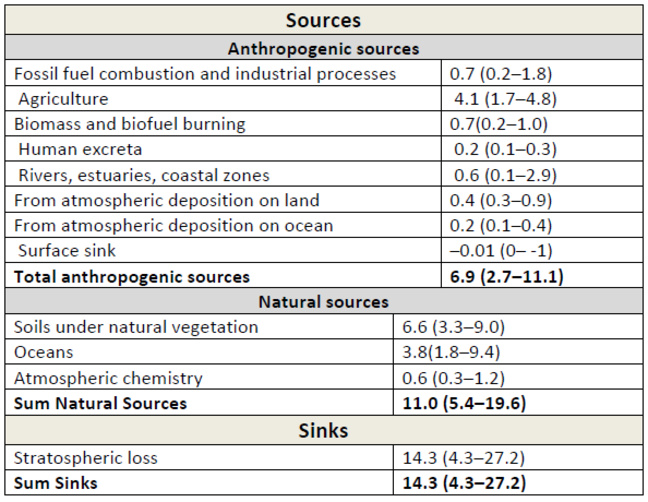 Emissions of carbon monoxide (CO) and volatile organic compounds (VOCs) lead to production of ozone on short time scales. By affecting OH and thereby the levels of CH4 they also initiate a positive long‐term ozone effect. CO has a lifetime of 2 to 3 months. The effects of VOCs via ozone and CH4 cause warming and the additional effects via interactions with aerosols and via the O\(_3\)–CO\(_2\) link increase the warming effect further.