This content is taken from the University of Reading's online course, Understanding Depression and Low Mood in Young People. Join the course to learn more.
View course
1.5

In this Step, we’ll be learning a little more about the developments that occur in the brain during adolescence. It can be helpful to learn about these changes because they provide some context to normal adolescent behaviour and why teenagers behave as they do.

As recently as 15 years ago, it was commonly assumed that most brain development occurs during infancy and early childhood, and that an adolescent brain was essentially ‘mature’. However, recent advances in technology, which help us to explore the structure and function of the brain, have led to a shift away from this thought.

The following TED talk ‘The Mysterious Workings of the Adolescent Brain’ by cognitive neuroscientist Dr Blakemore, explores changes that occur within the brain during adolescence. When watching this clip, think about the following questions:

Take a look below to see a summary of the video and how this research can help to explain ‘normal’ teenage behaviour.

Adolescence can be a difficult time for young people. Both physically and emotionally it marks a period of rapid change and teenagers may face all sorts of challenges, with friends, at school and in their home life. During this same period, the teenage brain is also in the process of maturing (it’s only around 80% mature, and doesn’t reach full maturity until around 25-30 years of age). Essentially it’s still ‘under construction’ with connections still developing between different areas of the brain.

We heard Dr Blakemore talk about two specific areas of the brain and how they develop during adolescence: 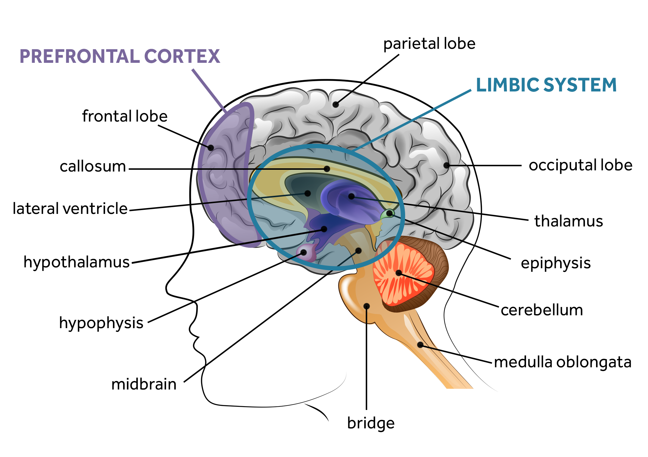 The prefrontal cortex is an area at the front of the brain which plays a vital role in activities such as decision making and planning, social interactions, understanding others and self, making judgements and impulse control (collectively known as executive function). During adolescence, this part of the brain is still being finely-tuned (connections are still being developed) and therefore teenagers simply find it harder to take into account someone else’s perspective to guide their behaviour.

We return to this topic later in the course to find out how key changes in teenagers’ brains impacts on their behaviours.

What did you take from this clip and summary article? Did they give you a better insight into ‘normal’ adolescent behaviour and why teenagers might behave as they do? Share your thoughts below.