This content is taken from the The Data Lab's online course, Driving Value from Data. Join the course to learn more.
View course
1.13

0:06Skip to 0 minutes and 6 secondsSo thanks for doing the exercise of working out where you would allocate your funding in terms of which value pot you are going for, so whether it's most on improved decision making improved operations, or a monetization. So if you were mostly in this space here, so if you are mostly thinking about improved decision making, this is a place where you want to see the data, and you want to make better decisions, you've probably got a dashboard in place. So this is about working out, where to start where to focus what's important for your organisation. If you're mostly in this space, probably tends to be coming from a lot of process heavy organisations and industry.

0:40Skip to 0 minutes and 40 secondsSo manufacturing, construction, not exclusively, but again, that's where the focus is I need to work out on improving my operations. What we find though, is that these two are quite set, symbiotic, in relationship. So once I have a dashboard and I see what's going on, it usually helps me identify something in my operations I want to improve and vice versa. If I'm focusing on an operation, how do I track that to make sure it's moving in the right direction, so decision making, so these two quite symbiotic together.

1:08Skip to 1 minute and 8 secondsIf you were mostly in the monetization space, probably you're already quite a data rich, data centric organisation, I would be saying like the big companies like Facebook, Amazon, Google, etc, that they are data companies at their heart. Most organisations are not those companies, though the exception being what we've seen anyway is like startups and scale ups that know they are data organisations at their very heart, so if you're in here, you know that you've got data and data is your business. If you're not in there, then what I would do is avoid falling in love with monetization. I've drawn it as a bag of money, but there's not a bag of money under your table.

1:45Skip to 1 minute and 45 secondsThere is a lot of responsibility as we discovered earlier about why monetization is not the first place to go because of how you get set up, who's going to actually pay for it? But it's okay actually to have nothing in here, as I say the majority of people we've seen have been in this improved decision making, improved operations. Picking a moving back and forward between the two.

As we saw in the video:

It may be worth you revisiting this at the end of the course to see if your views have changed.

Let’s use the workbooks to bring this alive. Based upon what has been discussed, take a moment to capture some ideas for your opportunities using the Data Value Canvas. 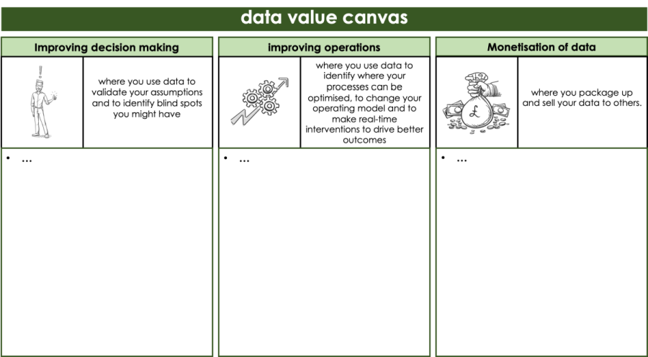 Again there are no right or wrong ideas at this stage - we will revisit these later in the course.

The big conversations in data (and Artificial Intelligence)

Meaningful and achievable steps - a view from Aggreko

Explore the basic concepts of networks and network security and the tools used by network engineers and attackers.

Our lives depend on online services. Gain essential cyber security knowledge and skills, to help protect your digital life.