This content is taken from the University of Birmingham's online course, Electrical Engineering: Sensing, Powering and Controlling. Join the course to learn more.
View course
2.7 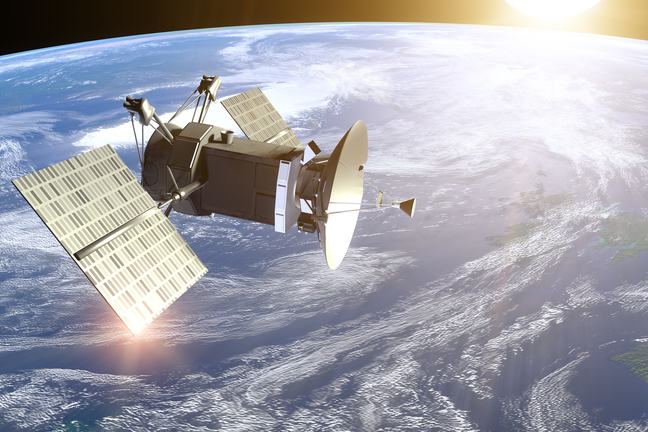 A satellite in orbit

Tools for the Job

Electrical and Electronic Engineering in Space

We’ll look at a satellite as a closed volume in space – an electrical system. The diagram below shows some of the inputs and outputs.

We’re going to consider a “CubeSat” [1, 2]. The CubeSat programme at NASA in the United States of America enables education and research institutions to conduct experiments in space from low cost miniature platforms also known as “nanosatellites”. The satellites are built from cubes about 10 cm on each side, with a volume of 1 litre and weighing less than 1.5 Kg. Up to 6 cubes can be stacked to make a single payload for launch. After its release into orbit, a satellite can begin transmissions are received at ground stations on Earth. A typical mission might last for 120 days, after which a satellite begins a fall into the atmosphere and is burned up by the heat of re-entry.

Imagine our mission is to transmit signals to a ground station on Earth. Researchers on Earth can analyse the received signals to determine the degradation due to processes taking place in the ionosphere, and thus learn about the impact of space weather on radio communications. In one such application [3] the transmissions were centred on a frequency of 450 MHz and have a bandwidth of 100 MHz. For this project, a three-unit cube satellite was chosen.

The “transmit signals” sub-system contains three components, a waveform generator, a power amplifier to create a signal of sufficient strength to be reliably detected at the base station, and an antenna. A power of 0.5 W was sufficient in [3]. A battery capacity of 30 WHr was shown by modelling of the solar power generation to assure the supply of sufficient electrical power. The antenna presents a particular challenge. Like the solar panels aboard Tiangong-2, the antenna must be folded away inside the satellite at launch and then deployed in orbit. You can see examples of trials of such systems in the videos with this week’s content, including the deployment of an inflatable conical antenna from a real space flight. The transmitter would send signals twice a day to allow two receiver locations to be operational, during three orbits of the Earth.

An undergraduate project out of this world!

The modelling of electrical power generation is a sophisticated task yet something that can be tackled in a research project by an undergraduate student. Such a project was undertaken by one of our students, Ade Adepegba, in 2015-16, for a 5x5x5 cm satellite.

It was found that if a polar orbit was chosen instead of an equatorial orbit, the satellite would spend less time in eclipse (in the Earth’s shadow), allowing power to be generated for a greater proportion of the orbit. The higher the orbit, the lower the atmospheric drag; this did not affect the generated power much but reduced the rate of tumbling. At higher altitude, there was again a reduction in eclipse time compared with a lower altitude.

The data from the second stage was used to simulate the power produced from the five solar panels. In what is called “hardware in the loop simulation”, the simulated orbit data was used to programme a power supply to deliver the predicted power to a dummy load and an energy storage device.

Each of the solar panels was expected to have a maximum power output of 25 mW. A maximum-power point tracking algorithm was implemented. In the simulations, an average output power of around 40 mW was predicted for the 50 minutes or so while the satellite was in sunlight, followed by no power generation while the satellite was in the Earth’s shadow. A complete orbit took around 100 minutes. Thus the total energy generated was of the order of 0.016 W-hours, or around 60 J.

Here’s an example of some of the output from the simulations. The left-hand column shows the orbit and the total output power, which drops to zero when the satellite is in the Earth’s shadow. 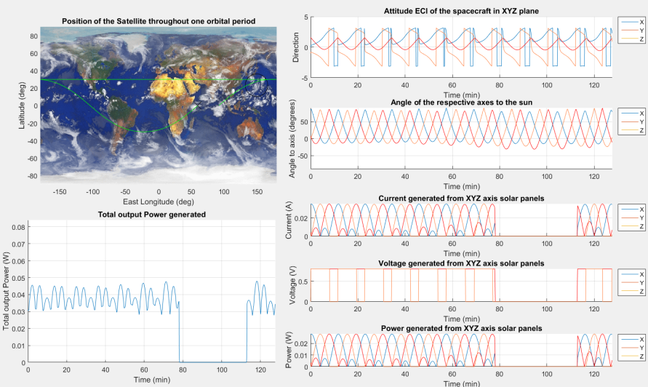 The first two graphs in the right hand column show the results of the models of the satellite’s orientation. The tumbling while in orbit is clear (we won’t try to define the co-ordinate systems used here, so don’t worry about the titles of the graphs). The lower three graphs shows the electrical power generated by the panels.

Our system diagram also shows the generation of heat. Losses in the electrical systems (remember Ohm’s law) means heat is generated in all electronic circuits. This could be radiated out into space (the space stations have radiators to do just that, using pressurised cryogenic liquids as the operating fluids). In the case of the CubeSat there is no room for this so instead the heat energy needs to be stored. You might have an idea how to use this, you might remember from Chemistry that some chemical reactions absorb heat (are endothermic) and that changes of phase of matter can also absorb heat. The greatest amounts of heat are generated in the transition from solid to liquid; so the heat can be absorbed in melting a solid substance. Phase change cooling is also available in clothing [4].

It is clear that Electrical and Electronic Engineering in space is a complex business, with many challenges that aren’t present on Earth. Some of them are though. You may know that advanced solar electricity farms employ rotation of the panels to catch the sun, mechanisms to mitigate against heating of the panels in the sun and maximum power point tracking control systems. You will also see that like most Engineering challenges, success requires a multi-disciplinary approach.

In modelling the power generation on a satellite, our student had to make use of knowledge generated by Physicists and Mechanical Engineers to make his project realistic. That’s why it is important to at least have an understanding of general scientific concepts as well as of mathematical methods in order to be successful in Electronic and Electrical Engineering. It is also helpful to be studying alongside Engineers from other disciplines, so that you develop experience of making the most of others’ expertise.