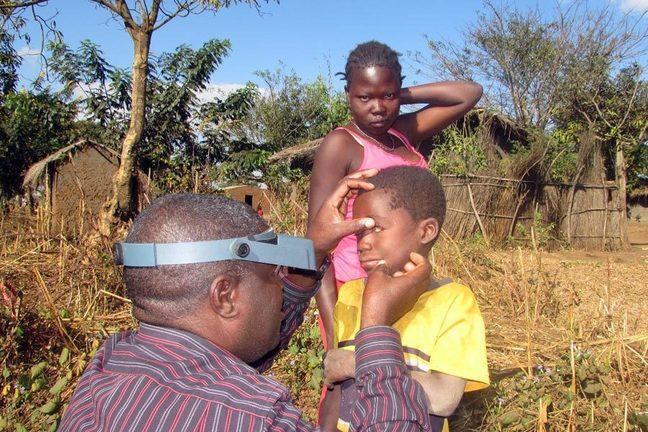 Trachoma in Malawi: from mapping to action plan

Dr Khumbo Kalua, Trachoma Technical Advisor for the Malawi Ministry of Health, reports on progress towards elimination of trachoma in Malawi, a densely populated country in southern Africa with 16 million inhabitants.

Using the opportunity provided by the Global Trachoma Mapping Project (GTMP) the Malawi Ministry of Health decided to map 25 districts suspected of being trachoma-endemic.

The mapping survey aimed to: 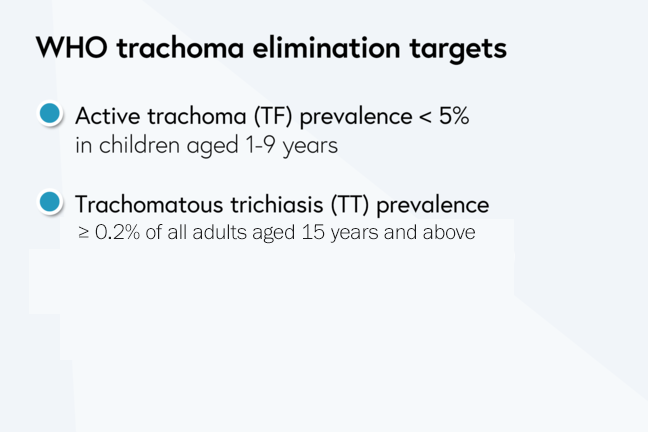 Key features of the survey

Mapping was carried out by 10 survey teams, each consisting of a GTMP-certified grader, a GTMP-certified recorder and a driver. Each team examined 1 cluster per day. Teams were assisted by a community health worker in each cluster and 3 senior staff provided supervision.

Trachoma was identified as being a public health problem in 6 districts in Malawi. All 6 had prevalences of TF and TT above the WHO-defined elimination targets. None of the districts were providing trichiasis surgery services at the time of the survey.

The mapping also provided data on access to water and sanitation in each EU.

Table. Trachoma endemic districts in Malawi identified by the GTMP

Based on the evidence provided by the mapping, a taskforce was formed involving all the key trachoma elimination stakeholders. 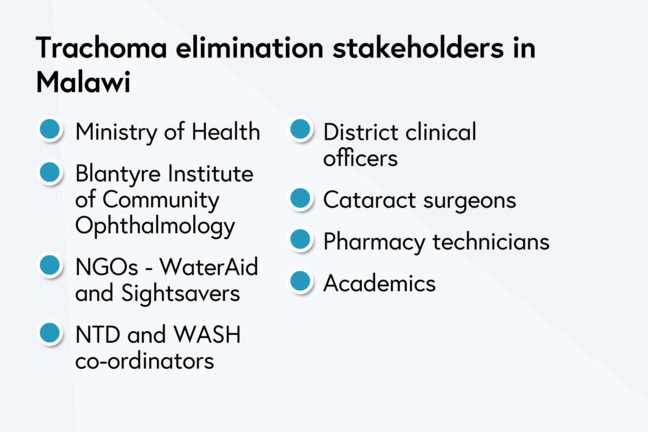 In 2014, the taskforce drew up a 5 year trachoma action plan (TAP) to implement the SAFE strategy to eliminate trachoma in the 6 endemic districts.

Mass drug administration with azithromycin was started. Mangochi and Machinga districts, which had TF prevalences of 5.0–9.9%, were allocated one round of treatment. The remaining 4 districts were allocated three rounds of annual treatment. Interventions to address facial cleanliness and hygiene improvements (F&E) were begun.

Supporting and implementing partners were identified and the Ministry of Health took on the overall co-ordination of the programme. Standardised reporting and monitoring tools were put in place and stronger links developed with district hospitals.

The Queen Elizabeth Diamond Jubilee Trust agreed to finance the entire Malawi budget over the 5 years 2014-2019 through a coalition of partners active in the country.

There is now an active trachoma elimination programme in Malawi. 1500 people with trichiasis have already been operated on and the Ministry of Health believes that the TT elimination goal will be reached by 2018, ahead of schedule.

The last planned mass drug administration will take place in October 2016. After this, a round of impact surveys will measure the prevalence of TF and a surveillance period will begin in districts that are found to have a TF prevalence of less than 5%.

In addition, stakeholders are working to jointly implement water, sanitation and hygiene (WASH) interventions in areas identified by the survey. These should have an impact on trachoma and other diseases of public health importance and improve the general quality of life for many people in Malawi.