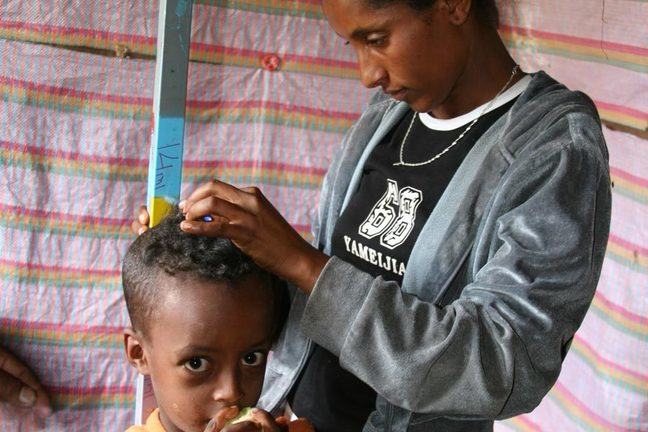 This article is adapted from two manuals, Zithromax management guide, published by the International Trachoma Initiative and Women and trachoma: Achieving gender equity in the implementation of SAFE, published by The Carter Center.

Studies have shown that height can determine dose safely and effectively. Wooden dosing sticks are used to indicate the correct dose of azithromycin in number of tablets or millilitres of paediatric oral suspension (POS).

To use the height-dosing stick, the person is asked to stand erect, without shoes on a flat floor. The stick is placed vertically against their back, with the ground end touching the floor. The horizontal level at the top of the individual’s head indicates the number of tablets or POS to be dispensed. Adults or children with disorders that prevent full extension should be given the same dose as someone of similar age and build.

If using a paper tape rather than a wooden stick, the tape should be fixed to a wall and the person can then stand next to the wall. Do not attempt to use a loose tape on its own as a measuring device. 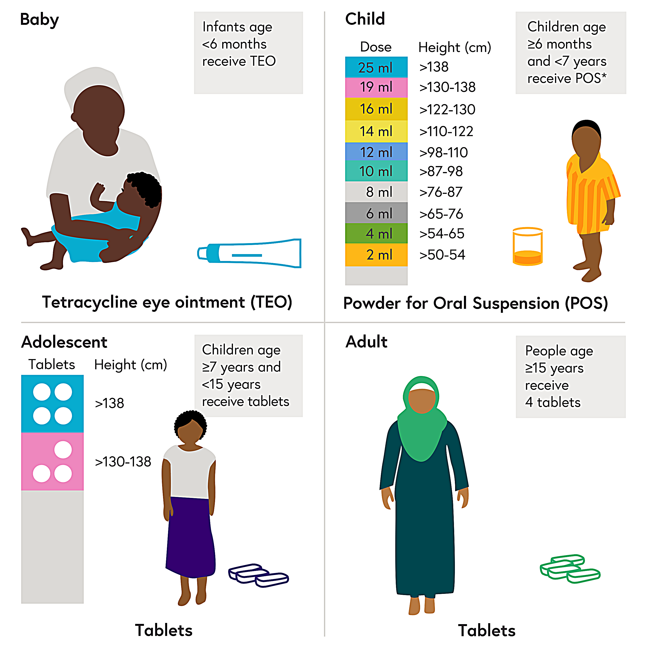 Children age ≥ 6 months and < 7 years receive powder for oral suspension (POS)*. The quantity of the dose is measured in millilitres (ml) and is determined by the child’s height which is measured in centimetres (cm) using a dosing stick.

* Note: Even if an individual is older than 7 years and tall enough to be given a tablet, if there is any concern that they may have trouble swallowing a tablet, powder for oral suspension should be provided.

Azithromycin is well tolerated with a low incidence of side effects. Communities undergoing treatment should be informed in advance that some people will have reactions. Encouraging families to eat breakfast on the day of treatment may help prevent stomach problems. Individuals who experience mild side effects should be reassured that their symptoms do not mean they should not take azithromycin in subsequent treatment rounds.

A serious adverse event is an adverse experience following drug treatment that results in one of the following:

Communities undergoing treatment should be informed about what to do if a serious adverse reaction to azithromycin happens, even though this is extremely uncommon.

If a serious adverse event does occur, community directed distribution team members should ensure that the people affected visit a nearby health institution for immediate care. They should also immediately report the event, in detail, to country programme managers who then report on the incident to the ITI within 48 hours.

Initiating antibiotic distribution in a trachoma-endemic setting offers unique challenges. Many communities have no experience of the concept of mass distribution of a medicine to treat a condition that affects only some members of the community.

Why should all members of a community take a medicine when not all of them are ‘sick’? Misunderstandings, political shenanigans and rumours have wreaked havoc on antibiotic distribution efforts in a number of settings. In most cases, the end result varies according to social and political divisions within communities. These divisions are often based upon gender roles and responsibilities.

If unfounded rumours arise that might keep individuals from receiving treatment or damage the reputation of the MDA campaign, it is important to first analyse the situation before moving quickly to respond.

An experience from Egypt

Right before the distribution was to start, rumours erupted among villagers suggesting that the drug was going to blind people within three days and that deaths occurred in other villages when, in fact, this was to be the first distribution. The distribution ended with 62% coverage, almost identical for preschool children, school-age children, and adult women (all ~69%) but much less for adult men (48%). Refusals were generally amongst whole families rather than from individuals. Many men were away in the fields or working elsewhere when the teams were doing door-to-door distribution, and some women were unwilling to accept treatment without the agreement of the male head of household. When one family refused, this information spread quickly, and nearby families generally also refused.

Subsequent rounds focused on changing the time of distribution to make sure that men were present when teams visited. The second round of distribution succeeded in increasing coverage; however, coverage among adult men never reached more than 65%. The importance of understanding community perceptions and the role that gender plays in adoption of new technologies such as mass distribution cannot be underestimated.