So far you have looked at the big picture of arable farming. In this Step, the focus will be narrowed down to wheat, looking at the processes involved in planting, treating and harvesting this popular grain.

As a staple food wheat provides approximately 42% of global average calories consumed each day. Rice provides 43% (on a 1259kcal diet). 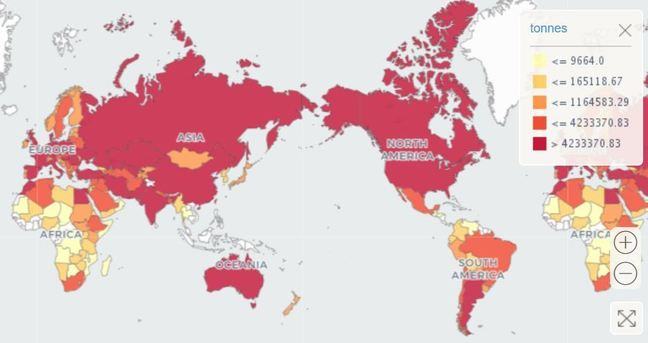 How wheat is grown

In order to minimise the risk of their yields falling short of target due to bad husbandry or weather [3], farmers can choose between two types of wheat:

There are four basic farm operations in growing wheat and other arable crops [4]:

Wheat is propagated by seed. Farmers look for a well-established variety or one that responds well in their particular conditions. Varieties vary according to maturity and harvest time, the yield level or type of grain (different types of grain are suited for different uses), and the level of resilience that may reduce maintenance and management costs [5]. There are thousands of varieties that have different properties, such as drought resistance, disease resistance and suitability for fodder of food. [6] [7] [8].

One of the most important activities in arable farming is mixing (tilling) and turning the soil over (ploughing) at various depths [9] prior to sowing. In the past, intensive ploughing served as a de-weeding method. However, there is increasing interest in the use of minimum tillage and low tillage systems (conservation tillage methods). It has been observed that intensive tillage disrupts the natural recovery and resilience of the soil in the long run [10].

Firm, smooth, well-drained fields are preferable. Ideally, soil and air temperatures should still be warm (15-25°C) when sowing winter wheat. This helps seedlings to emerge quickly and develop a strong root system before they enter a longer growth phase in low temperatures during the winter. Older methods, using animal power (Figure 2) for ploughing, have been replaced by machines that perform the task with greater precision (Figure 3). 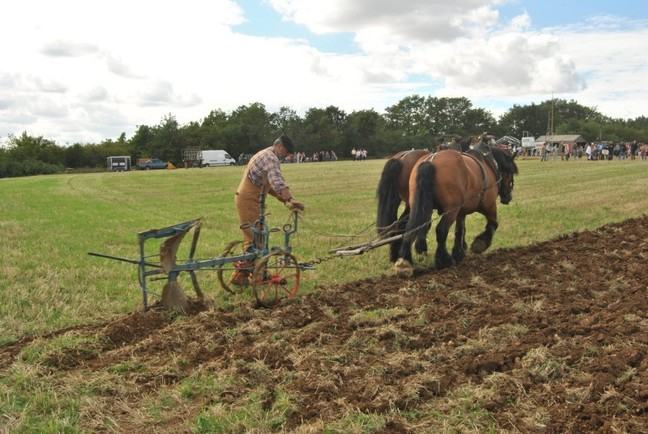 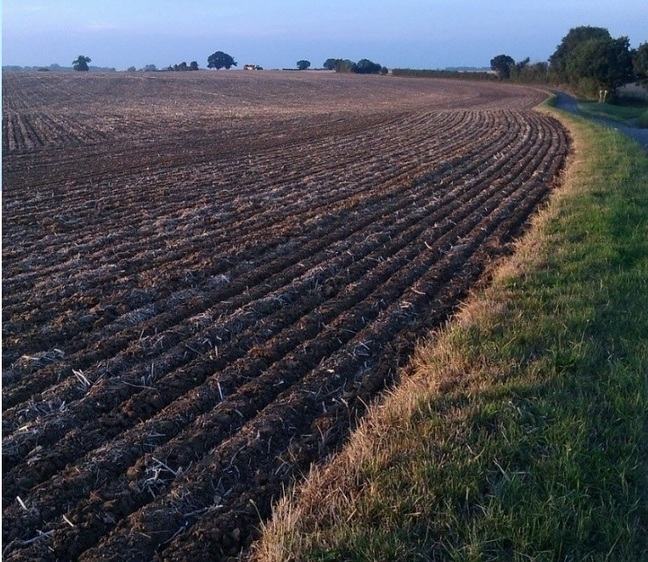 In spring, farmers evaluate their crop and assess ‘winter kill’ which may have occurred as a result of low temperatures. Nutrient deficiency is detected by analysing a sample of the crop. Farmers have a variety of choices to source nutrients from: synthetic fertilizers, manure and other farm by-products containing nitrogen and sulphur [11] [12]. An example of a sprayer applying nutrients (or herbicide) can be seen in Figure 4. 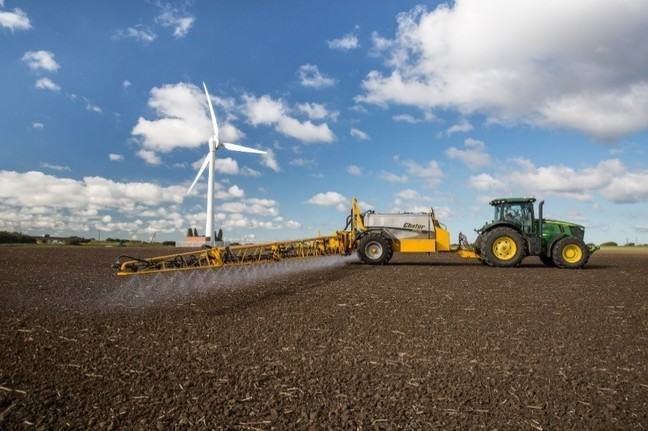 Figure 4: A sprayer attached to a vehicle can skim through vast areas of land to cover soil evenly. © Chafer machinery Source

The most important leaf on a wheat plant is the ‘flag leaf’. This is the last leaf to be formed and so the youngest and nearest to the ear. Its protection is important to achieve high grain yields. It produces at least 75% of the plant’s fuel through photosynthesis. If the conditions near the flag leaf are warm, wet and humid, fungi and other diseases can develop [13] (Figure 5). 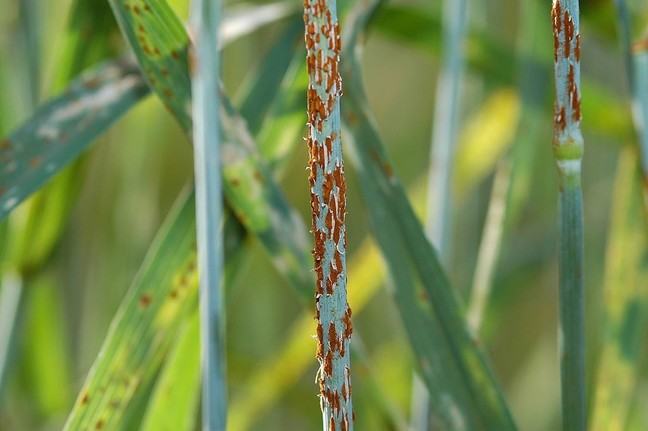 Application of herbicides for weed control is widely accepted as a cost-effective and targeted treatment, but resistance can develop. Insects can be harmful to the crop (eg aphid, slugs and leatherjackets [14]) but not all insects cause damage and some can help control or deter the harmful ones. A growing number of farmers nowadays plant flower strips along the borders of their fields to attract these and other natural enemies. Decisions about control methods have to be based on both economic and environmental factors.

As wheat reaches maturity, grain filling takes place. During this process, nutrients produced in the plant are transferred to the grain and stored there as starch for approximately 45 days [15]. The amount of absorbed nutrients determines the size and therefore the yield of the crop.

Wheat reaches maturity when the spikes turn yellow and this is the time for harvesting (Figure 6). Technology allows farmers to harvest quickly using a combine harvester to cut, separate and clean the grain at the same time in a synchronised manner on the field (Figure 7). 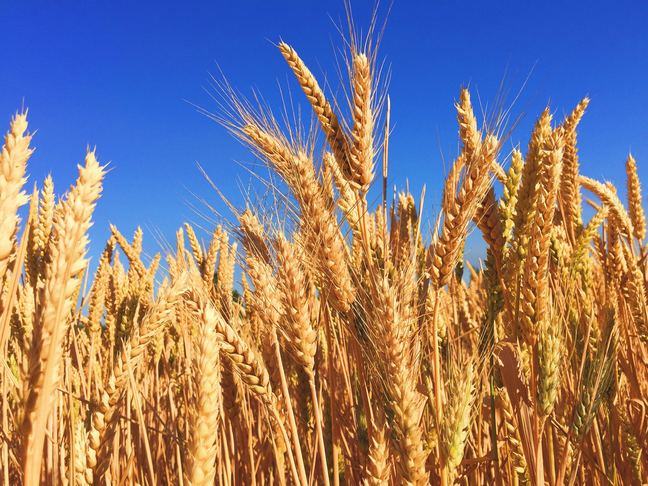 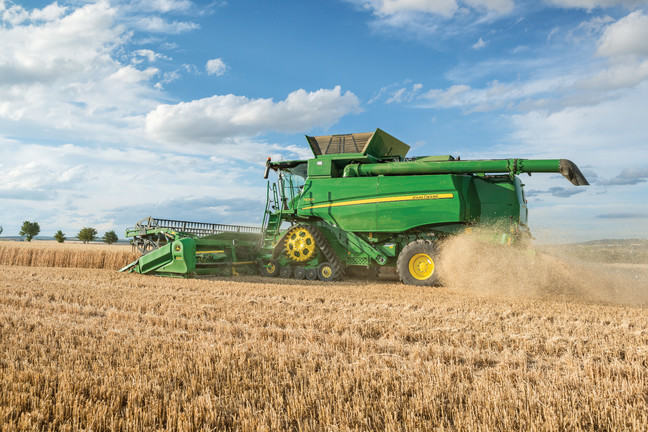 Figure 7: A combine harvester has automated the process of cutting and separating and cleaning a cereal crop in one operation © John Deere