This content is taken from the University of Southampton's online course, Exploring Our Ocean. Join the course to learn more.
View course
4.12

We learned in the previous week that the symbiosis of corals with photosynthetic microalgae is vital for the formation of warm water reefs in the shallows. Unfortunately, the relationship between these partners is rather fragile. In this step Professor Jörg Wiedenmann and Dr Cecilia D’Angelo explore the process of coral bleaching and its impact on reefs.

Under the impact of environmental stress, the symbiosis breaks down and the algal partners are lost from the tissue. Along with the symbionts goes the brownish appearance of the corals. As a consequence, the white calcareous coral skeleton shines through the mostly transparent host tissue, giving the corals a whitish appearance. This phenomenon is termed coral bleaching.

A bleached colony of the staghorn coral Acropora sp. The white coral skeleton shines through the host tissue depleted from symbionts and their brown pigments. At this stage, the coral animal is still alive. Photo by J. Wiedenmann & C. D’Angelo © University of Southampton 2019.

At this stage, the coral host can be still alive and bleaching is not always be a death sentence for corals. If the stress event was mild enough, corals can re-establish the symbiosis with their algal partner. We could recently show that one route of recovery might be through symbionts surviving in deeper layers of the coral tissue. 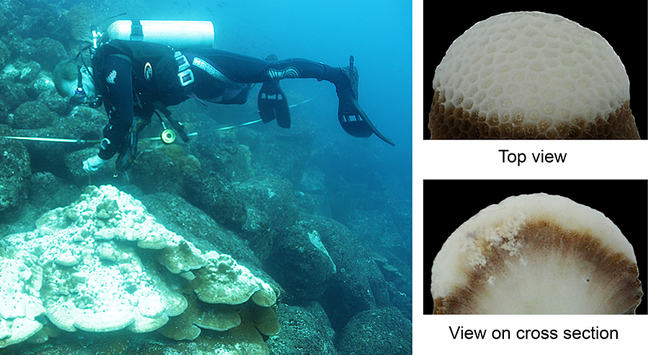 A partially bleached colony of a Porites corals from the Galapagos Islands analysed after a brief heat stress episode during the 2016 El Niño temperature anomaly (left photo). The upper parts of the partially bleached colonies look white from outside (upper right photo). However, the brownish colour of deeper tissue layers shown in the cross-section of a coral fragment reveals that live symbionts are still present deep inside the bleached colony parts (lower right photo). Photo by J. Wiedenmann & C. D’Angelo © University of Southampton 2019.

However, if the corals are unable to re-establish the symbiosis they are vulnerable to starvation and diseases and will rapidly die. Subsequently, the coral skeletons will be covered by algae, changing their appearance to a greyish-green colour. 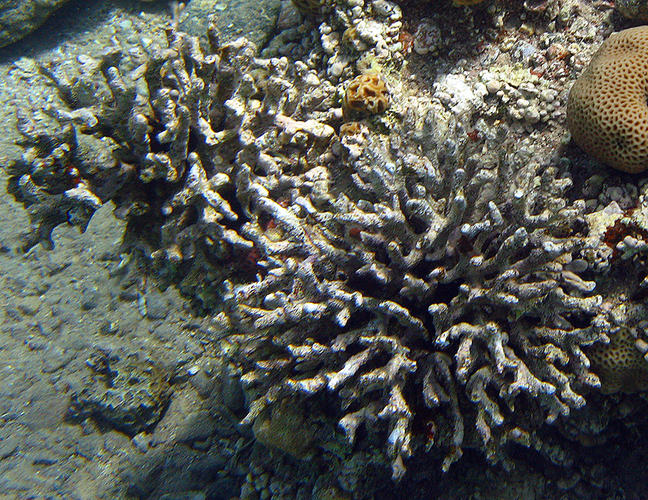 Dead skeletons of the coral Stylophora pistillata adopt a greyish colour after the loss of live tissue. Photo by J. Wiedenmann & C. D’Angelo © University of Southampton 2019.

Once the live tissue is gone, the coral skeleton is exposed to the eroding forces of the environment. As a consequence, the three-dimensional framework of the reef will break down within a few years, and much of the biodiversity that depends on this structural complexity gets lost. 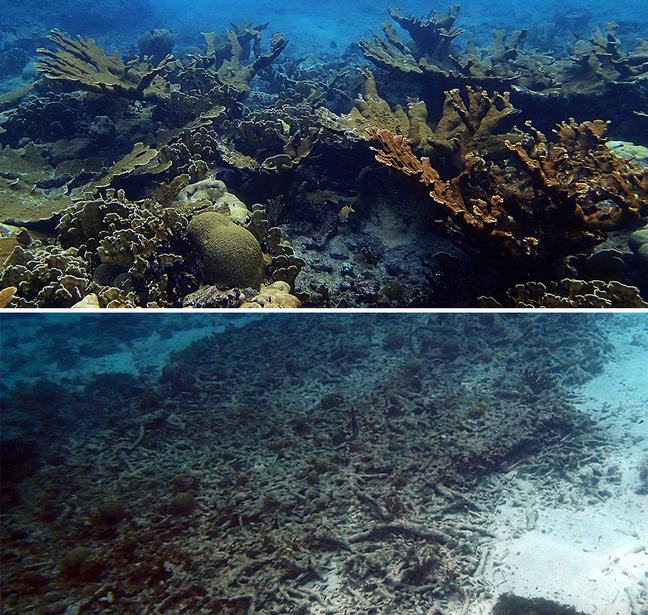 The key trigger of coral bleaching is heat stress. If temperatures exceed the long-term average of annual peak value of a certain reef region by only one degree for a few days to weeks, corals will start to bleach. At the molecular level, the heat stress causes damage to the photosynthetic apparatus of the symbionts. It is thought that the symbionts start to release harmful oxygen derivatives into the host cells under these conditions so that the previously beneficial partners become toxic for the host. As a consequence, the symbiotic relationship breaks down and the symbionts are be lost. Due to the involvement of the light-dependent symbiont photosynthesis in the process, exposure to sunlight can aggravate the bleaching response.

Our research at the University of Southampton has shown that the disturbance of the natural balance of the dissolved nitrogen and phosphorus nutrients in the water can render corals more susceptible to heat-induced bleaching. In fact, when corals are deprived of phosphate, the bleaching may occur at ambient temperatures. However, raising nutrient concentrations in the water will not necessarily render corals more tolerant to heat stress as numerous side-effects of elevated nutrient levels in the water will likely accelerate the degradation of reefs.

The temperature at which corals and their symbionts become stressed depends on environment to which they are adapted in long-term evolutionary processes. The most heat tolerant coral symbiont of the world, the species Symbiodinium thermophilum has been discovered during our research in the Persian / Arabian Gulf. This species can stand summer temperatures of up to 35˚C on a regular basis, temperatures that cause bleaching and coral mortality elsewhere on the planet. 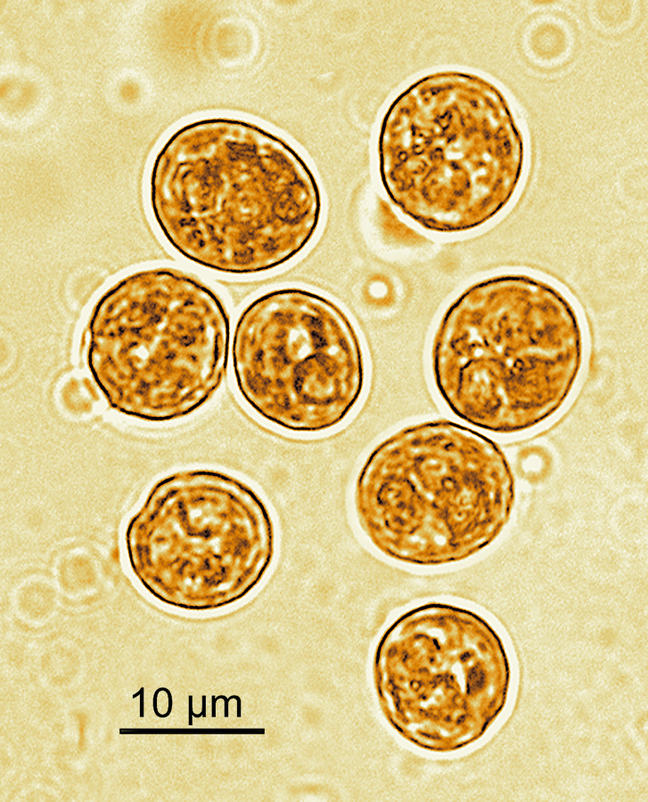 However, corals associated with this algal symbiont will bleach when the temperatures exceed the usual summer maximum. We found that potentially thermotolerant symbiont species exist in small numbers in reefs that are currently dominated by heat sensitive symbionts and they may help corals to adjust to higher temperatures. However, even if this adaptation works, the most diverse reefs are still likely to lose 90% of their coral species that form the basis of many ecosystem services. 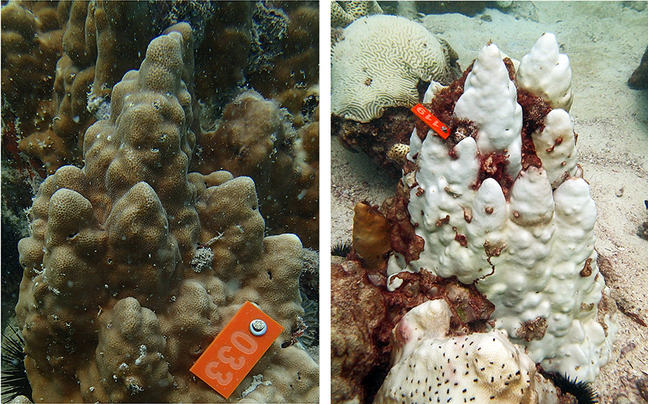 How can we save coral reefs?

At the moment, the most important solution is to halt climate change by establishing carbon neutral societies. At the regional level, a managed and sustainable use of reefs that ensures best-possible water quality and prevents overfishing can help corals to resist temperature stress.

Read these suggestions from the National Oceanic and Atmospheric Administration and the International Coral Reef Society for ideas that all of us can do to help to save coral reefs.