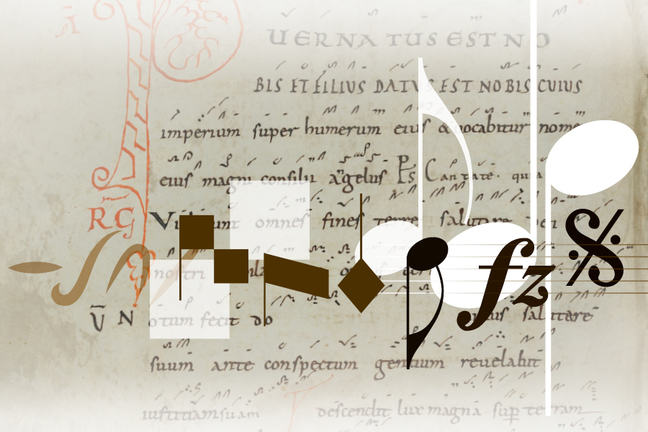 How does this course work?

Thank you for enrolling in our course on musical notation from the Middle Ages. We are very much looking forward to working with you over the next four weeks. During this time you will gain an understanding of how medieval musical notation works, how it can be decoded, and how its signs and symbols were conceived through history.

Musical notation is more than just a system that fixes sound on paper in order to be used in a performance. It is also a fascinating, material-based cultural technique that has evolved throughout history. Musical notation discloses many different ways in which the sound of music may be visualised. This course approaches musical notation as a practice that creates meaning: the way people wrote down music reveals a lot about how they conceived of music through all the centuries.

Throughout this course, you’ll get acquainted with some of the most important European systems of musical notation from the Middle Ages. The course includes findings that stem both from the theory of images and from sign theory. They help you to handle these notation systems with ease and discern their distinctive features. As you learn how musical notation evolved through history and as you reflect on their use, you will gain insight into what it means to perform music in a historically informed way. You will be able to look at musical signs with fresh eyes – and to hear music with fresh ears. Besides the theoretical and practical parts, this course offers recordings of ancient music performed by musicians of the Schola Cantorum Basiliensis, the renowned institution for ancient music in Basel, which will give you the opportunity to listen to some of the musical pieces we will discuss during the coming weeks.

We shall cover important steps in the early history of musical notation. There will be plenty of practice activities, including quizzes for checking your own improvement. You will also be invited to discuss each topic with your peers.

This online course won’t make you an expert music philologist, but it will give you a solid basis to build upon in the future. After completing this course you will be able to transcribe medieval into modern notation understanding the visual logic that was applied at the different stages of music notation. To be sure, transcribing ancient music should not be an end in itself. Instead, it should throw light on how musicians from the past understood and conceived the composition of music. You will learn how to read the original notational signs in order to gain access to the music. This is the central concern of this course and, in a broader sense, of music philology in general.

In the ‘downloads’ section below you will find a glossary which explains the most important terms we will use throughout the course.

This is how the course is structured:

In the first week you will get a general overview of the main questions of this course focussing on visual theory and the materiality of musical writing.

Week 2: ‘From sound to ink’ – early forms of musical notation

During the second week we are going to deepen our analysis of the earliest manifestations of musical notation in the Middle Ages. We will start with neumes and proceed with square notation.

Modal notation, used in the early 13th century, is one of the oldest systems of encoding musical rhythm. This important step in the history of notation will be studied in the third week together with the basic principles of transcribing medieval notation.

In the late 13th century, rhythm started to be codified in the shape of the notation symbols. This historical shift in the evolution of musical notation will be the subject of the fourth week. Furthermore we will deepen our technique of transcribing mensural notation.