In addition to showing us beautiful music examples, the preceding steps were mostly concerned with how different forms of tablatures work. Let us now focus on why tablatures were made. Along the way, we will try to understand, on a more theoretical level, the differences between the forms of notation we got acquainted with in the last weeks and tablatures.

The primary reason for developing tablatures may be a very obvious one. Polyphonic music was usually performed by singers or players of melody instruments reading their respective parts from a book or from partbooks like the ones we saw in the last steps – or, alternatively, they learned their parts by heart from one or the other. On the other hand, instruments capable of playing polyphonic music, were not able to play from all parts at once. In order to play all parts at the same time, instrumentalists had to recourse to something that had not been in use since modal notation had ceased to be employed – the score. By notating all voices of a piece on the same page, the eye could see all of these voices simultaneously. While the fact that all voices of a polyphonic piece are visible at the same time seems to be the most natural thing for modern pianists, harpists, guitarists and other players of polyphonic instruments, this was far from normal at the time when tablatures first began to be used. The process of bringing together all voices of a piece in a synoptic way was termed intabulation after the tabula, the table or tablet on which all voices were combined.

In addition to their synoptic nature which was essential for instrumentalists to be able to perform polyphonic music, tablatures possessed specific qualities which made them especially well suited to the instruments they were devised for and which fundamentally distinguish them from the vocal notations we saw in the past weeks. While vocal notation was theoretically playable on a wide range of melody instruments (including the voice), tablatures contained elements that gave particular indications for their respective instruments. We call notations with a large number of these specific instrumental indications operational notations because they mostly indicate exact operations on an instrument. Notations with a small number of specific indications are symbolic notations. These can be interpreted by many different instruments as well as the voice.

In keyboard tablatures, these particular instrumental indications were fairly scarce which, in theory, made them playable on other instruments, too. 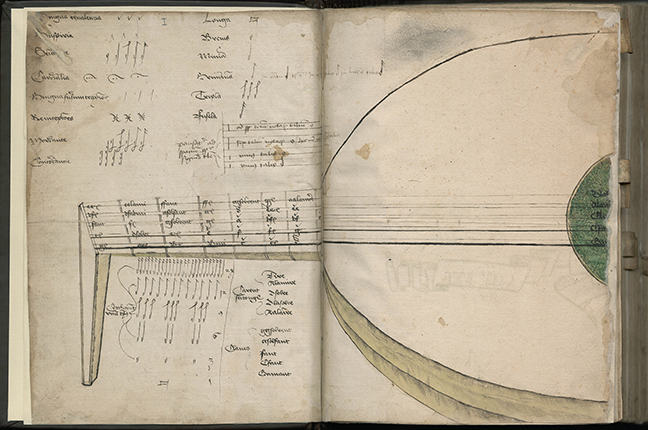 Still, the letters devised in keyboard tablatures, along with the synoptic notation that we still use today for keyboard music, made it especially easy to play music notated in this way on keyboard instruments, as it was often possible to use one hand for one part. The letters used in keyboard tablatures signified both specific keys on the keyboard and abstract locations in the western tone system, which made them operational and symbolic notations at the same time.

Lute tablatures, on the other hand, are highly operational. It was only possible to realise them on one instrument (or on very similar instruments) in a particular tuning. The main reason for this is that lute tablatures define particular places on the strings to be pressed down and say nothing about sounding pitches. In that regard, they resemble ‘paint by number’ pictures – it is hard to imagine how pieces notated in lute tablature sound before one plays them (unless you are very familiar with the instrument).