The ligatures by Franco of Cologne: mensural rules II

With the notational reforms of the second half of the 13th century the musicians adopted a notational system that permitted to deduce the note values by the shape and form of the ligatures. The remnant ambiguity of the pre-Franconian ligatures lasted until Franco of Cologne fixed a definitive and clear-cut system of ligatures. With Franco’s most prominent notational reform a unequivocal system to distinguish rhythmic combinations of short and long note values was fixed.

Musical notation has always a practical function: composers, singers and musicians have to deal with it in a pragmatic and efficient way. Ambiguous notational signs were always a problem. Also the ligature system you discovered earlier was not ideal for the musical practice. As can be seen in the table of the previous step the pre-Franconian ligatures used in the earlier parts of the Codex Bamberg (Staatsbibliothek, Lit. 115) and Codex Montpellier (Faculté de Médecine H 196) still remain slightly flexible in their meaning, allowing different readings depending on their contexts.

Looking back, they can thus be considered some sort of transition towards the fixed ligature rules which were set by Franco of Cologne in his treatise Ars Cantus Mensurabilis (around 1280) and which, in their strictness and clarity, brought a new notational flexibility that ended the constraints of the modes. 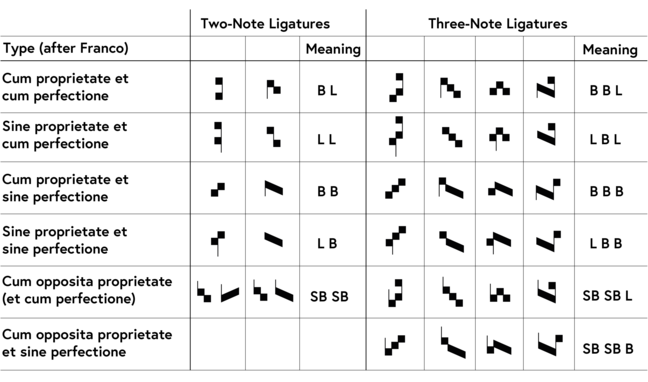 Ligatures written according to the rules of Franco of Cologne. Signs become distinct. L = longa; B = brevis; SB = semi-brevis click to expand

Let us take the pes as an example. If the second note was turned right, the ligature lost its perfectio and had to be read brevis-brevis. If one added to this modified pes a stem on the right side of its first note, it also lost its proprietas and was thus read longa-brevis. If such a stem was added to the right side of the first note of an unmodified pes, the ligature lost its proprietas but kept its perfectio and hence signified longa-longa. An upward stem at the beginning of the ligature indicated opposita proprietas (opposite property) and, like in pre-Franconian ligatures, produced two semi-breves.

Ligatures with three or more notes functioned according to the same principles that are shown in the table above. Middle notes were always regarded as brevis unless a downward stem was drawn on the right side of any note within the ligature. The upward stem at the beginning of a note (opposita proprietate) was only applied to the first two notes in the ligature, turning them into semi-breves.