This content is taken from the University of Exeter's online course, Future Food: Sustainable Food Systems for the 21st Century. Join the course to learn more.
View course
1.9

Dietary guidelines for health and sustainability

As we just heard in the video, people in developed countries, and those undergoing a ‘nutrition transition’ in developing countries, are eating too much red meat, saturated fat, processed foods and not enough natural foods high in nutrients and fibre. These ‘western diets’ are not just bad for our health; they are also disastrous for the planet.

A recent analysis of food intake data from 150 countries concluded that, in high-income countries, a quarter of GHG emissions are related to producing the food we eat. More than half of these emissions are caused by meat and dairy farming, with beef and lamb being the worst offenders. If people switched to healthy and more plant-based diets we could halve the greenhouse gas emissions of the food system.

Of course, food production has many other environmental impacts, on water and soil resources and biodiversity, for example. When these are taken into account, the take-home message is clear. In the words of food author and activist Michael Pollen: “Eat food, not too much, mostly plants.”

Many countries have government-issued guidelines for healthy eating. In the UK we have the Eatwell Guide, shown below. Such guidelines indicate what proportion of the diet should come from different food groups 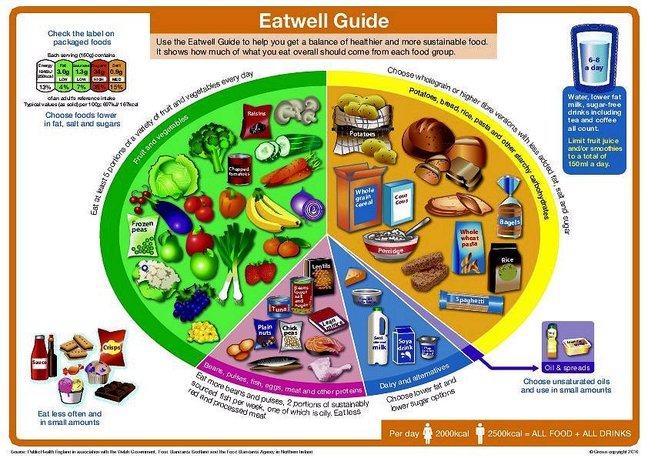 But is this healthy diet also sustainable? If the British followed this Guide instead of the average diet they would reduce their environmental impact (GHG emissions, water and land use) by a third.

However we could do even better. Recently, experts integrated health and sustainable dietary advice into one optimal diet that meets both goals. The EAT-Lancet Commission had 37 experts work for 3 years analysing the best available data from around to the world, resulting in the “planetary health diet”. Here are the recommended percentages and portions equivalent to what you’d eat in a day. These may look a bit impractical but the idea is to convert them to weekly proportions (e.g. one egg a week) in your actual diet. 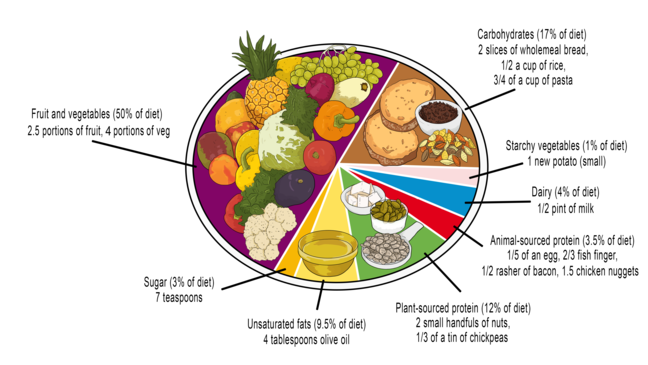 And here is the same dietary advice shown as actual amounts with the recommended weights (in grammes) equivalent to what you’d eat in a day: 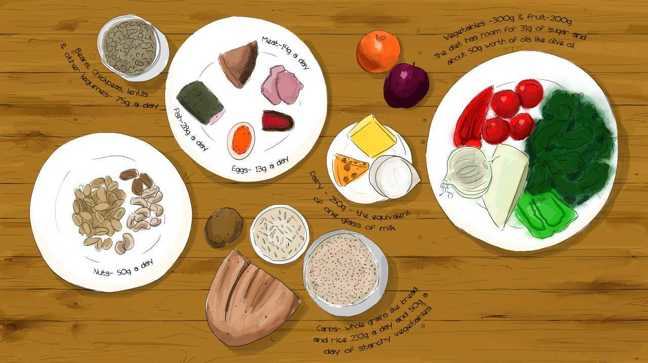 If everybody switched to this diet, global GHG emissions would be reduced by 60% (50-80% depending on country) and premature deaths by 19%.

How would you cope with this diet? In the next activity, you will get a chance to find out more! Why don’t you try it and find out?